Merlin Club: The Darkest Hour or The One Bron Phones in for Reasons Listed Below

Okay, my loves, here's the deal, the last two weeks have kind of blown with family and work drama - much of it good, some of it less than good, and in the last five days, there have been two oral surgeries in this house - two kids and 8 impacted wisdom teeth. And now? I'm getting sick. My throat is swollen, and I'm pretty sure I'm running a temp, so this post is going to be so, so short.

This was another two-parter. It's a year later, Arthur is ruling by proxy since Uther is a shell of the man he once was and basically sits in his jammies, stares out his window and refuses to eat. Arthur's got his Uncle Agravaine there to help, but he's super sleezy.

Morgana is nowhere to be found (until of course Sir Leon and some other knights find her) and she kills two of the four of them by throwing them around with her magic. She's heading to the Isle of the Blessed with Morgause so she can sacrifice her sister and the entirety of Camelot can be killed off by Dementors. (called something else, but fever brain cannot remember)

Oh yeah, Uncle Sleezewad is totally evil and in cahoots with Morgana.

I'm bummed that I feel like ass, because I actually like a lot of stuff that goes on in these episodes, but blergh. Okay, so the questions.


1. If I’d written this episode...There would be better explanations for shit. Where have Morgana and Morgause been for the past year? Why is Agravaine all Team Morgana?
2. The thing I loved/hated most about this episode.
Loved: There are a ton of things I loved about this episode. I loved that Arthur was willing to sacrifice himself for his people and that Merlin was ready to sacrifice himself for Arthur and he almost did. I also loved how worried Arthur was about Merlin surviving.
Hated: I can't stand Agravaine. He's the douchiest douche who ever douched, and I don't think his reasons for wanting Morgana on the throne are ever adequately explained.

3. Something you’ve never noticed about this episode before. How Gwaine is basically Winnie the Pooh eating honey from a tree and getting attacked by bees.

4. Favorite Costume. Going with the Cailleach. Nothing says evil like cheesecloth that's been dyed black. But whatevs, it works. 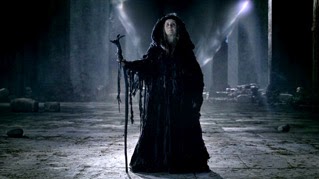 5. Here is proof of some random head canon I’ve created. Not mine, but there are definitely some Merthury moments in this one.

6. What Merthur moment did Jess have the naughtiest thoughts about? I think she had all the feels when Merlin and Arthur were having their heart to heart talk before Merlin jumped up to protect Arthur from the Dementor.

7. What made Jen lose her shit (in a good or bad way) in a bad way? The way magic is just not as scary and all powerful as it was in the last three seasons.

Gwaine as Winnie the Poor just delights me. :)

Or Winnie the Pooh. (damn it, fingers)

High, girl!
While I realize my penname is quite morbid, yet,
you shall find in our blogs a lotta (subliminal) moxie
which has taken this sinfull mortal yeeeeers to compile:
I lay it ALL out for you, dear, with All-Star-Oxygems:

Wouldn’t ya love an endless eternity
of aplomBombs falling on thy indelible cranium?
An XtraXcitinXpose with no
zooillogical-expiration-date?
An IQ much higher than K2?
An extraordinarily, anti-establishment victory??
Here’s what the exquisite, prolific GODy sed
(with a most excellent detector of bull§ht):

“Faith, hope, and love,
the greatest of these is love -
jump into faith...
and you'll see with love”
Doesn’t matter if you don’t believe (what I write);
God believes in you.

Do it. Do the deed, dude. Sign into the Big House.