Perhaps the best gift of the year

I'm over at Writer's Evolution today discussing blessings in disguise and the best gift I've received in a long time. Please stop by and say hi. :)
Posted by Bronwyn Green at 7:58 AM No comments: 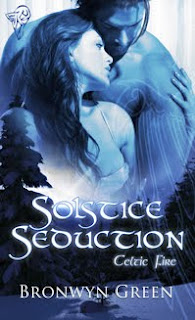 In other news, I'm about to crowbar my children out of bed so we can go help a friend move. I've kinda been missing the snow this winter since we've had so little, but right now, I'm thrilled. Moving with blue skies and sunshine is way better than moving in the middle of a blizzard, so thanks, weird weather pattern!

Here's the blurb - I hope you're all having a fantastic day!

Book one in the Celtic Fire Series

Is love enough to redeem the fallen?

Banished from Heaven as punishment for his sins, Taliesin has walked among humans for thousands of years. He's damned sick of it. Death would be preferable to the cultural bankruptcy of the twenty-first century, but what's a cursed immortal to do? It's not like he can kill himself.

Dr. Emerson Matthews has no clue what to do with the enigmatic, gorgeous man who has landed in the psych ward at the hospital where she works. Well, she knows what she wants to do, but it's unethical and likely illegal. Especially since he seems to be out of his mind. Why else would he claim to be a fallen angel?

Hell bent on seduction, Taliesin tempts Emerson, luring her tightly guarded passion to the surface and introduces her to sensual delights she's never dreamed of. As she learns more about the mysterious man in her care, she begins to question her own sanity as his claims of Divine origin seem more plausible with each passing moment.

Made that one myself...

So Killian was looking at a Christmas card from one of my brothers and his family.

It was signed Love, The Green's

Yep, that's the one I have. Gotta say, I'm really delighted that he knows the difference between plural and possessive.

I'm hoping that everyone has a wonderful weekend no matter what you celebrate! Wishing you peace, love, laughter and a wonderful time with the people you love! 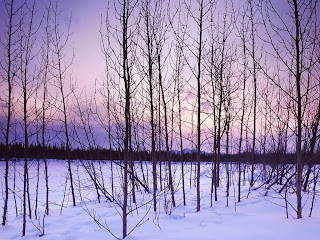 Labels: apostrophes, the one I have

The Weird and the Awesome

This is sort of a hodgepodge post with random bits mostly because I'm running around like a madwoman trying to get stuff done. There's nothing like trying desperately to finish Christmas gifts that still need to be mailed and write a book with a fast approaching deadline. Guh. But I digress...and whine.

First the weird, I got a package addressed to me the other day from an Irish gift catalog. I thought it was odd since I hadn't ordered anything from them, but I thought...okay, maybe it's a gift from somebody. So, I opened it up and found three linen tea towels. Three identical linen tea towels
with a map of Ireland on them. 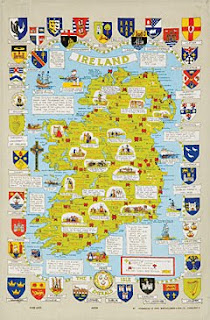 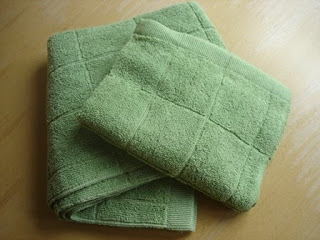 (For those who are wondering about the difference between a tea towel and a dish towel, here's an illustration. Dish towels are small and usually made of terrycloth. Tea towel are about twice the size and made of linen. But they're both handy for drying dishes. Tea towels are much more common in Europe, I think - you don't see a lot of them in the states. But I digress. Again.)

So I called the company to find out WTF, and they insisted that I'd purchased the towels. I told them I was sure I hadn't. The rep insisted some more. I denied some more. Then I remembered. No, not that I'd bought three identical tea towels. I remembered the other Bronwyn Green. The same one who terrified me when I was pregnant.
.
I went in for one of those non-stress tests when I was nine months pregnant with Corwin. I gave the receptionist my name and date of birth and the following conversation ensued.

Receptionist: Right. You're having twins.

Receptionist: (squinting at the chart, then looking at my belly) Your due date is St. Patrick's Day, right?

Receptionist: And your birthday is June 3rd?

Receptionist: (far too brightly) You're having twins.

Me: Oh hell no! I'm so not having twins!

Receptionist: (less sure of herself, holds up a chart with an ultrasound picture) See? Twins.

Me: (bursting into horrible, sobbing, pregnant tears in a waiting room full of people) But I don't want twins! I can't handle twins. Don't you understand? I have a two year old and seven daycare children at home. I can't have twins! I will absolutely lose my mind! I don't have that kind of energy. I can't do it! You can't make me!

And that's when the nurse came out and told me it was time for my test.

We finally figured out that there was another Bronwyn Green who lives in my city, was also pregnant (with twins) and who shared my birthday. I'm guessing I got the tea towels meant for her. Better than her twins, though!

For those who are unfamiliar with the term yooper, it refers to someone who lives in Michigan's Upper Peninsula. You might be wondering what yoopers call those of us in the Lower Peninsula. Well, I tell you. We're called trolls. 'Cause we live "under" the bridge. But I digress. Yet again.

I'm sure there will be more YMs in the future - lol!
Posted by Bronwyn Green at 6:52 AM 6 comments:

I'm all over the freaking place - literally and figuratively!

So, today I'm off to the lovely town of Saugatuck to see a friend I haven't seen in ages. It should be fun - we're sewing new curtains for her new house. Have sewing machine - will travel. That's my motto. So anyone need any mending down while I'm on the lake shore?

Just in time for holiday reading, the fantasticly awesome Chris is giving away a copy of my recently expanded re-release, Solstice Seduction from TEB. Stop by and comment to win a copy! Also, comment on Anna Mayle's contest while you're there to win one of the best damn books I've read all year!

The ever lovely Julia Rachel Barrett is also featuring Solstice Seduction on her blog and I'd love it if you stopped by and said hi!

And last, but definitely not least, fellow Michigan writer and Grand Rapids Region Writer's Group member, WS Gager is blogging about twelve writers who have impacted her writing career and I made her list. She says the sweetest things!

Derp! Wait - there's one more place! I'm over at the Writer's Evolution blog today talking about holiday traditions. Check it out for a cute, easy craft project to do with kids - makes a great grandparent present! :)
Posted by Bronwyn Green at 3:11 AM 3 comments:

A few days ago, I at one of the local Meijer stores with Mia (if you're not familiar, think Target...with groceries) and we spotted a display of Santa Clauses. There were traditional Santas, St. Nicholas type Santas, skiing Santas, woodland Santas, fishing Santas wearing a vest and a floppy fishing hat, hunting Santas wearing camouflage holding a rifle, and then...there was this guy. 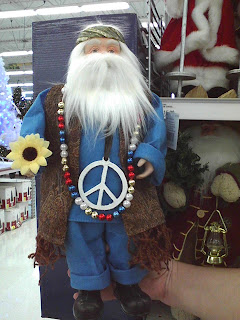 Now, I admit, I have a certain fondness for hippies. It could be because of the guy who used to work at the daycare center I attended as a child and sang us Eagles songs on his acoustic guitar. It could be all the delicious homemade granola my mom made for us when we were little. It could even be tambourine playing-rock band groupie-skirt and scarf wearing (her collection rivaled Stevie Nicks') Aunt Malita.

However, I'm not sure how I feel about this guy. Don't get me wrong, I'm all about peace, love and understanding and also the joy of Christmas...but I think I find hippie Santa both awesome and disconcerting. Or maybe, awesomely disconcerting.

What do you think of him?
Posted by Bronwyn Green at 3:51 AM 9 comments:

With every mistake, we must surely be learning... 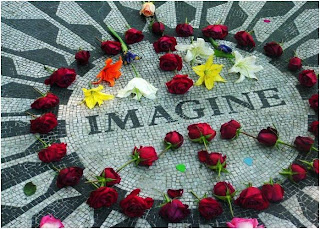 EDIT: It was pointed out to me (Thanks, Jen!) that While My Guitar Gently Weeps is a George Harrison song, sooooo Beatles fail for me. But I still love it. And I feel strongly about the sentiment - I sure as hell hope we're learning anyway...

The Naughtiest Kitties Ever

Willow and Morrighan are thrilled that the holidays are here. This means their favorite jungle gym is back in the living room and available for their climbing pleasure. 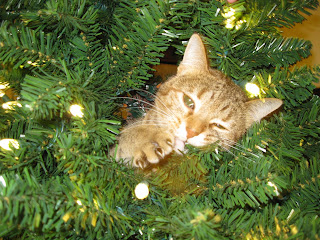 Willow gnawing on the branches...nothing says Happy Holidays like a little cat drool. 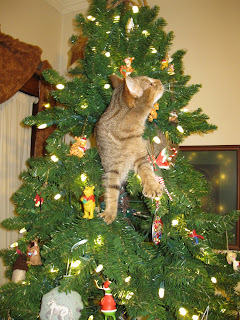 Willow contemplating the best way to get to the star at the top. 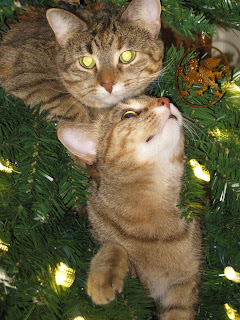 Morrighan joining her sister on the next branch up. 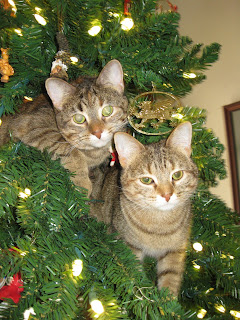 No fragile ornaments on the tree this year... 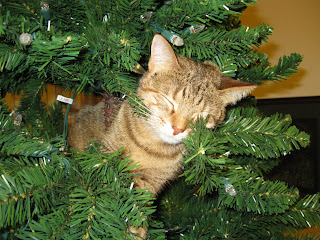 Willow's all tuckered out from her epic climb. She actually slept in the tree the first night it was up.
Posted by Bronwyn Green at 8:05 AM 33 comments:

Two new books out today by two of my favorite people!

Two of my favorite people Brynn Paulin and Abigail Barnette a.k.a. Jennifer Armintrout both have books out today from Resplendence Publishing!

Brynn's book, Blood of the Wolf, is the third story in her Creuntus Dragons series, and I've gotta say, it's the best one yet! 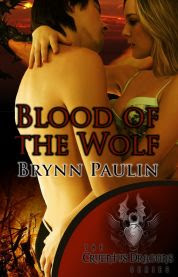 Abigail's book, Glass Slipper, is the first of her Naughtily Ever After Series and it's a hot retelling of Cinderella. I can't wait for the next one! 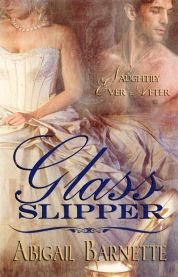 Both books are awesome and I highly recommend them both!!! So what are you waiting for? Go get your copies!!!
Posted by Bronwyn Green at 8:33 AM 4 comments: