An Excerpt from Handcuffs and Lies

I'm supposed to be doing laundry and packing so we can leave to go on a short vacation tomorrow, but I'm procrastinating. Big time. I'm sure no one is surprised by this. ;) To further my procrastination, I thought I'd post an excerpt of Handcuffs and Lies which comes out Tuesday, August 4th from Resplendence Publishing!


Michael could barely tear his eyes from Tori’s lips. They were glossy and parted and it was all he could do to keep from pushing her against the door and tasting her again.

She opened her mouth, but he shook his head. He needed to get the hell out of her house and away from the press of memories. He might not remember much of the night he'd spent with her, but he remembered enough.

“Don’t. Say. Anything.” He pushed off the door, picked up the backpack and slung it over his shoulder. Grabbing her hand, he pulled her out of the house. “Let’s go.”

What should have been a fifteen minute drive took over an hour. He was exhausted, but he wanted to make sure they hadn’t been followed. The last thing he needed was for Lucky’s guys to find out where he really lived. He’d promised Alex he’d keep Tori safe, and he couldn’t do that if they knew where to find her.

He sighed. He could have paid for a hotel for her. He could have slapped her into protective custody whether she wanted it or not. He could have done a lot of things, but instead, he’d chosen the stupidest one of them all. He’d chosen to bring her home where she could be a constant threat to his common sense and sanity. Good thinking, Mike. Real good thinking.

Pulling into his garage, he shut off the engine and closed the door behind them. He didn’t miss how quickly she scrambled off the bike—away from him. Unbuckling her helmet, she handed it to him and retrieved her knapsack from the saddlebag he’d stowed it in.

He unlocked the door to the kitchen and went inside. What was next was that he was going to lie awake all night with a hard-on that refused to go away while the source of that hard-on pouted in his guest room. He was pretty sure that’s what was happening next.
Posted by Bronwyn Green at 3:43 PM 6 comments:

Lookee What I Got

It's my cover for Handcuffs and Lies - it comes out August 4th from Resplendence Publishing!!!

Sometimes promises to friends are the hardest to keep. Undercover police officer, Michael Tanner promised his dying partner that he’d take care of the man’s little sister. Trouble is, after her brother’s death, Doctor Tori Spinelli wants nothing to do with Michael—or any other cop for that matter.

Tori has always fought against overprotective men and deception. Forced into protective custody with Michael, she’s now faced with both in the same package. Despite their differences, Tori falls in love with him, but how can she trust a man who lies for a living?

And here's the cover! 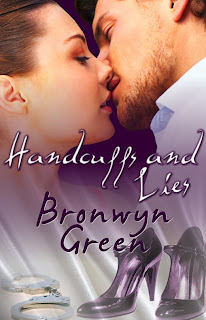 Over at the Writers Evolution blog, we're talking about Misconceptions About the Industry. Come check them out and, if you have any, let us know about yours.
Posted by Bronwyn Green at 8:04 AM No comments: 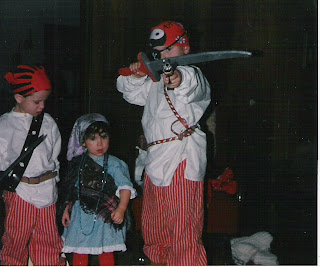 Today is the day that I always forget - 'cause I'm a bad big sister. Usually, I'm on some sort of trip every year on this day and always forget to tell my brother happy birthday and then guiltily remember it several days later. Well, not this year!

Happy 29th Birthday, Martin! I love you!!! (He's the biggest pirate - the other pirates are my brother Andrew and my sister Caitlin) 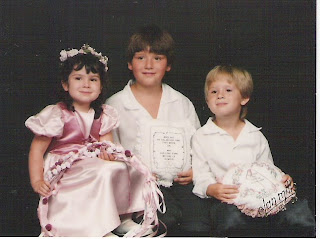 And this is a picture of them from my wedding. Weren't they darling?
Posted by Bronwyn Green at 7:28 AM 4 comments:

Maybe it runs in families...

I spent most of the day yesterday at a family reunion. Us usual, I had a blast because I pretty much adore everyone in my fam. However, yesterday I discovered a new person to adore. It seems that after my uncle's divorce, he got around a bit and had several kids with several different women.

We only just found out that we have these other cousins - one is off fighting in Iraq. I hope to meet him someday soon. One has moved out of state and one came to the reunion yesterday. We had a great time and it turns out that her passions are reading and writing, too! Who knew?!

We talked about our favorite books and our least favorite books and what we were currently working on. We talked about our grandparents who, unfortunately, she never got a chance to meet. I wish we'd found out about her (and the other cousins) sooner - our grandparents would have loved her. I'm thrilled that our family is expanding again and that I got a chance to meet this wonderful woman.
Posted by Bronwyn Green at 6:57 AM 4 comments:

I feel like I've been running constantly since I last posted - here's a quick sum-up, 'cause I've got to get back to work!!!

My sister-in-law's belly dancing tribe was fantastic. I love watching them dance. Before the show, we wandered around a carnival and let the kids ride all the fair rides - they had a blast and I had a near-nervous breakdown watching them on some of those rides. Eek! And despite copious use of sun screen, I still got burned. Even SPF Vampire isn't high enough for me. Afterward, there was a giant belly dancing party at her house.

The next three days were all work all the time - trying to catch up on the day job and pick up the house since it looked a lot like I'd spent all of the previous month writing a book. Funny how that works!

On July 1st, I went with my mom to watch my sister audition for West Michigan Idol. The winner of which gets a guaranteed audition with American Idol. My sister wasn't exactly hoping to win, but she did make a promise several years ago to my kids and my daycare kids that she'd try out for AI. She really didn't want to break that promise to them (they hound her about it ever year) so she went and sang.

She was awesome!!! She sang Son of a Preacher Man and nailed it. However, there was a TON of talented people there and she didn't make it, but she's cool with it since she's got school in the fall and most important to her, she kept her promise.

On Thursday some friends from out of town came in and we've been hanging out with them since then. I'm a sad kid - they have to leave today.

We went to my Dad and Stepmom's on Saturday and had a blast! They live on a lake, so pretty much all 15(!) kids that were there, spent the entire day in the lake, coming out only to eat and watch fireworks. They shoot the fireworks off over the lake and it's really lovely. It was a nice, relaxing day with family and friends...and another sunburn.

More hanging with friends last night (more sunburn) and today. Okay...so it doesn't look like that much craziness now that I've typed it out, but I'm so far behind on work, I guess it just feels that way - lol! Good thing I got that manuscript turned in last weekend!! I've had an awesome time with the out of town friends though and miss them already.
Posted by Bronwyn Green at 7:14 AM 3 comments: