So, yes. I'm still writing the book. I've done almost 5K on it today. However, I'm still not done. To hopefully appease anyone looking for a real blog post, I've got a new Texts from Cait up today. Someday, I'll be done with this book. Right? 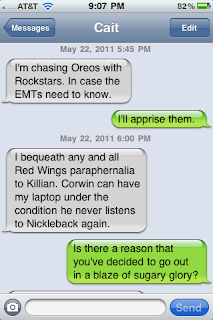 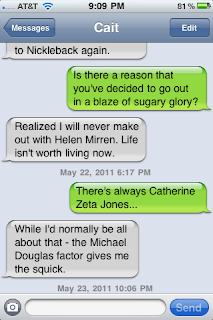 OMG! Lookie What I Got in the Mail Today! 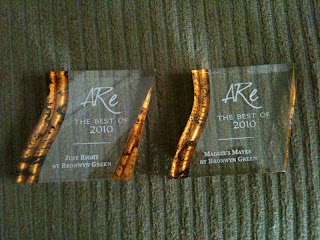 Soooooo, I woke up to this on my phone this morning. Cait clearly had an lovely time. See for yourself... And no, I have absolutely no desire to go with in two weeks. 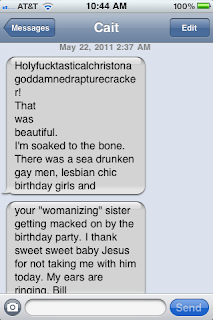 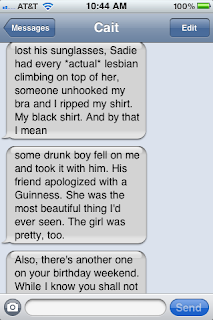 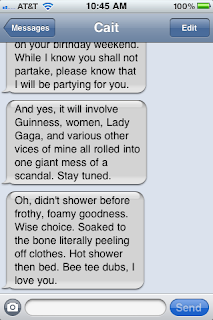 I've been a bad, bad blogger. Again. Stupid deadline. But, I just had this conversation with my sister, Cait, that I thought I'd share because it amused me, and I hope it'll amuse you, too.

(Editor's Note: the Exxon Valdez is a shirt Cait used to have that was a cleavage spill waiting to happen. And if you're wondering why the time stamps on the messages are off, it's because I forgot to take a screen shot of one. All right then, carry on.) 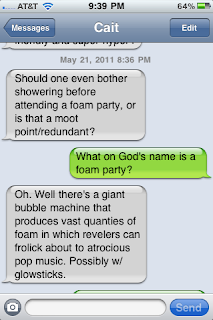 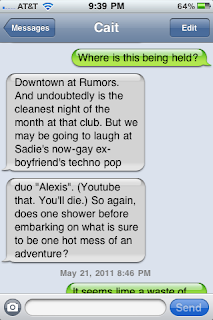 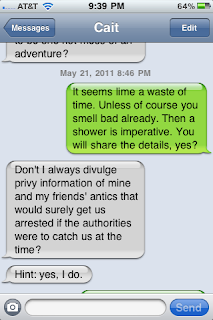 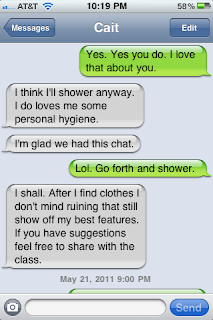 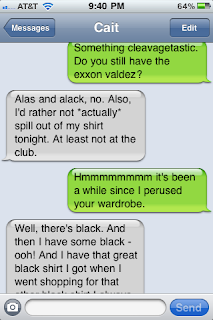 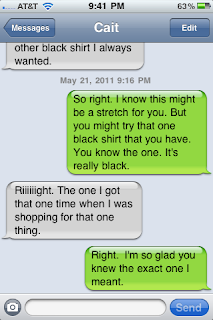 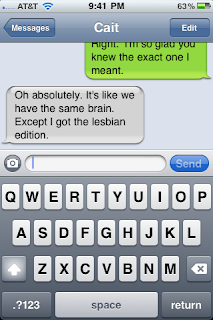 My afternoons are pretty typical: drive to the high school, pick up Killian, Justin and Not-Kevin, hear about their day, laugh my ass off, drop off Not-Kevin, drop off Justin, drive up to the elementary school with Killian and pick up Corwin and go home.

After dropping off Justin a couple weeks ago, Killian's phone rang.

Killian: (after a hushed conversation) Hey lady. Do we have any chloroform?

Me: Because this isn't California circa 1850 and I don't have to anesthetize anyone to perform botched surgery on a gunshot victim that will likely die of sepsis.

Me: No we can't get some. It's illegal and causes chemical burns if you touch it and ohmygod why the hell do you want chloroform anyway?

Killian: We want to kidnap Justin and take him to the Cake concert in Chicago for his birthday.

Me: Admirable. But no. You'll have to figure out a way to do it without dangerous chemicals.

Killian: You're a fun hater.

So after much subterfuge, Killian and Not-Kevin are taking Justin to Chicago tomorrow to see Cake. Justin is convinced they're going to see Thor and crash the ball pit at McDonald's Playland. (I didn't have the heart to tell them that McDonald's hasn't had a ball pit in years due to lost dirty diapers and who knows what else.) I'm a little concerned at the convincing lies Killian and Not-Kevin have spun, yet I'm delighted that they did it out of a desire to make Justin's birthday special.

I made t-shirts for them. They say Pardon me... Do you know the way to Girl Island? (If you're new to the blog, an explanation of Girl Island can be found here and here.)

They loved the shirts and are wearing them to "Thor" and the "Ball Pit" tomorrow. I wish I could be there to see Justin's face when he figures out where he's actually going for his birthday.
Posted by Bronwyn Green at 1:42 PM 11 comments:

Labels: Riding in Cars with Boys

So my most awesome sister Cait picked up the kids from school for me today so I could stay home and work on my fast approaching deadline of doom. Upon their return, I had this conversation with Killian.

Killian: We have a situation.

Me: Guh. What kind of a situation?

Killian: The worst kind of situation.

Killian: You don't understand the gravity of this situation.

Killian: Well, I nothing. He's listening to Nickelback. This is going to ruin him forever. Fuck that. It's going to ruin me. It's killing my brain cells. I blame papa.

Killian: He heard Rockstar on the radio on the way to school and turned it up really loud and forced us to listen to it. Now Corwin's brainwashed into liking Nickelback. You need to stop this right now! It's a crime against humanity! Make it stop!

Labels: Made that one myself

I know it's been a while. It's not that funny stuff hasn't been happening, it's just that so much of it is contextual and really hard to put into a blog post. We haven't seen a lot of Mitchell this year since he's on a slightly different educational track and spends most afternoons on a different campus, but for the last couple weeks I've been bringing him to school in the mornings.

Now, a typical morning without Mitchell involves Killian sleeping between texts from his girlfriend, Corwin sleeping and Justin sleeping. It's usually a quiet ride other than the occasional snore from Corwin and the tapping of Killian's super fast texting skills.

A morning with Mitchell is far different. This is how the first week went.

Monday - Mitchell gets in the car and immediately snuggles up to Justin and lays his head on Justin's shoulder.

Justin: For fuck's sake, Mitchell. Get off me!

Justin: Damn it, Mitchell! What is wrong with you?

Mitchell: (head butting Justin's shoulder and purring like a cat)

Wednesday - same scene except now Mitchell puts his head on Justin's shoulder and wraps his arm around Justin's chest.

Justin: This is unacceptable.

Thursday - same scene except that Justin puts his arm around Mitchell's shoulders.

Justin: I give up. (pats Mitchell's head) Go to sleep, buddy. (Looks at me in the rearview mirror and shrugs) It's just easier to let him have his way.