Cover Reveal: TURN TO ME

Check out this gorgeous new cover for upcoming release, Turn to Me by Harley Easton! The blurb and excerpt are great, too! 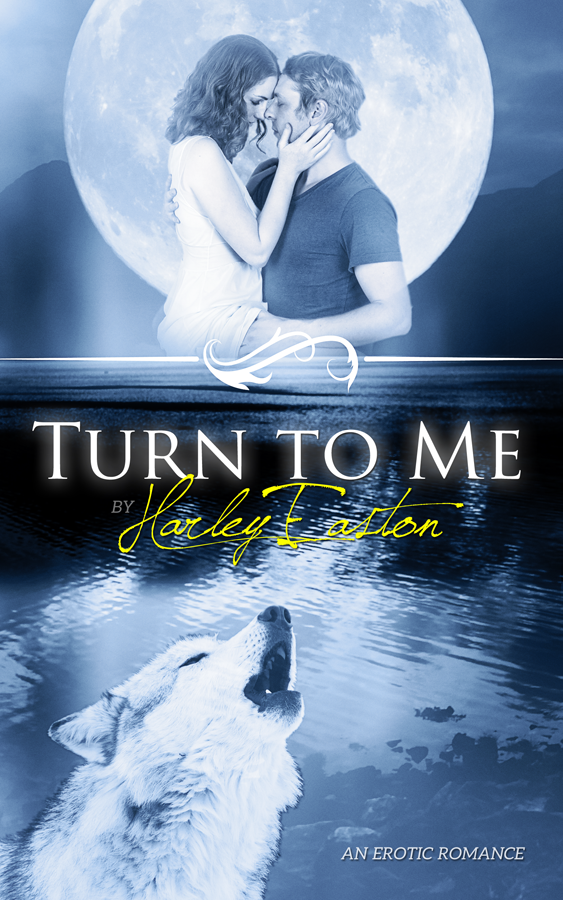 Blurb: Chrissy Lorcan has lived with werewolves her entire life. Detective Landen Sutherlund has only recently discovered their existence. Will a weekend at the lake be enough for her to teach him how to deal with the wolf inside, or will secrets and sexual tension break them?
Excerpt:

"Stay for dinner," he demanded, his hips pressing into hers. The contact made Chrissy breathless and her cheeks flushed. Landen pulled away and became overly careful again. Walking to the oven, he removed the remains of his dinner.

"You'll need to leave right after," he grunted. It stung a little, but Chrissy's feelings were eased at the flustered look on the detective's face. His eyes drifted closed and his forehead creased in worry before he added, "I want to make sure you get home safe."

"It's sweet of you to be so protective, Landen, but I grew up around here," Chrissy said, pulling a corkscrew out of the drawer and opening the wine with a satisfyingly audible pop. "Nothing in these woods is going to harm me."

"You don't know that." His tone was as tight as the line of his lips as he accented the statement by slamming the oven door.

Deciding it was time to stop dancing around the topic, Chrissy poured herself a glass and downed half of it. Then she refilled it and set it down with a clink that made Landen turn. She could tell he wasn't prepared to find her in front of him, pressing a single finger directly into his chest.

"Nothing is going to hurt me, Landen. Nothing. That includes you, so stop treating me like I'm breakable, and actually listen to me for thirty seconds."

His eyes widened at her unexpected forcefulness. "You don't—"

"Yes, actually I do," she cut him off. "It's exactly two hours and twenty-three minutes until sundown and moonrise is maybe ten minutes after. You got some time, so why don't you tell me how long you've had lycanthropy."