This is where I live.

It's been a weird day. Our neighbors came over and asked if they could have our swing set for their kid. I get it - their kid looks longingly at it every day from two yards over and my kids are too old to play on it.

It's a nice one though. It's one of those wooden ones - two swings, a slide, a little clubhouse type thing with a roof and a sandbox area underneath. Matt built it when the boys were about four and two, and it's been very well-loved.

I couldn't really say no when she asked. Seriously? What am I hanging on to it for other than the fact that I don't want to admit my kids are too old for it? So Matt helped the neighbor dude dissemble it and moved it two houses down. I hope the little boy loves it as much as my kids did.

In other less depressing (to me) news. Killian and Corwin and their friend Torin (who used to live where the swing set now lives) have been making a movie for Torin's school project. It's a violent, sword fighting version of Green Eggs and Ham.

Yeah. I don't know either. But apparently, in this version, Sam-I-Am is willing to use all out force to get the other guy to try the eggs and ham.

So, obviously they needed green eggs. So I was explaining to them that they needed to whip the eggs to get them to scramble properly.And all three boys immediately started singing the theme from Indiana Jones.

Labels: teenage boys, There are too many boys in my house, Where I live

Finishing the Book and a Singalong

I'm thrilled to report that I finished the freaking book!

To celebrate (the book being done and me not being a giant stressed out bitch anymore), I took Killian, Not-Kevin. Justin and Johnny-boy D out for shakes after school. On the way to McDonald's (because we're classy...and also on a schedule) we had a singalong.

We sang Dance Magic Dance, 500 Miles (there's nothing like four teenage boys singing at the tops of their lungs in bad Canadian accents and stomping along to The Proclaimers) Safety Dance and by the time we got to the drive through order thingy, we'd moved on to Like a Prayer.

When we pulled up to the window, they were still singing and the clerk cracked up. I introduced them as my backup singers and dancers and at that point, she joined in and sang a few bars with us.

Best drive through experience in possibly ever.

Sadly, I now have to write a blurb.

Maybe we'll go out for shakes when I done...
Posted by Bronwyn Green at 3:53 AM 4 comments:

Trying to finish this damn book...

So, I've been wandering around the house for the last hour trying to figure out what the hell was the matter with my story and it finally dawned on me and I said, "Conflict! I need more conflict."


To which my husband responded, "Okay. We could argue, I guess."


Sometimes he tries too hard to be helpful.
Posted by Bronwyn Green at 12:43 PM 5 comments:

So Cait was bringing me up to the car place to pick up my car which was in the process of being fixed, and she was listening to her Hey Ocean cd. There was a peppy little song playing.

The lyrics are actually:

"You make me want to make up a new dance."

"You make me want to rough up a nudist."


So I went to the Romantic Times convention and it was fab. I love spending time with friends I don't see all that often or only knew from the interwebz, and hell, even friends I see all the time. In short, I love a good conference - even when I'm exhausted and utterly drained by the end.

One of the highlights of RT are the book signings. Both the ebook signing and the print signing are a blast. Meeting readers and visiting with the authors seated nearby is always fun. For instance, at the big book fair on Saturday, I got to sit next to legendary romance author Leigh Greenwood. The man was utterly charming, and I really enjoyed hanging out with him.

And then there was this guy.  Thee Blue Beard. (with two Es)  He was absolutely spectacular, full of questionable innuendos and helpful with book pimpage. What's not to love? 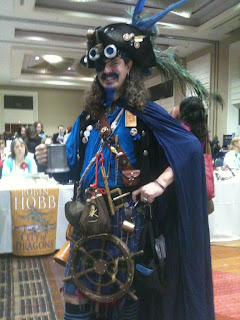 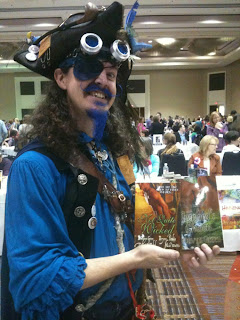 Okay...so I ordered a shirt from a catalog for RT. I went to try it on last night and discovered it. only. had. one. sleeve.

The one I ordered totally had two sleeves.I double checked the catalog to make sure.

So luckily, there's a store nearby where I can return it. However, when I went in, the clerk said, "Well, we only take back catalog items that are defective."

I laughed because I thought she was joking.

She just stared at me like I was confusing her.

I pointed out the one sleeve-two arms issue and after some muttering she accepted it for return. But seriously...how is one sleeve not defective?

Have I ever mentioned how much I hate shopping? Because I so, so do.
Posted by Bronwyn Green at 3:45 PM 5 comments:

My Screw Up. Your Benefit.

I'm sure no one here will be surprised to hear that I screwed up.

When I panicked and dragged myself out of bed last night to draw a winner for the M.H. Mead contest, I thought it was the 4th. You know, the day I was supposed to draw the winner.

Evidently, it was the 3rd.

They're called calendars. I should really take some time and figure out how they work.

However, Margaret is AWESOME. And she's volunteered to send ebooks to everyone that entered!

Yep, you read that right.

And I have to say, I love this book. So much. Near-future sci-fi at its creepiest best!

So a huge thank you to Margaret and Harry for being freaking amazing.

And for those who benefited from my idiocy...you're welcome.
Posted by Bronwyn Green at 4:10 PM 1 comment:

Labels: Bron is a dumbass, M.H. Mead, The Caline Conspiracy

We Have a New Winner (and a whiner)

Huge apologies to everyone.

I just went to bed and had the horrible thought that I'd forgotten to draw a winner for the awesome, new M.H. Mead book, The Caline Conspiracy.

I blame the migraine that ate my night and is pulsing angrily in my head.

So without any ado, and minimal whining, we have a winner!

Margaret will be contacting you shortly. :)