Losing the last of my sanity...

So, I'm desperately packing to leave on my writers retreat vacation tomorrow and and also trying to desperately sort out the last of Killian's financial aid stuff for college and desperately trying to make sure everyone has everything they need before I leave.

You may have noticed a theme here...

Anyway, I was talking to Killian while he was finishing up his thank you notes and I mentioned something about packing up my computer so I could work up north.

Killian: You're going on vacation.

Killian: And you're going to be writing?

Killian: That's not a vacation! That's just working in a different location.

Yep. That's the one I have.

Labels: Getting ready for vacation, the one I have

New Misread of the Day

Yep...there's another misread of the day. I was looking at a friend's Facebook status update.


What it really said: Safe house or Man on a Ledge?


What I thought it said: Safe Meth House on a Ledge.


Yeah, I'm a little worried about my brain, too.
Posted by Bronwyn Green at 6:57 AM 2 comments:

I'm far too introverted for all this bullshit.

A week ago tonight was Killian's high school graduation. Honestly, most of the speakers were pretty lame, but there was of course the super bright spots of seeing Killian, Justin and Not-Kevin graduate. Not-Kevin had glued the back part of his Darth Vader helmet to his graduation cap, he wore the voice changer thing on his chest and carried his lightsaber. He almost got through with the modified hat. The teachers loved it, but the principal thought it would be distracting. Really? Like the girls with their caps draped in glowing Christmas tree lights weren't? Whatevs. And then security took away his lightsaber as the kids processed in. Fun haters. And yeah, I cried. But that shouldn't surprise anyone. Also...graduating class of 590 kids. No. That isn't a typo.

And the craziest thing happened! Before the ceremony started, a woman in front of me turned around and called my name. I squinted at her, trying to place her. Turns out that she's someone I graduated from high school with and we literally hadn't seen each other since the day we graduated. Crazily, we both had oldest sons graduating at a completely different school than we graduated from. It was bizarre - but cool.

Last Thursday was Corwin's graduation. Ohhhhhh, there were tears. Part of it is that as a parent, I'm not ready to have my baby in high school. Part of it, is leaving behind his friends who aren't going to the same high school and part of it is leaving behind teachers we've grown to love. Corwin has been at this school since kindergarten and Killian started when he was in second grade, so I've been going to this school every day for eleven years. I can't even imagine not doing that any more. Only 67 kids in this graduating class, btw.

I got great pictures of Corwin and his friends. And in other cool news, the five main departments (English, Science, History, Spanish and Math) give out awards to one kid per department not only for their grades, but their enthusiasm for the subject. I'm super delighted to say that Corwin for the award for History! Apparently, his mad cannon making skills and devotion to battle strategy has paid off.

Last Friday was his last day. I went to the last all school assembly and cried some more. (Yes...there's a theme here. It's called Bron is a giant emotional wuss.) Then I went out to breakfast with another mom who I've known since Killian was in fourth grade. Then we went back for the eighth grade walk. This is when the entire school - kids, teachers, parents - lines the hallways and cheers all the eighth graders as they walk through one last time. (Yep, we both cried some more.)

About twenty of the kids have been there since kindergarten. The school got them all this gorgeous brass compass set in a wood and glass box with their name engraved on it along with a quote by Thoreau that says, "Go confidently in the direction of your dreams. Live the life you have imagined." I have a feeling Corwin, being the ship lover that he is, likes it more than most of the other kids. But, it's cool and very thoughtful of them to single out the kids that way. 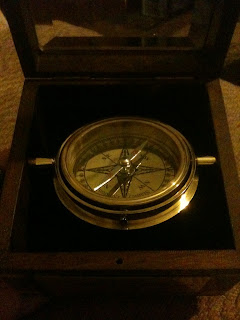 After school, I ran around like a madwoman, meeting another friend for lunch, then trying to track down Corwin, he was at a friend's house, then shopping for all the freaking graduation party food, (more horrible food math!)  then picking up Corwin and his friends and dropping them all off at their  homes, then delivering the food to my mom's house where the party was going to take place because she's awesome. I left my house at 7am and didn't get home til almost 9pm. (I know, Margaret - that's no excuse for not getting your my story update on time. I promise, I'll be better this week.)

Saturday was more craziness - cleaning and prepping for the party. Have I mentioned that I hate throwing parties? Because I do. A lot. I don't mind going to them, but I'm the kind of hostess that freaks out if not everyone looks like they're having the BEST. TIME. EVER. I suppose I'm lucky that anyone comes to these things doesn't hate me after I've hovered asking if they've gotten enough to eat, if they want more water, if they want Valium. Oh, wait. That was me asking for that.

But Sunday was the party. I made signs to put on either side of my mom's driveway. In a fit of directional disabledness, I managed to point the arrows across the street to the neighbor's year because I'm just that clever. Luckily, most people figured it out because I'd left my Sharpie at home. It was hot and gross and sweaty and I ended up with a heat migraine and sunburn but it was worth it and it's over!!!! (People assure me they had fun. I'm choosing to believe them. It'll lessen my continuing party anxiety.) I almost cried with relief when Brynn and her husband showed up a second time to help cleanup. I have the best friends and sister and mom, dad and stepmom in the world. And thanks to everyone's help, this party didn't suck. And people definitely busted their butts helping.

Today, Killian and I spent all day at the university he'll be attending in the fall - my Alma Mater. He got all his classes picked out, I had a mini-nervous breakdown (introverts need breaks between dealing with large groups of people. Between two graduation ceremonies, the eighth grade walk and the party, I was totally peopled out.) And today was all people all day long. However, I did meet an awesome mom at lunchtime today where we discussed books, and 50 Shades of Grey, in particular. I feel you all know me well enough to know that I didn't have anything nice to say. About the book, anyway. This mom was super awesome!
Posted by Bronwyn Green at 7:32 PM 7 comments:

Labels: I need a vacation, parties are not my friends, too many people

Of Boys, Battles and Black Holes

Last Friday, I took Killian, Justin and Not-Kevin out for our annual end of the year breakfast at iHop. I asked the hostess to seat us away from everyone else, explaining that it was just better that way. But she apparently didn't get the clue, and put us smack in the middle of the restaurant.

While we were waiting for the food, they came up with an idea for a screenplay involving super polite Canadian zombies who actually ask before biting. And there was a Mountie in there too who was too polite to say no when the zombies asked, so...

My favorite part was when Not-Kevin did dialogue illustrating the differences between Yooper, Canadian and Minnesotan accents. It was brilliant.

That same day, Corwin had a civil war reenactment at school involving marshmallows and a water balloon cannon that he'd made with his friends Gray and Andrew using a length of PVC pipe and a little tykes shopping cart. I wish I'd thought to get a picture of it, because it was pretty brilliant.

Corwin was, of course, bitter because "no one was following the rules of war." I told him I didn't think there were rules to war. I got the look and a scathing, "they could at least try to have some honor is all I'm saying."

Saturday was the first of the graduation parties. I was totally channeling my mother, because in addition to the check for Justin, I was also knitting him a pair of slippers. I'd finished one before I'd gotten there, but I still had about four rows plus decreasing for the toe, so I decided to just finish them while I was there. Because I am my mother's daughter, I'd brought my yarn needle and scissors so I could finish those bad boys up. Justin was thrilled because his feet are always cold.

While we were sitting outside visiting (and knitting) it started to rain, so I hauled my purse and knitting bag inside. It cleared up, so we went back out. Rinse, repeat. Finally, it was time to go and one of the other guests couldn't find her car keys anywhere. We did the obligatory glancing around, but they were nowhere to be found. I had to get Not-Kevin home, so we took off. We got about twenty miles away when the phone rang. It was Justin's mom asking me to look in my purse for the keys. I said that we'd look, but I was sure they weren't there.

Her keys were totally in my purse.

Had to drive alllllll the way back and shamefacedly drop them off. I still have no clue how they got in there. Killian has a theory, though. His theory is that my purse is a black hole and while we were outside, my purse was actually sucking the moisture from the air causing it to rain which is why it stopped every time we went into the house. And at some point, it sucked the keys into gaping maw, too.

Yesterday was quiet. We were supposed to go out to eat and celebrate our anniversary (23 years! O.O) and my birthday, but the boys and Matt both caught my damn cold...so celebrating will have to wait. But I did have a fantastic post birthday lunch today with Brynn Paulin, Mia Watts and Jennifer Armintrout!
Posted by Bronwyn Green at 3:27 PM 2 comments:

Labels: boys, the ones I have

An inordinate amount of my posts are entitled "Catching Up". This is no exception.

So, I've been crazy sick all week with my annual summer head/chest/throat cold. It sucks. Even more so since I have less time than usual to be sick. But the plague waits for no woman. Particularly not me.

Yeah. I am feeling a little overwhelmed.