Merlin Club: Lancelot and Guinevere or The One Where Insta-Love and Martyrdom Are a Thing

This episode opens with Arthur helping Morgana onto her horse in preparation to make a pilgrimage to her father’s grave. We also see Gwen getting herself on her horse (servants don’t warrant assistance) while exchanging meaningful glances with Arthur. 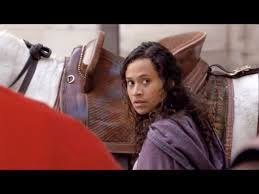 He tells them to return before dusk and Morgana and Gwen ride off with several knights and are later attacked on the road. All the knights are killed and the women are taken prisoner. 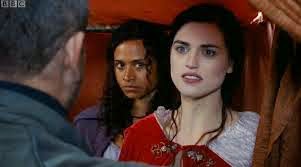 When Morgana and Gwen don’t return, Arthur sends men out to look for them. Meanwhile, Morgana demands to be allowed to bathe. The head ruffian takes Morgana and Gwen to a creek where Morgana strips down to her shift. 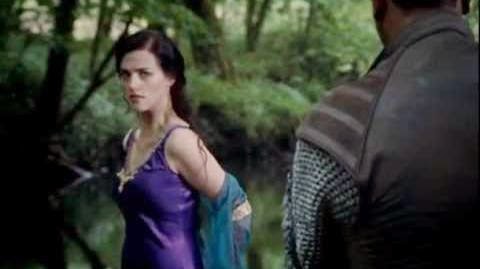 While the men guarding her are distracted, Gwen grabs the head guy’s sword and tosses it to Morgana who strikes both men before she and Gwen flee into the woods. Gwen falls and twists her ankle and tells Morgana to go on without her and get help. Morgana doesn’t want to leave Gwen, but realizes help is the best course of action. The kidnappers catch Gwen and decide to pass her off as the Lady Morgana. She’s against impersonating her mistress, but it’s between that and death so she puts on Morgana’s dress. 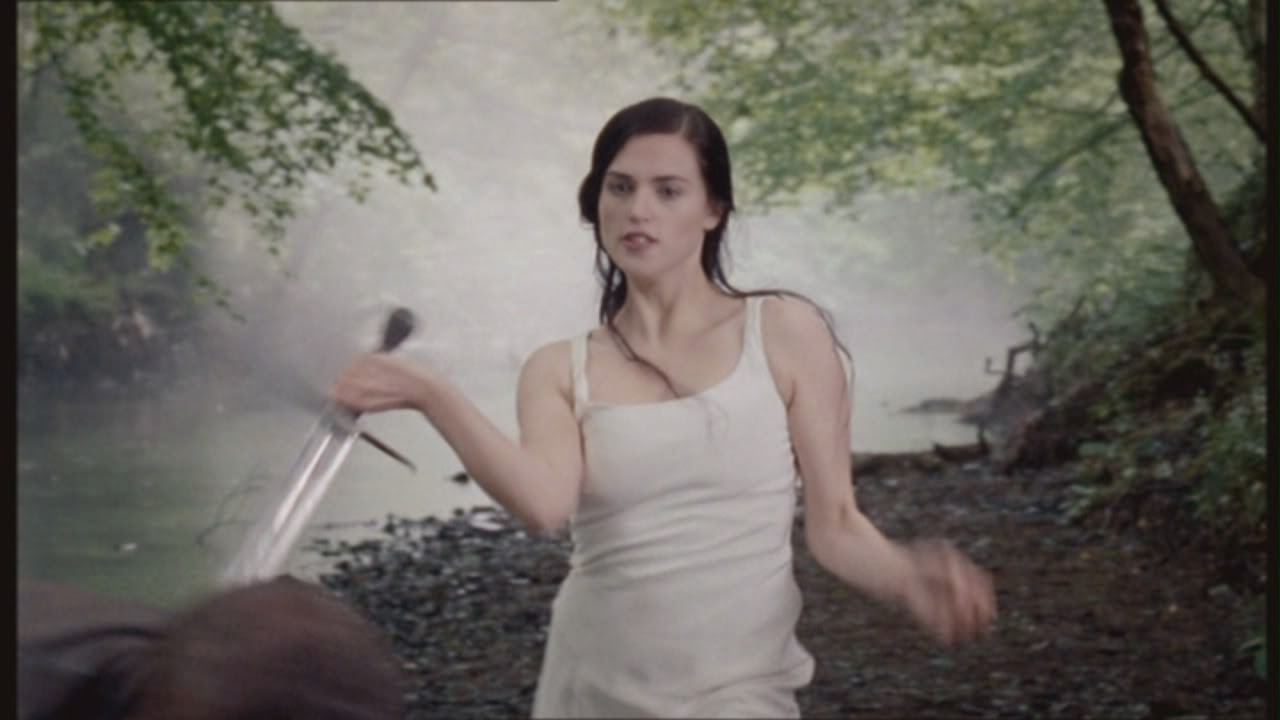 Meanwhile, Arthur and Merlin are also searching for the women and Arthur finds Morgana wandering through the forest with cuts and bruises on her face. Arthur looks so stricken when he realizes Gwen isn’t with them. Uther is overjoyed that Arthur has found Morgana, but he has absolutely no interest in going after Gwen. And Arthur backs him up. *gasp* Morgana is understandably enraged and yells at both Uther and Arthur.

Meanwhile, Gwen’s been delivered to the outlaw Hengist who’s demanded a ransom for the Lady Morgana and he tosses her in a prison cell. Back at Camelot, Morgana storms into Arthur’s room to berate him some more about not caring about Gwen, but Arthur points out that he’s clearly readying his things to go after Gwen. Merlin and Arthur sneak out of Camelot that night. 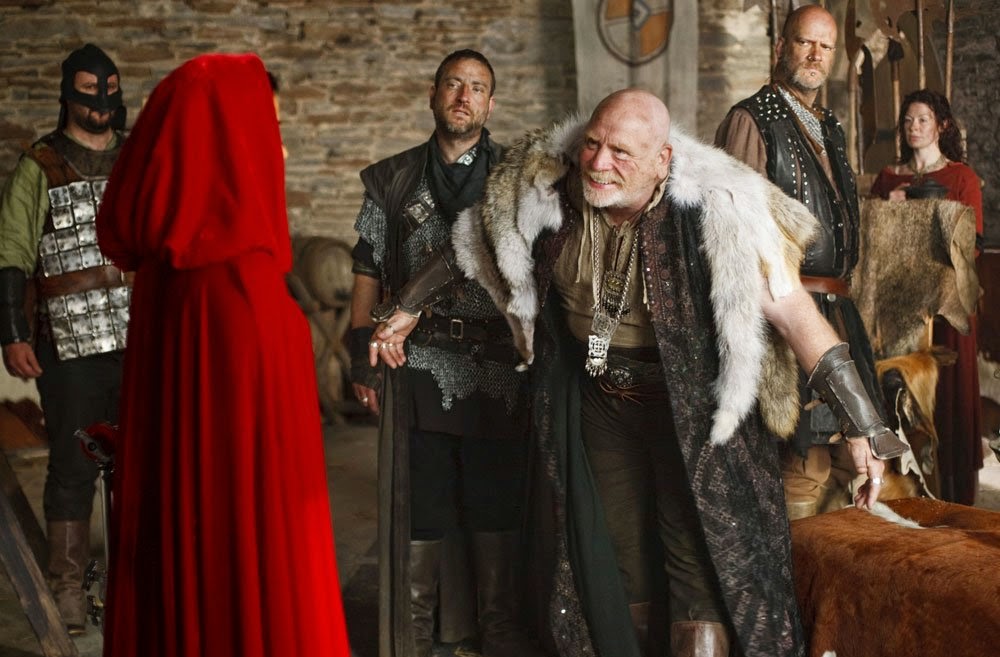 At Hengist’s, they’re having a big old raucous feast and Hengist decides that the Lady Morgana needs some entertainment, so there’s a medieval cage match. The champion is a big, bald dude and the challenger is none other than Lancelot. Lancelot wins (of course) and offers the other man mercy (of course) and recognizes Gwen. He also totally keeps his cool when she’s introduced as Morgana (of course). Hengist sets a Rodent Of Unusual Size wildren loose on the loser, and it messily feasts on the guy’s flesh and Gwen is returned to her cell.

The next morning, Arthur and Merlin are still riding through the forest looking for Gwen when Merlin, having fallen asleep, falls off his horse. There’s some banter and the quest continues. Back at Hengist’s place, Lancelot speaks to Gwen through a grate in her cell. They do a little catching up, and he vows to save her (of course) and they renew their romantic interest in one another.
Merlin and Arthur are still looking for Gwen and Merlin helpfully points out how much Arthur must care about Gwen to be behaving as he has been. Arthur ignores him. Hengist threatens Gwen telling her if Uther doesn’t pay by morning, she’s dead. 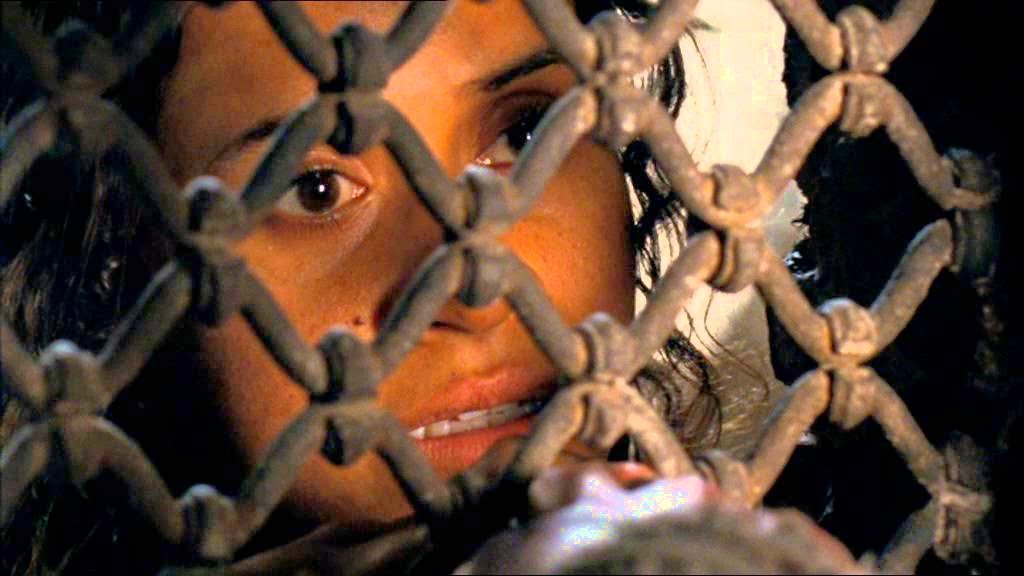 Arthur figures out where Gwen is being held and decides to get there more quickly, they have to traverse the Tunnels of Andor, which are home to the ROUSes wilder – the horrible, giant flesh eating rodents. In order to mask their delicious human scented flesh, they rub foul smelling gaia berries. They have a near miss in the tunnels where Merlin is coated with snot from the ROUS wildren. But the gaia berries work and they’re able to safely pass through the tunnels. 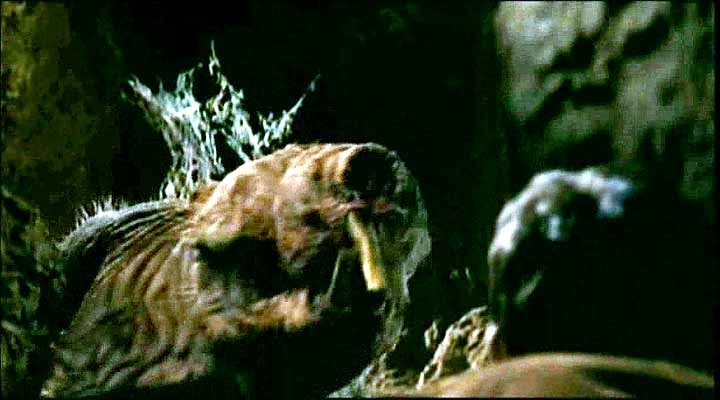 Lancelot visits Gwen and again vows that he’ll get her out of there and tells her how he doesn’t really have anything to live for anyway. (Woe is me martyr syndrome has claimed another victim.) But Gwen convinces him that he does have something to live for – her.

Meanwhile, Merlin through the sheer force of his badgering, convinces Arthur to come clean about his feelings for Gwen, so they have a bit of a heart to heart. Arthur is convinced it’s pointless because his father will never understand and Merlin says that Arthur can change things when he’s king. Arthur says he can’t expect Gwen to wait for him, yet, in their big romantic episode earlier this season, she pretty much says she’ll do just that.

Hengist figures out that Gwen is not Morgana because she has the hands of a serving girl. Gwen gets shoved back in her cell where she weeps. Meanwhile, Lancelot is busy drugging the guards outside her cell. Hengist punishes the head kidnapper for bringing him Morgana’s maid instead of Morgana by feeding him to the ROUS wildren. 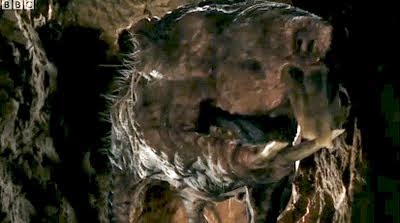 Lancelot breaks Gwen out once the guards are unconscious. He tries to send her out of the castle through a tunnel and she refuses to leave without him, afraid that he’s going to die. But he convinces her to go and live for him or else his entire life will have been for nothing…or some shit. Then she kisses him and tells him her feelings for him will never fade. Seriously, Gwen? Because a couple episodes ago, you were in love with Arthur. Juuuuuuuuuuuussst pointing that out there.

So Lancelot goes back to sacrifice himself against the bad guys who eventually overwhelm him and he ends up tied up in the cage match cage. He’s cool with that, because he thinks Gwen’s gotten away. But then Hengist crushes his hopes and dreams by throwing Gwen in the cell with him. They hold hands knowing that they’re going to die, but at least they’re dying together. 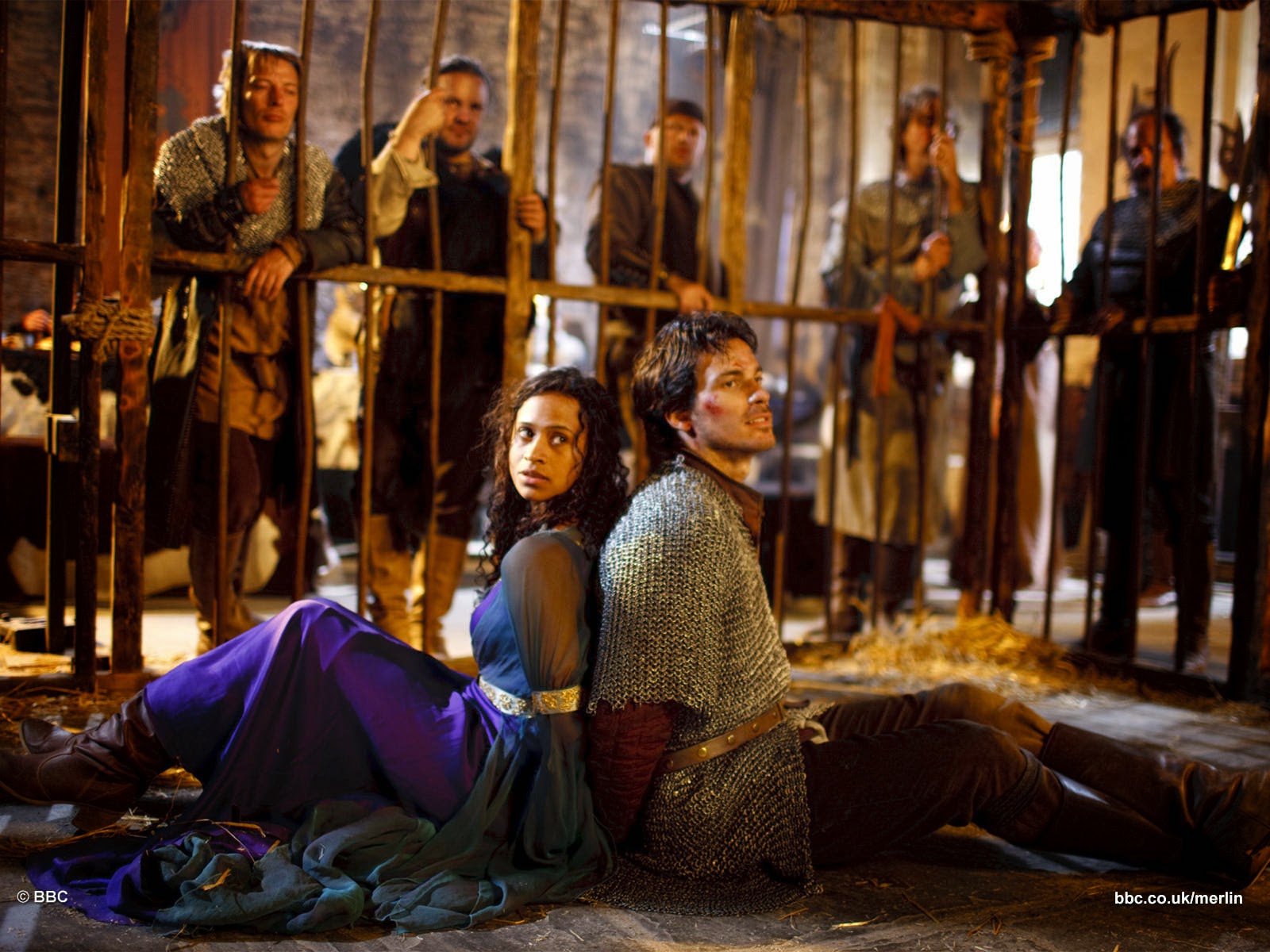 Meanwhile Arthur and Merlin climb up the side of the tower of the bad guy hideout and enter through a window. They attack a couple guards, steal their clothes and head down to the cage match area where Hengist has opened the gate to let in a ROUS wildren. Arthur jumps into action, steals an extra sword and leaps into the cage to protect Gwen and Lancelot. He frees them from their ropes and tosses the other sword to Lancelot. Arthur and Lancelot fight off the ROUS wildren while Hengist grabs his crossbow and plans to put an end to things. Merlin spots this and uses his magic to bring down the giant iron chandelier thing. It narrowly misses Hengist and hits some other hapless dude, but he does lose his shot.

Hengist pulls out his sword and enters the cage. Merlin hops into the cage and the four of them head into the tunnel where the ROUS wildren entered from leaving Hengist with the creature. Arthur leads Gwen ahead. Lancelot stays behind with Merlin who uses magic to close the gate, trapping Hengist who’s about to be the ROUS’s wildren’s supper. Merlin and Lancelot catch up to Arthur and Gwen and Gwen and Lancelot hold hands. Arthur notices it immediately and looks incredibly hurt. And Gwen just starts shooting him dirty looks. What the hell, Gwen!? 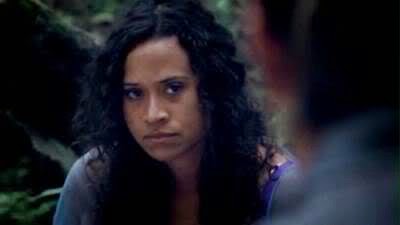 After they’ve been presumably traveling for a while, the four of them are seated around a fire. Lancelot and Gwen on one side and Arthur and Merlin on the other. Gwen’s looking super pissy – WTF, Gwen. Arthur and Merlin just risked their lives to save your ass. How about a thank you? Arthur’s still hurt and being a dick because of it. He says he only came after Gwen because Morgana begged him which of course makes Gwen pissier.  And boy howdy, is it awkward around the fire. 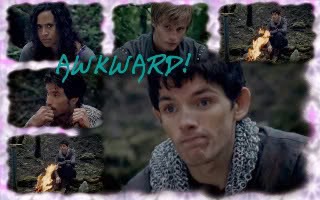 Gwen and Arthur both pissily decide to get some sleep while Lancelot takes watch. Merlin goes to talk to Lancelot and being not a complete idiot has figured out that Arthur has feelings for Gwen. Merlin asks him if he has feelings for Gwen and his response is that his feelings don’t matter. Look, I get that Lancelot is supposed to be the shiniest and most perfect of all the knights, but come the fuck on. This martyr thing is *not* working. But despite my protests, Lancelot continues on and decides to leave while Gwen is sleeping, leaving Merlin with a message for her. When Gwen wakes to find him gone, she’s predictably crushed. I really think that if they’d stopped to have a fucking conversation, she would have chosen Lancelot (despite the fact that they didn’t know each other all that well).

They ride back to Camelot in silence and Morgana is thrilled to have Gwen back. And while they’re hugging Gwen looks back at Arthur whose heart is just broken. The expression on his face pains me. Greatly.

Later, Merlin tells Arthur to look on the bright side, because Arthur still has him.Arthur is understandably unimpressed.


1.       If I’d written this episode...oh, so many things. But I would have changed the timeline so Gwen and Lancelot actually had time to fall in love - not this instalove thing. I also would have had her agonizing about her choice a little more rather than just acting pissy that Arthur dare intrude on her love for Lancelot.

2.    The thing I loved/hated most about this episode. Loved:Merlin cheerfully offering to talk with Arthur about his feelings.  Hated Gwen's reactions to Arthur and and also the instaloveness.
.
3.    Something you’ve never noticed about this episode before. The way Gwen and Morgana just sat on their damn horses and stared dumbfounded while they were being attacked. Seriously, they helped plan the defense of a village and both of them fought marauders on their own and they can't grab a weapon or at least ride the hell away from there!?

4.    Favorite Costume. This week, it's the skeezy kidnapper's costume.

5.    Here is Proof of some random head canon I’ve created. Sorry, it's another week of no real canon here – none that I’ve created, anyway.
6.    What Merthur moment did Jess have the naughtiest thoughts about? The part where Merlin points out that Arthur still has him. In Jess' mind, this episode ended very differently - with Arthur receiving lots of "comfort" from Merlin.
7.   What made Jen lose her shit (in a good or bad way) in a bad way? I'm gonna go with Uther not giving a shit about about Gwen - also from a ruler's point of view, you're just going to let marauders raid your land and attack your people with no retribution? Way to be a king, Uther.
Jess' take on the episode is here, and Jen's is here.

Good point on the girls not fighting back or running like hell. That doesn't fit their characters at all.

And I love the Merlin-Arthur banter. And Merlin totally made Arthur feel better at the end... TOTALLY