Why Siri is a better mom than me...

So...Killian has been saving his money, and when his phone contract came up for renewal, he decided to get the new iPhone 4S. If you're unfamiliar with this little gem, the 4S has a virtual assistant. You can speak to it and it'll do speech to text, it'll call people and it'll answer questions. For instance, this morning he asked Siri how many were left 'til Christmas. My blood ran cold when she announced "62 days" in her smug sounding computerized voice.

However, Siri's been a ton of fun and really useful. I particularly love that whoever programed her has a great sense of humor. The other day, Cait asked Killian to have Siri look up something and she came back with some wonky suggestions. 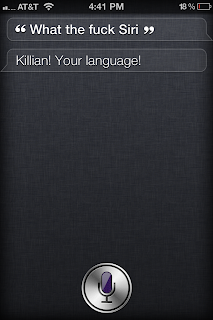 Then he rephrased the question and got something even wonkier. 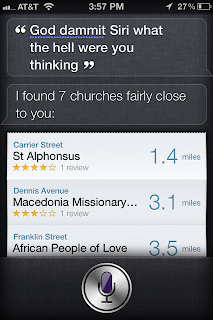 Cait: HA! She totally called him on his language. Siri's a better mom than you!
Posted by Bronwyn Green at 7:20 AM

Labels: irrational Skynet fears, Siri, the ones I have

Hmm. My veri word is lordist...

The screenshots didn't come through. I tried both IE and Chrome. I don't know if it's browser fail or what. Now I'm sad because I wanted to see the conversation!

I tried reloading the pics - check it now. :)

Siri is just new to the household. Give her time. :)

ROFL! Love this. :) I've been debating about it...when the price comes down maybe I'll get a 4S, for now I'm sticking with my trustworthy (and throw/drop/splash-proof) Blackberry.

ROFL! That is great.