Hey! Do you like heroes with physical and emotional scars? 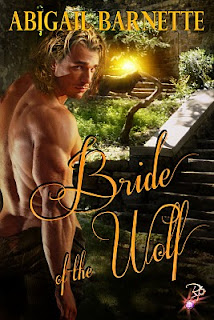 What a coincidence - me too! You're gonna wanna hear about this.

Abigail Barnette a.k.a Jennifer Armintrout has a new book out today and holy cow is it AWESOME. I got to read an advanced copy, cause, well, I'm super lucky. Let me just tell you, if you love shifters - this is the book for you. If you love historicals - this is also the book for you! There are very few books I have time to re-read anymore. This will definitely be one of them.

Even cooler, you have a chance to win! Abigail/Jen is giving away an e-copy of her new book! All you need to do to enter is leave a comment along with your email address. Easy! Contest ends at 8pm EST on Sunday, the 9th.

Commanded to marry the son of Lord Canis, a powerful ally of her father and King Edward, Aurelia knows she is about to venture into a den of wolves. For the men who live at Blackens Gate are no ordinary men, able to change at will into enormous, bloodthirsty beasts…and as a mere human, Aurelia is a reviled outsider.

When the wolves escorting his brother’s bride to Blackens Gate turn on her, Sir Raf Canis finds himself in the unlikely position of rescuer. After losing his leg—and his place in the pack—Raf refuses to bring himself further shame by failing to deliver the lovely Aureilia. But the innocent maiden proves to be a temptation even he cannot resist.

Within the dark, dangerous forest, a love begins that neither can deny. To protect Aurelia, Raf must betray everything he has come to believe about his life among wolves, and risk death to save the only woman ever to touch his wounded soul.

And here's an excerpt:

It took Aurelia only seconds to assess that there was something dangerous in the way Jeoffrey approached her. The set of his mouth as he smiled, perhaps, or the slow way he came forward. She stayed very still as he came close to the back of the cart, a hand reaching to the knife at his belt.

“They’ve gone deeper to look for game,” he said in a reassuring tone. His hand fell on her shoulder.

His expression darkened. “Don’t? You aren’t the lady of the castle yet, apple. And things work a little differently there, don’t they then?”

“I wouldn’t know,” Aurelia admitted, breathing deep. “But if he is a man, my husband would not like you putting your hands on his property.”

His eyes. Jeoffrey’s eyes flashed warning orange, and Aurelia shook her head, backing slowly away. Of course, she’d known what they were. Her father had spoken of the wolf-men with disgust, but grudging respect for their prowess in battle. Yet something of a blindness, unintentional, perhaps, had come over her when she’d contemplated this journey. While her denial had made her feel safe, she now realized the folly of it. She was alone, in the forest, with wolves.

Jeoffrey’s body, made heavier by the mail he wore, pinned her to the hard ground in half a heartbeat. She gasped for air, then gave up and clawed at him, not breathing but making a hoarse, gulping sound as she pushed and slapped to no avail. His knee pressed between her legs, pinning her skirt to the ground, and as she flailed, she heard the fabric tear. One of the woolen mitts she wore on her hands slipped free, and she sank her fingernails into the skin of his cheek, raking down as hard as she could.

With a roar of pain, he reared back, but only for a moment. As she tried to drag herself backward, he struck her across the face with one metal-plated gauntlet, and blood exploded from her lips, matching the three bright red stripes she’d left on his face. But a second was all she had needed to gain her breath, and with it, her voice. She screamed, shrill terror ringing off every tree in the forest.

The rest of the party returned within seconds, even Raf, crippled as he was. It was he who lifted Jeoffrey from her, flinging him with impossible strength into the side of the cart. The knight crumpled with a sigh of collapsing mail, blood spattered across his tabard.

“Get up!” Raf shouted, dragging her to her feet ungently, by one arm. Aurelia’s head reeled, and she struggled to understand this rough treatment. Did he not see her struggle? She thought to plead with him to see reason, that she had not betrayed his brother, her betrothed, but then she saw the reason for the urgency in his tone. On the far side of the narrow road, Margaret Lackey and Sir Clement stood, brandishing spear and sword, their eyes glowing orange.

“You would harm one of your sworn brothers to protect this mewling cat?” Margaret spat in the dirt. “Your father was right to set you aside. You’re nothing but a coward!”

“She belongs to my brother!” Raf pushed Aurelia farther behind him. “He has bested you both in combat time after time, and you’ve never earned the right to his property.”

“She isn’t a proper woman,” Clement explained patiently, as though Raf were a child to be soothed. “She is a lower being.”

“She belongs to my brother,” Raf repeated. “If either of you wish to challenge him for her, you may do so at the wedding feast. But I am charged with her safety.”

“We could challenge you in your brother’s stead,” Margaret threatened. Aurelia peered past Raf, then regretted it. The fierce woman wore a cruel grin. “Clement, Jeoffrey and I. We could easily cut you down, crippled pup, and all three of us share her.”

Suddenly, the world was upside down, and moving fast. Hanging as limp as a sack over Raf’s shoulder, Aurelia watched as, in a flurry of movement almost too fast to see, Margaret Lackey and Sir Clement shed their clothing and crouched, lean and terrifying, their naked skin rippling in waves of black. Two huge wolves sprang at her, jaws snapping. Another breath and they would be upon her, and Sir Raf, one-legged, limping Sir Raf, could not protect her.

He jostled her on his shoulder, and wind whipped her face as a thick branch snapped backward, knocking back one of the wolves, Clement, if she’d kept things right when the world turned upside down. The wolf Margaret jumped, and Raf whirled, Aurelia flying up and colliding with his back as the wolf yelped. Then, pulling Aurelia over his shoulder to cradle against his broad chest, Sir Raf dropped to the ground and they were sliding, in a cloud of dust and dead leaves, down a steep slope, the end of which disappeared into nothing. Raf did nothing to slow their descent, but held her to his chest tighter with one arm as they flew over the brink. With an arm above his head, he caught a thin ledge of stone from the face of the cliff.

Aurelia did not wish to look down. Far below, the river roiled, white frothing against the dark depths.

“Hold on to me!” Raf shouted over the rushing of the river.

She flung her arms around his neck, even as she begged him not to do what she was certain would come. That they had outrun the wolves was unbelievable; that they could survive the tossing waters was too much to ask.

She squeezed her eyes shut, but she could not ignore the plummeting feeling. It seemed forever before they touched the water’s surface, and then, as the frigid depths enveloped them, not enough time at all. She tried to keep hold of Raf’s neck, then just his cloak, her fingers fumbling on the wet edges of the fur, but the water drove them apart, tore her away in a rapid current that she struggled to climb above. This river ran past her home as but a trickling stream that she had sailed wooden boats on as a child. Now, it offered her no friendly quarter, sweeping her down the banks, farther and farther away from where Raf surfaced, looking about frantically. She gasped for air before the currents pulled down again. Her last glimpse of the world above the water was of the huge, black wolf standing at the cliff’s edge.
Posted by Bronwyn Green at 3:43 AM

YES! I'm going to win the HELL out of this book!

I love a story with a wounded hero, especially if it's about shifters. I love the cover. Thanks for the chance.

I so want this book. I love the tortured hero, and this an awesome great excerpt and going on my gotta have asap list right now.
thanks for the giveaway!

Certainly sounds like they have to work for their HEA. Count me in.
linze_e@hotmail.com

Ooooh, sounds like an excellent read! (shoulders past everyone, or tries to anyway!) Count me in:)

Great cover and the teaser is brilliant! I can't wait to read it.

Wow, this sounds exciting. I would love to have this book. Here is my email address: tking@bigpond.net.au

In the immortal words of the seagulls from Finding Nemo.....

I love her books and this one sounds great!

I love a wounded hero, add in shifters and this just became a must read for me! The teaser is great!

Awesome excerpt! One of my favorite is shifter books, would love to read it :)

Pick me, please! I loved Giant, and I know I'm going to love this one, too.