Merlin Club: A Remedy to Cure All Ills or The One Where People in Camelot Are Super Passive-Aggressive

It's time for Merlin Club - that time of week is when Jess Jarman, Jenny Trout and I recap the latest episode of the BBC's Merlin.

The episode opens with a mysterious person who’s clearly being naughty and using magic. There’s also a box full of bugs. A box full of magical bugs. This seems like a terrible idea. But the mysterious figure is undaunted and enchants one of the little bastards then puts it in a lily in a floral arrangement that then gets delivered to Morgana. 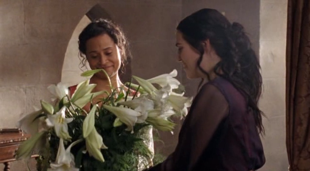 That night, the mysterious dude (whose face is all scarred up a bad burn) stands in the courtyard of Camelot looking up at Morgana’s room. And that horrid little magical bug crawls out of the lily, across Morgana’s face and into her ear because this is the episode that’s gonna give me bad dreams for decades to come. 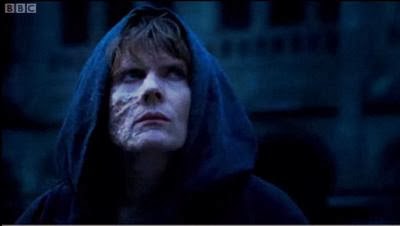 The next scene opens two days later with Uther sitting on Morgana’s bed chastising Gaius for not having figured out what’s wrong with Morgana. Gaius tells him he thinks it’s an inflammation of the brain. When he leaves Morgana’s room, he tells Merlin that Morgana is all but dead. Merlin offers to use magic, but Gaius shuts him right down.

Cut to Arthur leaving the castle and asking the mysterious dude what his business is. Okay, so in broad daylight someone asks, but no one can be bothered while he’s skulking around at night? Camelot, you need to train your guards better or something. Mysterious dude introduces himself as Edwin and begs an audience with the king. Arthur tells him to shove off; they’ve already got a court physician. And Edwin asks after Lady Morgana’s illness saying he may be able to help.

Okay look, Arthur…Morgana is ill with a mysterious disease that’s not improving and there’s some strange dude skulking around the courtyard offering to help? Doesn’t that, at the very least, strike you as a little odd? No?  Not even a little? Okay. Maybe it’s just me.

That evening, Arthur is sitting in his chair (looking particularly yummy) while Merlin is pacing and chattering about how not worried about Morgana he is. Arthur basically tells him to sit down and shut up. 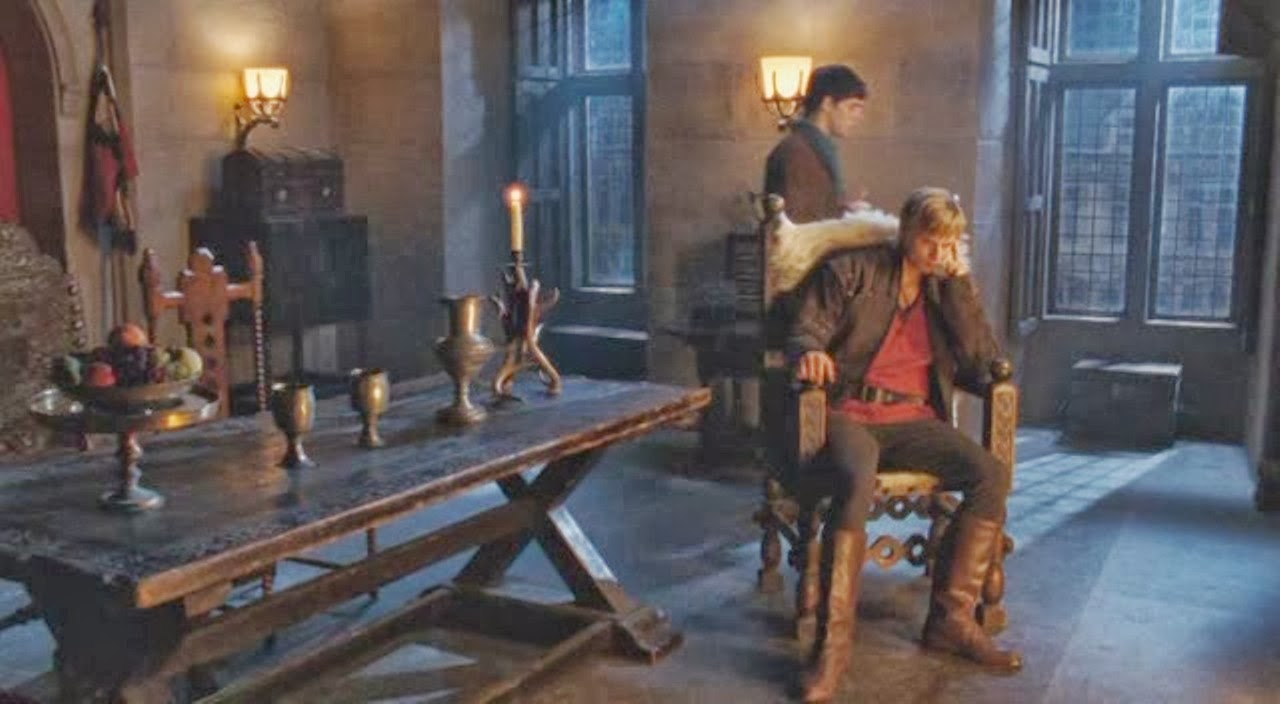 The next day, Arthur, Uther and Gaius are all in Morgana’s bed chamber, and Gaius tells them that she has only hours to live. Arthur tells them about the not-at-all-suspicious dude from the courtyard. It should be noted that Arthur is wearing his super sexy, long leather coat. Not because it plays into the plot. Just because it’s worthy of noting.
Anyhoo, Uther and Gaius are both super dismissive of Edwin, but Arthur argues passionately for him to be allowed to try since Morgana is about to die. They finally relent and Edwin arrives.  As soon as Gaius sees Edwin, he knows they’ve met before. Edwin insists they haven’t. Gaius is all kinds of suspicious. But Uther sets him up in a guest chamber and Arthur hands over Merlin as Edwin’s servant while he’s at Camelot.

Merlin helps Edwin set up all his scientific (alchemy) stuff and then they head out so Edwin can examine Morgana. As soon as he’s in Morgana’s room, he demands that everyone leave and Uther’s all, well okeedokee if that’s what you need. Seriously, Uther? You’re just gonna let some strange man that you’ve known for all of about five minutes be alone with your ward? Really? You don’t think that’ s a little sketchy at all? Okay, then. (Idiot.) 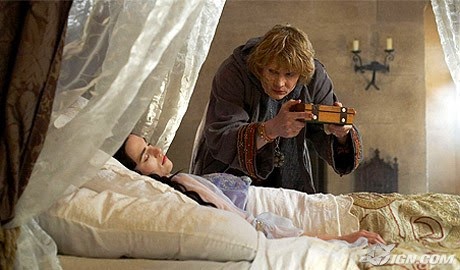 So everyone files out and Edwin prepares to magically calls the nasty little beetle out of Morgana’s ear. Only Gwen didn’t get the memo about everyone needing to be out of Morgana’s room and is immediately suspicious of him. He tells her to go get some water and she insists that someone should be with Morgana because apparently she’s the only one in this castle with any common fucking sense. But he bullies her into going saying that unless she brings his some water Morgana might die. 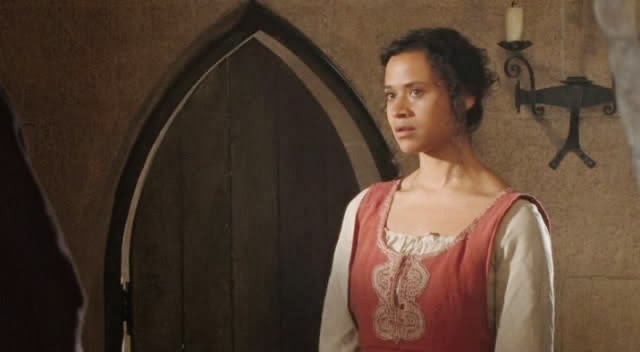 Spoiler Alert: Edwin is kind of a douche.

He gets the bug out and plants some blood in Morgana's ear. Then he tells Uther that it was a misdiagnosis (casting shade at Gaius) and of course Uther believes Edwin rather than the man who's served him for decades, but you know, bygones.

Morgana is looking perfectly fine, now and Gaius confronts Edwin under the guise of offering him his congratulations for curing Morgana. So it's all passive-aggressive up in the halls of Camelot. Uther offers Edwin whatever he wants as a reward which Edwin graciously declines. Seriously, it's extra-gracious. So much so, that you're left kinda wanting to throat punch him because it's not remotely believable. Uther then offers him a place in the palace as Gaius' assistant. Edwin, graciously (of course), turns it down but says that he'll stay until Morgana is completely recovered.

Gaius goes to everyone's favorite castle genealogist, Geoffrey, to ask for the record of The Purge. The Purge is the nice way of saying that time when Uther killed all the people of the land who had any kind of magic. The records are sealed and Geoffrey refuses to hand them over. Geoffrey is a pretty hardcore rule follower. 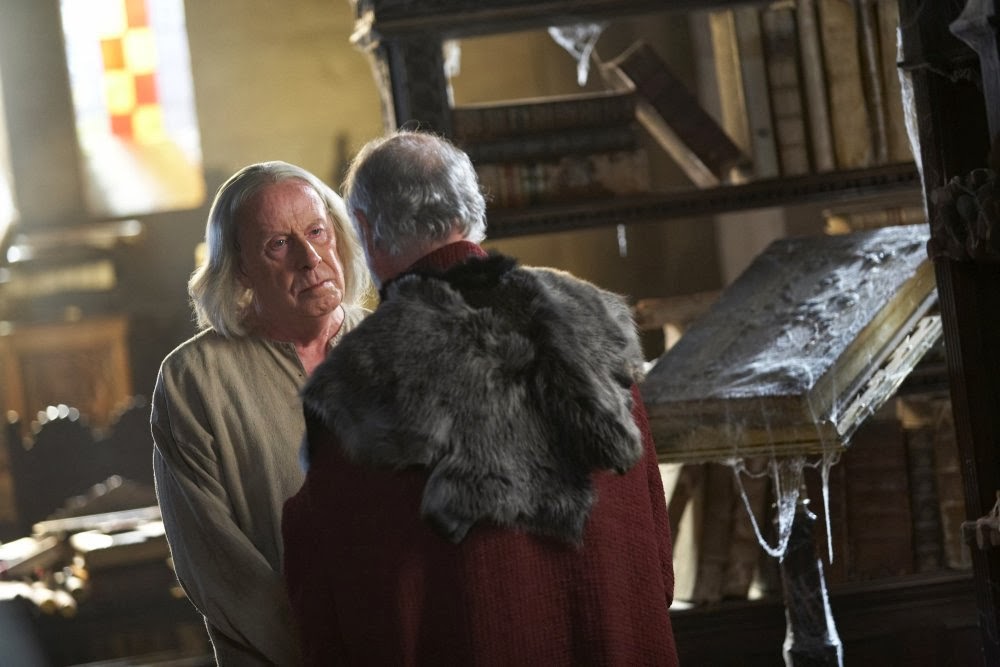 Merlin is poking around in Edwin's chambers and discovers the disgusting magic beetles. Edwin comes in and catches him and realizes that Merlin has magic, too, and tries to convince him that he should be using his magic all the time and offers to mentor him.

Geoffrey shows up in Gaius' chamber with the records, deciding to be a rule breaker after all. Meanwhile, Uther and Edwin are having supper and Edwin, with the bitchtastic skills of my kid's vice principal, disses Gaius and completely undermines him to the point where Uther asks him to review Gaius' previous cases.

Gaius has been up all night studying the records. He goes to confront Edwin about him lying to Gaius about his identity. Uther had Edwin's parents burned to death during the purge and Edwin was scarred trying to save them - Gaius treated him. Gaius figures out that Edwin is there to take revenge against Uther. Gaius threatens to tell Uther about Edwin and Edwin threatens to tell Uther about Merlin and his magic. So they're at an impasse.

Edwin works hard to discredit Gaius, and of course, Uther believes him. Uther considers relieving Gaius of his duties. Morgana defends him, but Uther is having none of it. That night while Merlin is asleep, Gaius sneaks down to the dungeon to see the dragon. He asks the dragon about Merlin and whether or not Uther must be sacrificed for Merlin.

Gaius is hurt, but isn't terribly surprised when Uther retires him. He packs up his stuff and Merlin is upset. He volunteers to go with Gaius, but he turns Merlin down. They have a tearful goodbye. Gwen tries to talk Gaius into staying, too, but he refuses. But she tells him she doesn't trust Edwin - that Morgana didn't have blood in her ear - that Edwin planted it. Gaius leaves anyway.

In the meanwhile, Edwin offers Uther a new prescription for an old shoulder injury. That night Uther drinks the new medicine and finds himself paralyzed. Edwin comes in and reveals his evil plan of revenge and puts one of those damn beetles in his ear so it can eat out his brain and Edwin can return magic to Camelot. 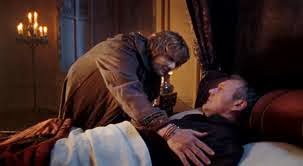 Gaius has second thoughts and returns to Camelot where he again confronts Edwin. They fight, but Edwin's magic is stronger than Gaius' He throws him against a wall and then starts a ring of fire around him. Merlin comes in, figures out that Edwin is the big bad and demands that he release Gaius. Edwin offers Merlin a place by his side in ruling Camelot. When Merlin refuses, Edwin magically lobs an ax at Merlin's head, but Merlin's magic is stronger, and he sends it back and it kills Edwin. 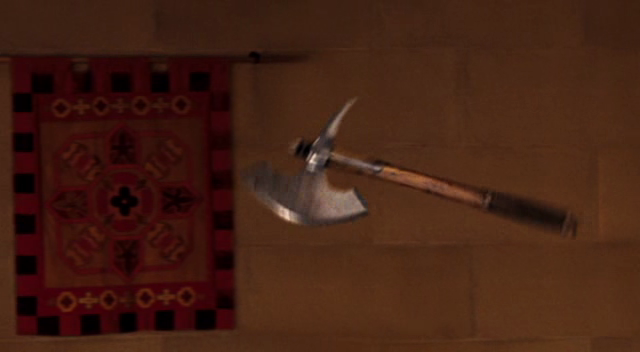 Gaius and Merlin run to Uther's chamber to save him and Merlin uses magic to get rid of the beetle. Good thing Uther is unconscious, huh? Gaius is proclaimed a hero and Uther reinstates him as court physician and awards him his freedom making him a free man of Camelot. 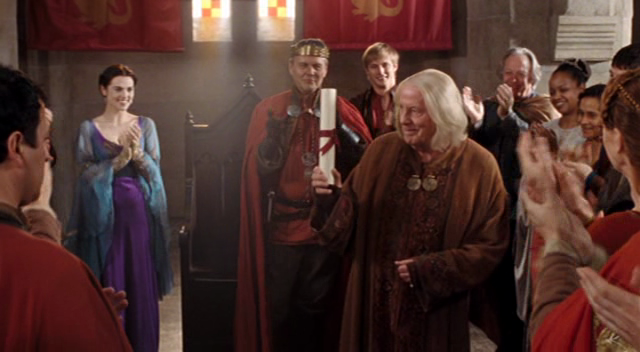 Okay…now on to the questions!

1.    If I’d written this episode, I'd have someone besides Gaius question Edwin's convenient arrival coinciding with Morgana's incurable illness. Good lord, Uther is suspicious of every other damn thing, but not this?
2.    The thing I loved/hated most about this episode. I loved Gwen having the common sense to insist that Edwin shouldn't be alone with Morgana. I hated that no one really seemed to sufficiently check out Edwin.
3.    Something you’ve never noticed about this episode before.  Uther's leather pants in the second to the last scene. 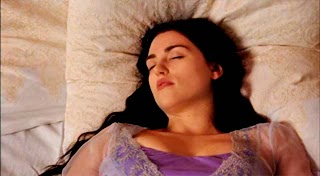 5.    Here is Proof of some random head canon I’ve created. Since my head canon involves Uther and Morgana – Uther seemed a little too familiar with Morgana sitting on her bed like that. More like a concerned lover than a father figure.
6.    What Merthur moment did Jess have the naughtiest thoughts about? This was another not very Merthur-y episode - but the interplay with Merlin pacing in Arthur's bedchamber and driving him batshit crazy comes to mind. Mostly, because I assume Jess was imagining Arthur turning Merlin over his knee.
7.   What made Jen lose her shit (in a good or bad way) in this episode?  Everyone just blithely leaving Morgana alone with a complete stranger.

You can read Jess' recap here and Jen's recap here! And you can join us for Merlin Club on Twitter on Monday nights at 8pm EST - #MerlinClub

I love that the two of you had never noticed his leather pants. Rest assured, I had noticed.

We both picked Morgana's jammies. Weren't they lovely?

You are correct about the scene with Merlin and Arthur (like the only significant one between them, for crying out loud). And I can say I enjoyed watching Colin tap his fingers on the table...oh that man's hands.

This episode was a nightmare for me. I once had a bug crawl in my ear while I was sleeping. I had just about the worst ear infection imaginable. And that is precisely why I will never go camping ever ever EVER again! This whole episode I had to keep my hand over my ears.
I was also really upset that they left an unconscious person all alone with a stranger who claimed to be a doctor...wtf!
And just because I am now know for my store of information, did you know Bradley went to high school in America? It was some where in Florida. I can tell it was not my old hs in Ohio, cause he never would have made it out of there alive. Farm girls would have eaten him alive!