I'd like to introduce you to debut author Ninette Swann whose first book, Hit and Stay, comes out today! Ninette has kindly agreed to give away an ebook to one lucky commenter. All you need to do is comment and leave a valid email address before Tuesday, May 29th at 7pm. 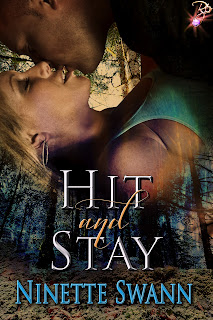 How did your writing path evolve?
-- My writing evolved as my life evolved. As a young woman, I wrote a bunch of schlocky, meaningless crap that I thought was "really deep and lyrical." I've since learned that just because it doesn't make sense doesn't make it poetic. I got off that path by running out of time to write, by giving up any dream of becoming a writer, and living life instead.


What type of research do you do for your books?
-- It depends on the type of book I'm writing. I do only as much research as I have to, to get the facts correct. I don't want to read too many police cases covering my plot line, in case I then can't get my fiction rolling after that, with all the real life happenings swirling in my head.


From what or where do you derive the most inspiration for your stories?
-- I'm a mother, a journalist, an editor and then a writer. My inspiration comes from those facets of my life, in that order.


Tell us about your upcoming releases?
-- Hit and Stay will be my first romantic suspense. A police officer, mired in an internal investigation for one of his previous cases, finds himself on the scene of a hit and run. The victim is a high-powered politician's fiancee. She discovers her fiance is involved with some incredibly shady business and makes a break for it while recovering from her crash in his home. She calls on the ex-cop for his detective skills, and they go on the run. Together they piece together the events of the crash, finding out a good deal more about the past, and each other, than they expected.


What are you working on at the moment?
-- I'm working on a collection of re-told fairytales from the point of view of the step-mothers / parental figures. I swear when I started it, no one was doing it. Curse my slowness, and the two shows and the billion movies and books that have come out since I had the idea. You'll just have to take my word for it, I guess. Hah.


What do you like best about being a writer?  What do you like least?
-- It's fun. It's incredibly freeing. To think something, then write it down, then have it read is an amazing validation in its own right; one that's often forgotten. As far as what I like least? For creative writing, I hate the lack of deadlines. Having been a journalist for so long, it's very hard for me to write something that's not due on-air in OMG 90 SECONDS. That's just bad habit, though.


What would you do if you weren’t a writer?
-- I have no idea. Everything I've ever done has involved writing on some level. If I hadn't had my kids, and moved away from my job, I'd probably be doing public relations or producing television news, still.


What do you enjoy doing when you’re not writing?
-- My kids are still quite small, so I spend the majority of my time playing with, going to parks and libraries and museums. It's a very tough life, but somebody's got to do it.


Of all of the characters you’ve created, who is your favorite and why?
-- Burt is my favorite character. I cut him out of Hit and Stay by more than half from the original because he was stealing all my scenes. I love a good, chintzy, crass reporter.


Do you find it difficult to keep love/sex scenes fresh and interesting?-- Yes. There are only so many words for penis.


What genre of books least appeals to you and why?
-- Well, having young kids, I read a lot of children's books, so my standards for those have gotten pretty high. You'd never think that children's books could really be bad, but so many are. Just because children are small doesn't mean they should be talked down to, or told inane things. I want my kids introduced to good writing right off the bat.


If you were stranded on a desert isle, what five things would you want to have with you?
-- a fresh water source, a machete, rope or twine, flint, lighter fluid


Do you have any pet peeves?
-- Being asked something more than a million times in five minutes. Thanks, kids.


What do you like about where you live?
-- That family is here. I'm not so much a fan of my current location but they make any place worth it.


If you could travel back in time, would you? If so, what time period would you visit and why?
-- I wouldn't want to go back in time. Every time period that is romanticized in my mind--like the 1950s or the 1920s--in reality must have been a very difficult time to grow up as a woman. I would never give up my rights, not even for all the heels and martinis in the world. Plus, we can still do that today, right?

Posted by Bronwyn Green at 6:26 AM

Hey Ninette! Congrats on the new book! I don't know how you do it all with toddler twins! I bow to you :-)

I'm in love with the Author already and I haven't even read the book yet! I hope I win!

Ohhh, I'd love to win. The cover is steamy!

Mothertrucker, I did not leave a valid e-mail address. I'll try again.

Ohhh, I'd love to win. The cover is steamy!!

I read the excerpt on your blog and I'm hooked already and I want to finish reading the story NOW, damnit!

Congratulations on your new release, Ninette!

Sounds Great! Count me in please. Thanks!

Congratulations. The plot sounds interesting and it's always nice to discover new authors.