Interview and Giveaway with the Awesome A.M. Griffin

In October, I had the privilege of meeting the delightful, not to mention, drop dead gorgeous, A.M. Griffin.   We were seated next to each other at the RomantiCon book signing and I had an absolute blast with her, so I'm thrilled to be hosting her here today.

She'll be giving away a ten dollar Amazon gift certificate to a lucky commenter, so please sit back and get to know A.M. Griffin and don't forget to leave a comment between now and noon on December 20th. And definitely don't forget to check out her first ever release, Dangerously Mine from Ellora's Cave - I know I'm going to! 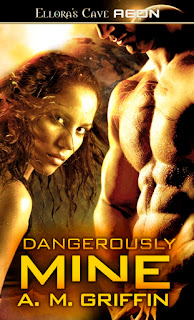 I’ve always written stories. I should rephrase that to say I’ve always started to write stories. I would get to the third or fourth chapter and stop, become disinterested and move on. This is the first time that I actually finished a story to the end. I wanted to put this one down as well, but a little voice told me to get over the hump (which I now know is writers block) and keep going. It was an eye opening experience to say the least, but well worth it. Once it was done I had a sense of completeness. Now I can’t seem to stop writing.

What type of research do you do for your books?

That’s the beauty of writing sci-fi. Little or no research is required. All the info comes from my imagination (which might actually be scary). For Dangerously Mine I had to look up fighting techniques and weapons which gave me a sense of how badass Eva would have to be in order to wield a bow staff and also how lethal she would have to be if she was used to throwing knives or stars. Every now and then I would ask my crit partners if a scenario (mainly regarding different planets) made sense or was it even plausible and the answer would be, “this is your imagination, if it makes sense to you it’ll make sense to us.”

Tell us about your upcoming releases?

Dangerously Mine is a story about finding love and a new life after a catastrophic event. Because this is a sci-fi story the catastrophic event just so happens to be an alien invasion. This is not a story where she’s plucked from her bedroom by a hunky alien who wants her to be his life mate. Eva has gone through a lot, she’s seen loved ones murdered and she’s been plucked away from Earth as the alien invaders rain devastation all around her. She’s lost her closest friend (someone she has promised to take care of) and she’s sold into slavery. By the time I introduce Taio (her hero) I want the readers to be rooting for her. Now mind you, the readers are going to have to keep rooting for them because they’re both bull-headed characters who don’t know a good thing if it smacks them in the face.

What are you working on at the moment?

I finished the follow-up book to Dangerously Mine. I just have to clean it up some. In this book we learn more about Princess Sa’Mya who is a character introduced in Dangerously Mine and why she’s such a bitch, but we also get to meet Kane. I love Kane and Sa’Mya together. I think he’s the perfect guy for her. I can’t wait to release this on the masses.

I love having the opportunity and outlet to create different characters and different worlds. In my mind there’s nothing better than being able to put my imagination to pen and paper. In saying that, as a writer you put yourself out there. I understand that not everyone is going to ‘get’ me and that’s ok. But it would be awesome if everyone did, then I could rule the world (just kidding, sorta).

What do you enjoy doing when you’re not writing?

I love reading. I’m a reader first and writer second. I haven’t been able to read that much this past year but that hasn’t stopped me from buying books. I’m 20+ books behind right now. As soon as I can stop my characters from invading my head, I’ll knock some of those books off of my ‘to be read’ list.

Of all of the characters you’ve created, who is your favorite and why?

They’re like my children so I can’t just claim one. But if I had too…I love Eva from Dangerously Mine. I kinda worked her in the second book that I finished and the third book that I’m working on. She’ll always have a special place in my heart.

Do you find it difficult to keep love/sex scenes fresh and interesting?

I’m working on my third book and so far I haven’t come across that issue. When it comes to sex my characters have a mind of their own. So far, my new characters are avoiding the bed and its ok with me.

What genre of books least appeals to you and why?

I can’t read anything too serious, like inspirational books (yuck).

Do you listen to music when you write or do you need quiet?

I don’t really listen to music while I’m writing. I do watch or have the television going most times.

What makes a man sexy?

I love a man’s walk. The way his clothes fit him. Sometimes a look will even send me over the edge. But I think most importantly a sense of humor is sexy.

Do you have any bad habits?

If you were stranded on a desert isle, what five things would you want to have with you?

My hubby, three kids and a knife for hunting. We’d be fine. I’d whittle us some spears.

Do you have any pet peeves?

Way too many to mention here. People with hangnails top that list and it only gets worse…

I’ve lived in different parts of the country and although I hate the winter, I love my home state. We are a great bunch of open minded people with our own special gripes, but I think if it was us against another state, say against Ohio or Indiana, we would mob them. Yeah, we’re feisty northerners.

If you could travel back in time, would you? If so, what time period would you visit and why?

Uh, no. I like the comforts of hot water, microwaves, technology and adequate healthcare.

I read The Darkest Seduction by Gena Showalter and now I’m totally hooked on that series. I also discovered Nalini Singh not too long ago. Archangel’s Blood made me a forever loyalist.

What was your favorite childhood storybook?

I can’t ever remember reading anything fun when I was younger. Odd.

Ninja baby. In my head I’m skinny, wearing all black and can scale walls.

Coffee with lots of cream and sugar.

Angel. Spike wasn’t all that cute. He reminded me of a bad Billy Idol imitation.

Mal or The Doctor?

You can find A.M. Griffin at the links below. Be sure to check her awesome self out! Following the links are the blurb and excerpt for Dangerously Mine.

After aliens invade and conquer Earth, Eva is transported to a distant slave trading planet. Escape and freedom are her only priority, but none of her martial arts training prepared her for what she faces. She finds herself enslaved to the warrior King Taio. Eva’s drawn to this sexy alien male who ignites her heart and body.

Taio is disgusted with the idea of owning a slave—until now. From the moment he sees her, he knows Eva is his for the taking. Torn between lust and duty, Taio knows nothing will stop him from protecting his little warrior.

Great excerpt and interview. I used to love mac and cheese but cannot have it any longer.
debby236 at gmail dot com

Sounds like an interesting book! Nice to meet ya, A.M.! :)

Science fiction is my favorite genre. This book looks great!

Ooh, I love the reluctantly buying someone premise. Perfect for immediate tension! Congrats on your first release!

Oh, and you definitely need to watch "Firefly"—you'll enjoy Mal. ;)

Thank you everyone. And Debby I think I'd die if I couldn't mac and cheese at least a couple times a month. Ruby, I've seen Firefly a couple of time and I do love it!

oooh nice! Congrats on your release :)

Oooh this looks awesome, loved the excerpt. Thanks for having a giveaway!

Thank you Anya and Lily!

Awesome, this was a absolutely superior post. In approach I'd like to address like this too - demography time and absolute accomplishment to accomplish a acceptable article... but what can I say... I adjourn alot and never assume to get something done. estetik
• Hi, nice site you have here! Keep up the excellent work!
Estetik

Thanks everybody for stopping by! I'll let Bronwyn pick the lucky winner. Good luck!