Let me tell you the tale of how I'm the worst mom ever.

It involves Doctor Who.

I know what you must be thinking. How can anything involving Doctor Who be a bad thing?

For those of you who don't watch Doctor. Who, let give you a teensy bit of background.  There are some monsters on that show that are super creepy. For instance, I find the children in the episode, the Empty Child to be immensely  creepy. The doctor goes back to WWII England during the London Blitz and there's a little boy wearing a gas mask wandering around terrorizing the citizens of London and if I remember correctly, anyone who touches the boy will turn into an empty child, too. So this kid just skulks around, saying "Are you my mummy?" in this proper little British accent which ends up making him sound even creepier.

This is him. Now imagine him coming up to you and repeatedly asking, "Are you my mummy?" This damn episode gave me nightmares.

And when Corwin's Halloween costume this year required a gas mask, Killian would put it on - along with his best British accent, creep up behind me and ask, "Are you my mummy?" I was understandably unnerved. Read: freaked the hell out. 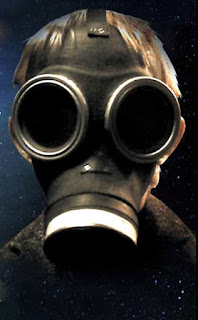 Imagine my delight when I found a way to get him back.

Okay, so Killian, our resident Whovian, is utterly creeped out by The Weeping Angels. The thing about the angels is they don't move to attack you unless you're not looking. So the doctor's advice is: "Don't blink. Blink and you're dead. They are fast. Faster than you can believe. Don't turn your back. Don't look away. And don't blink. Good Luck." 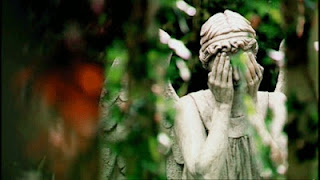 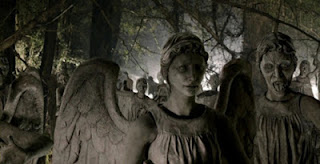 Fast forward to a few days ago. I opened a new box of Red Rose tea. It's my favorite - and *not* because it comes with little porcelain figurines. Those are frankly a pain in my ass because I feel guilty about throwing them away. (Yes...I know.  I have issues. So. Many. Issues.) But anyway, I was delighted when I opened this box of tea, because nestled in with the tea bags was a hideous little angel figurine. 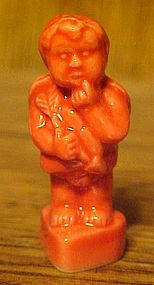 He's supposed to be a cupid. But he's terrifying! Delightfully terrifying.

I handed him to Corwin who stood outside the bathroom door waiting for Killian to get out. As soon as the door opened, Corwin shoved the angel in Killian's face and said, "Don't blink!"

Later that day, while he was at school, I texted him this picture. 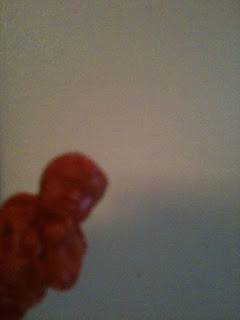 With the message: "Don't Blink!"

Later that day, I hid the angel on top of his computer with a bunch of other stuff so it was staring at him. Watching him while he worked. I waited desperately for him to notice it. It took four, long and agonizing days, but it was soooooooooooo worth it.

Last night he stalked into the living room.

Killian: What the fuck? What the actual fuck?

Killian: Yes there's a problem! THIS (thrusting the creepy little angel in my face) was on top of my CPU. Watching me.

Me: Don't blink. (Well, that's what I tried to say. What came out was the sound of a cackling hyena on speed. I laughed so hard, I couldn't catch my breath. Or stop crying.)

He (foolishly) put the angel on my computer.

This is not the end.

Also, Jen gave me the best link ever, which I will soon be making use of.

There will be another blog post. Because I am a terrible, terrible mama.

That is all kinds of awesome! Those angels creeped me out too. Well played mamma, well played!

We will talk...you are a genius and I will have my revenge on my eldest child as well....this is good, this is really good... this is a really, terribly, good idea...

Yes, gas masks are seriously creepy. Not much in this world sooks me out. There again, I think the entire world of ignorance scares the hell out of me. And what society is reduced to doing to the innocent and neglected few. I am a loner and do not fit in anywhere in this world. I must've come to earth as a forewarning of what is to come. Darkness is coming for England because the politicians have deserved it all along. 60+ years we've had of government rulership. And have they ever listened to The Populace?

And FYI "The Empty Child" gave me nightmares too, kept seeing everyone around me with that goddamn gasmask face... ugh...

Your children will grow into well-adjusted adults who understand that their mother is capable of wickedly intelligent pranks. Their respect for you will translate into a healthy appreciation for the capabilities of those around them to make their lives miserable. Or fun. :D You're a great Mom!

Don't toss the little figures! Send them to meeeeee and I will reimburse the post. Not kidding

Um, Best Mama Ever! The Doctor can never, ever, ever be bad. Or associated with anything bad. I see nothing at all wrong with this. I am suitably impressed. :)

Oddly enough, I didn't freak out at the repeated "Are you my mummy?" It the sing-song "Muuuuumeeeeeeee..." that was creepier to me and the creepiest, most terrifying thing was the gas mask growing out of the doctor's face when he became afflicted.

It was the way his face distorted and his eyes expanded to become the gas mask eyeholes but still momentarily looked like eyes... I literally have to close my eyes when that bit happens because I can't watch it!