They're baaaaa-aaaaack. They're awesome. And they're giving away their new book! 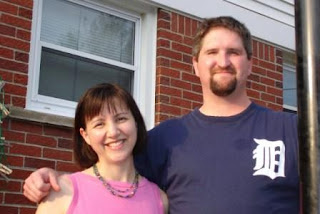 Today on the blog we have a writing duo, Margaret Yang and Harry R. Campion, who write near-future thrillers under the shared pen name M.H. Mead. You may remember that last year, they visited my blog to tell us about their first novel, Fate’s Mirror. Today, they’re back with a brand new book. The Caline Conspiracy takes place in the same world, and shares some of the same characters, although it’s a stand-alone novel.


And bonus! They're giving away an ebook copy to one lucky commenter! So leave a comment with a valid email address and you'll be entered to win. A winner will be drawn on April 4th at or around 7pm. 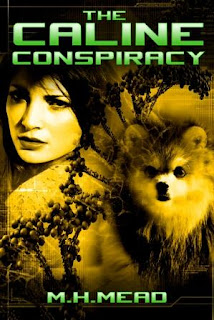 1. Will you each tell us a little bit about your new novel?

Harry: It’s about a monster. A horrible monster.
Margaret: What?!
Harry: There’s a teenage boy in it.
Margaret: Oh. Right. Plus genetic engineering, murder, ideal pets, a smart private eye...
Harry: We put a plot in there somewhere too.
Margaret: Well, I  put in two.
Harry: I handcrafted two metaphors and a simile.

Okay, but seriously. Here is the blurb.

PI Aidra Scott is exasperated by her teenage son, worried about her pregnant sister, and flummoxed by her assistant—a computer genius she’s never actually met. She lives in a tiny Detroit condo she can barely afford, and there is no room in her life, or her heart, for a pet. Since the painful loss of her beloved Doberman, she wants nothing to do with any dog, certainly not a genetically engineered dog.

The world is shocked when geneticist Ivan Frithke is murdered and his own caline is the prime suspect. Madeline, like all calines, was genetically engineered to be the ideal pet—smart, gentle, and loyal. How could she kill her master? The widow doesn’t believe it, and hires Aidra to prove Madeline’s innocence.

The case is both public and hopeless, and Aidra knows she shouldn’t take it. Besides, saving this dog won’t bring her dog back. But the more Aidra investigates, the more she becomes convinced an innocent animal is being framed, and murder is just the beginning of the conspiracy.

2. If Calines were available, would you own one – why or why not?

3. What was your favorite childhood storybook?

Harry: To Think That I Saw It On Mulberry Street by Dr Seuss. A book dedicated to exaggeration and lying to one’s parents. What’s not to love?
Margaret: I read and re-read Harriet the Spy by Louise Fitzhugh. She spied on her neighbors and wrote down everything they did. Perfect training for a writer.

All of the above, but a double-helping of Firefly with Serenity for dessert.

PIRATE! Did you even have to ask? (See Fate’s Mirror if you need a reason.)

7. Complete this sentence, “Let’s get down to business before...

two o’clock rolls around.”
We live an hour apart from one another, so when we write together, it’s an all-day marathon. We waste a lot of the morning chatting. (It’s part of our process. Don’t judge.) We also drink a stupid amount of coffee. By two in the afternoon, we are giddy with caffeine and everything starts to get ridiculous.

Come to think of it, it’s amazing we finish as many books as we do.

Harry: My favorite place in the world is Isle Royale National Park. I’ve camped and canoed there numerous times and I love it more each time.
Margaret: I’m crazy about Disney World. It’s supposed to be for kids, but it’s the moms who love it. The service there is almost unreal. I mean, where else do people kiss your ass all day and seem to like it?

9. The zombie apocalypse is practically upon us – which of you is most likely to live and why?

Harry: I am.
Margaret: He is.
Harry: I know how to survive in the wilderness and I collect swords.
Margaret: My brains are delicious.

10. If you could serve under any Star Fleet captain – who would you choose and why?

Captain Picard. Although we do not care for Earl Grey tea, we like our authority figures to have Picard’s cool aplomb. He will never freak out, even when the universe is at an end.

Kind of like this interview is at an end. (Nobody freak out, now!)

Thanks for letting us visit your blog today, Bronwyn! It was great fun.

To find out more about Margaret Yang and Harry R. Campion, visit their website.
You can also find them on facebook.
Or follow Margaret on Twitter.
And if you don't want to wait for your own awesome copy of The Caline Conspiracy and can't wait another minute, you can skip over to Amazon or Barnes and Noble!

I finished this book last night and I have to say, it's AWESOME! Fast paced and perfectly tense in parts. I'm fascinated with the idea of calines...though I'm not sure about living with one. I might be more of a perficat person. (Just not one like Paris! - eep!)

OMGosh you guys crack me up. I've met Margaret but not the other part of that duo. Please include me in the drawing. :)

I LOVE Disney World:) That's my dream 'retirement' job. And after reading Harriet The Spy, I tried following people around....but got caught:(

Okay Margaret, when the zombocalypse, just stick to your house, and we'll send somebody to get ya.

But if the Clownocalypse happens, you are on your damn own. Clowns weird me out.

I love sci-fi. I wish I had read the other book. Sorry I missed that post.

And as for the Zombie apocalypse... if you throw Harry out first, you can escape while they're devouring his not so tasty brains!

I need a Caline, not that I know anyone who needs killing. Seriously.
Shanti

Someone is framing the dog for murder? You two crack me up. Congratulations on the new release!

Great post! Very funny :-) If the book's as good, I definitely want to check it out!

"I handcrafted two metaphors and a simile." The hallmark of a good book. I hope you didn't get hurt in said crafting. :)