Right before Christmas, I was petting Rowan, and I felt a lump in his side. We took him to the vet and had our worst fears confirmed. It was cancer. The doctor said that the lump was a tumor that was taking over his right kidney and he also had metastatic spots in his lungs.

The good part, he'd said, was that the cancer was painless. But there would come a time when his systems would start shutting down. But until then, we should take him home and enjoy our time with him. We did. A lot. He remained as loving and sweet as ever, but as the tumor grew to softball size, it became more difficult for him to move around. We had to help him up onto the couch so he could sit by us.

Yesterday, he stopped being able to process food and we knew it was time. We brought him to the vet and said goodbye to him last night. I'm going to miss my elbow nibbler and hair stylist.

We took him in when he was about 4 weeks old. He'd been found wandering on a super busy four lane road. Thankfully, some kind soul rescued him before he was hit. We got him a week after Killian's first birthday. Rowan turned 16 in August. 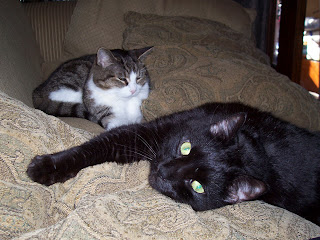 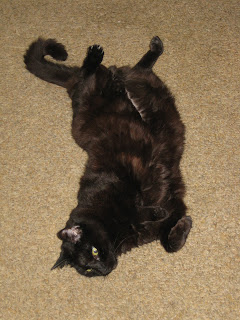 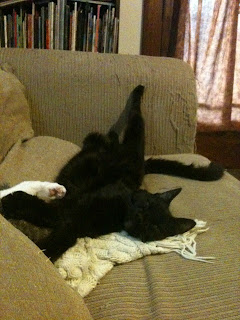 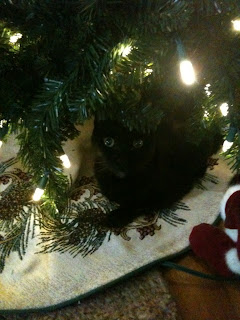 Posted by Bronwyn Green at 7:44 AM

I'm glad you got to have so many great years with him.

Aww... but such a peaceful end, and such a long life. Sweet boy. *pets*

You gave him an amazing life. You are so awesome.

Godspeed Rowan. You will be missed more than you know.

I am so sorry for your loss. Glad you got to say goodbye.

He had a wonderful, loving life with you and the kids:)

Oh, so so sorry to read this. It's so hard to lose a loved one that's such a part of your life. Many ((hugs)) to you.

Oh, Chris, I am so sorry to hear this. Hugs to you and the family.

So sorry, hon. At least he's at peace now xx

Huge hugs to you!
I'm all teary over here :(

You gave him a great life and it shows <3

Bark At The Ghouls said...

I'm so sorry for you and your sweet kitty. It's so hard to lose them no matter the age :(

I know exactly how you must feel. I'm about to go through the same.