We had to be at the school by 4:30 am in order to board the bus to leave at 5 am. So armed with pillows, blankets and backpacks, we shuffled onto the bus, collapsed in our seats and got underway. The chatting was minimal as the kids talked quietly and the adults tried to fall asleep. That wasn't to be. Instead, we had to watch a twenty minute safety video on how to ride the bus properly. When it finally ended, I thought, "Yes! Sleep!"

Again, that wasn't to be. Apparently, someone thought we should all watch Finding Nemo at the loudest setting possible. And when that was over, A Bug's Life and when that was over, Charlotte's Web. The live action one with the giantass evil spider (yes, I know Charlotte's nice and saved Wilbur's life, but she's still one of Satan's Snowflakes) and it freaked me out. No matter how much I tried to look away from the multiple screens, I found my eyes inexorably drawn back every time I heard Julia Roberts' voice.

The kids were hyper and bouncing off the ceiling, several of them having brought cans of Monster with them. Seriously, there's no way 12 and 13 year olds need energy drinks. But as annoying as the movies, loud, spastic kids and cramped seats were, it was nothing compared to the ride home. Kids screaming, standing in the aisle and my favorite part of the ride, the bitchy adolescent girls and their equally snide, bitchy moms. Let me just say that if my kid were saying horrible hateful things about other girls in their class, I sure as hell wouldn't be giggling and agreeing with them. And we wonder why kids think it's okay to bully.

Oh well, at least I got some knitting done.

The bus tour of the ninth circle of hell aside, the field trip was great. For those of you who don't know, Mackinac (pronounced Mackinaw) Island is a 3.8 square mile hunk of heaven smack in the middle of Lake Huron. There are no motor vehicles allowed on the island. All deliveries are made by horse drawn carriage or wagons and bicycles. Need a taxi? You get a horse drawn carriage. The only way to the island is via ferry - about a 20-30 minute ride from the mainland. Or, in the winter, you can take a snowmobile across the ice.

The island was strictly populated by Native Americans until the Europeans began arriving in the 17th century. It played an important part in the Great Lakes fur trade and during the Revolutionary War, the British built a fort there that's been beautifully restored. Several battles during the War of 1812 were fought here and the island became a popular place to summer in the late 19th century.

I took a ton of pictures, but these are some of my favorites.


One of my favorite spots on Lake Michigan. I would love to live in that house off to the right. Sigh... 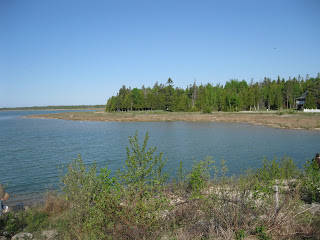 The Mackinac Bridge from the Lake Michigan side. 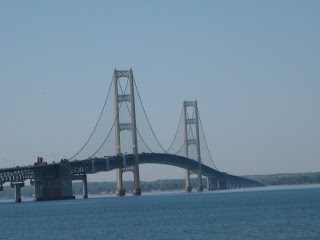 A gorgeous view from the fort. 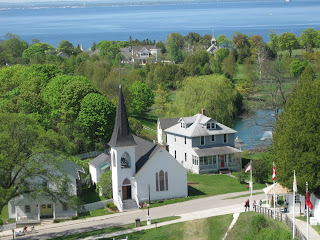 Another gorgeous view off the front of the fort. (Click picture to embiggen to see how pretty it is.) 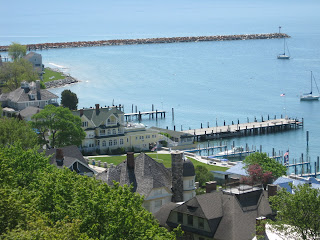 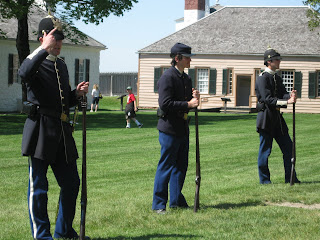 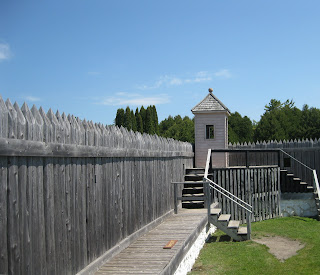 A shot of an ore freighter over the soldiers' barracks. 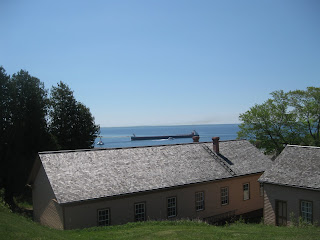 A typical sight on the island. I would have rather been on horseback than the carriage, but we had to stay with the group. *pout* 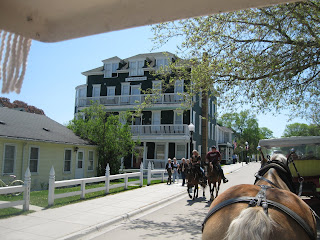 The Grand Hotel (where the movie Somewhere in Time was filmed) and our horse Charlie's bum. 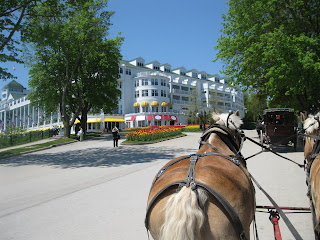 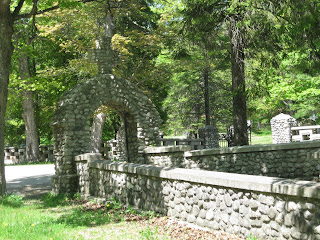 A view from our carriage ride. 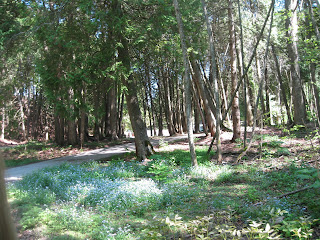 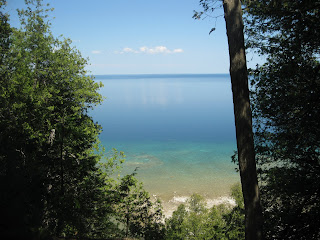 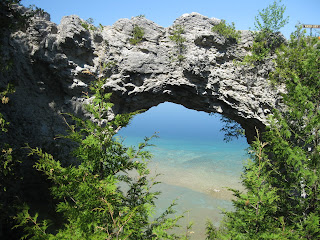 One of many gorgeous houses on the island. 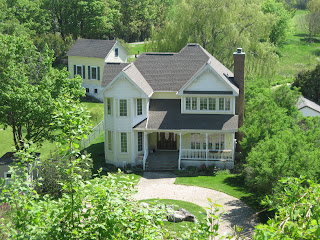 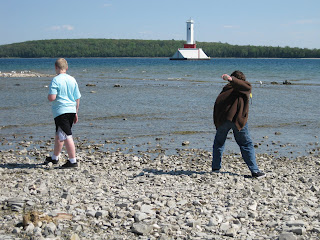 Posted by Bronwyn Green at 3:55 AM

Well, at least the actual Mackinac Island part of the trip was gorgeous!!

I want to live THERE! It's pocket change, right? Right?

I sooo love the pictures. It is a beautiful part of the world, no doubt. Very jealous, but glad you had such a great day for the trip.

Oh, and the snickering girls and their moms... they should be hung up by those oh so perfect fingernails...

*breaks one of those perfect fingernails*

Glad you survived the trip!

You called it perfectly on the bullying. Yeah!

The pictures are gorgeous, gorgeous. Maybe the hunk and I will plan a trip...

If I'm doing the math correctly it was a six hour drive one way??? (shudder) And with teenagers? What were the teachers THINKING????

Glad the tour part was worth the trip! Gorgeous pictures! And guess I need to pull out my ATLAS; I thought it by Superior.

Oh, and I'm with Anny...you hit the nail on the head with the bullying...

Seems you had to go through hell to get to paradise. LOL

I don't know about you, but I could totally live there.

And of course, I MUST ask: Is it haunted?

Awwww man! I wanna go here! What a gorgeous and very cool place!

I'm so jealous. Somewhere in Time is my favorite flawed time-travel movie.

@ Chris - It was absolutely beautiful. I would have loved to have stayed longer.

@ Mia - Absolutely. There were a couple of places for sale on the island. No prob - you can swing it. Just 3 or 4 hundred thousand dollars. BTW, found out Corwin's principal has a place on the island. Sigh...

@ Kris - It's definitely worth the visit... :) I think the fingernail hanging is a perfect idea.

@ Chris - Is that a violent streak I'm detecting?

@ Anny - You and the hunk should totally plan a trip. There are tons of converted Victorians all over the island. My favorite hotel is actually The Iroquois. It's gorgeous and sits right on the Lake Huron shoreline.

@ Molly - yes ma'am, it was one hell of a long trip. Lake Superior (my favorite of all the great lakes) is further to the west. :)

@ Genella - OMG, me too! It's so peaceful. The graveyards, the fort and this place called Skull Cave (old Native burial ground) definitely felt iffy.

@ Regina - Come to Michigan...we'll drive up there. No buses, I promise!

@ Jen - I wish we could have gone inside the hotel. But apparently they have rules about groups of unruly school children. Who could blame them?

Im glad you had fun, sounds like typical mean girls who need a good pimp slapping, and I've never been to MI. I was too afraid when I lived there to go over that bridge!

One of my favorite place of all time. Loved the pics, Bron. Sorry about the bus ride from hell though. *hugs*
~J