From the Ruins - Available Today! 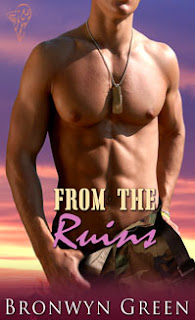 The first story I ever wrote for TEB as part of an anthology is available today as a single title!

This story is really close to my heart because it's based on how my grandparents met during WWII, so I'm thrilled to see it coming out on it's own.

Everyone who leaves a comment between now and Thursday at 6 pm EST will be entered in a contest to win a copy - so comment away. :)

Cardiff Wales, 1943 - Moira Boulton never expected her instant attraction to the American she meets thousands of miles from his home. Not in her home town. Not in the midst of a war. But there's no denying the desire burning between her and the foreign soldier, David Webber.

They barely have time to explore the explosive force between them when an air raid drives them to take shelter. Alone in a dark cellar, with bombs dropping overhead, they take comfort in each other and their undeniable passion.

When David disappears without a word, Moira is left to wonder, if a passion that burned so bright was nothing more than a pleasant diversion or if they actually can salvage a relationship from the ruins.

And here's an excerpt:

“Where are you going? I just got here.”

Moira Boulton and her friend, Bethan, stopped on the stairs of the USO dance hall and stared at the handsome stranger with the American accent and the glacier-blue eyes. Her breath stalled in her chest as she met his gaze. She would have thought that eyes the colour of a winter sky would be cold and remote, but not his. Fiery and intense, his gaze raked over her body, sending tingles coiling through her middle.

Despite his overly forward behaviour, her lips twitched in amusement. “I’m sorry, sir, but do we know each other?”

Flashing her a devastating smile, he bowed slightly, his burnished brown hair drooping over his forehead. “I’m Private David Webber of the United States Army, and if I’m not mistaken, you’re the mother of my future children.”

His companions whom she’d barely noticed chuckled good naturedly as a startled laugh escaped her. “The mother of your children, you say?”

“Well, future children,” he said with a wink.

“How often does that line actually work?”

He obviously wasn’t serious, but he was charming. Shaking her head in bemusement, she offered him her hand. “I’m Moira Boulton and this is my friend, Bethan Jones.”

He nodded politely to her friend as his large, warm hand closed around Moira’s. “Will you give me the honour of the next dance?” he asked. “After all, we have a wedding to plan.”

For a moment, she imagined the sensation of laying her head against his broad chest and feeling his strong arms around her. It was tempting to return to the loud, crowded hall, but she needed to get home. “The last bus is leaving shortly, and we need to be on it.”

His disappointment appeared genuine, but how could it be? After all, they’d just met. “I’m sure there are plenty of other girls inside who would love to dance with you,” she said as she pulled her hand free, ignoring the sour feeling in her stomach as she imagined Mary Katherine Landis in his arms.

He frowned waving away the suggestion and cocked his head towards the open door of the dance hall. “Give me your hand.”

There was something about this man that encouraged her trust. Even if Bethan hadn’t been there, she’d still feel safe with him, but somehow that same sense of trust left her feeling somewhat unnerved. They were in the middle of a war, for God’s sake, not to mention the fact they didn’t know one another. But as she studied his open expression, she realised she wanted to know him. Taking a leap of faith, she placed her hand in his again and allowed him to lead her to the walk-way at the bottom of the stairs.

A lively tune drifted from the building along with the scent of cigarette smoke, and David gently pulled her into his arms. “At least give me the pleasure of a dance until your bus arrives.”

She glanced around the street. “Here?”

He gestured to the darkening sky. “The moon is almost full, and the stars seem nearly close enough to touch. But you’re still the most beautiful sight here.”

Following his lead, she swayed to the faint strains of music. “You’re a right charmer, Mr. Webber.”

“David,” he corrected smoothly. “And I only speak the truth.”

Labels: Bronwyn Green, From the Ruins

Congrats on your rerelease and your print book!!!

How touching to have a story based around your grandparents, Bron! And the cover - YUMMY!!!

Happy rerelease and wishes for many sales!

I loved the excerpt. Who would know it was based on your grandparents. Sounds like a fairy tale story with a happy ending! I am sure this is a great read, the cover is fantastic :)Congrats on the release.

Am feeling a bit sick to discover I have not read this one. Please enter me to the drawing.

The cover is very YUMMY and love the excerpt. Congrats!

Congrats on the new release, Bronwyn!

It looks like a fantastic read, and the fact that it was based on your grandparents true story is wonderful.

It's a lovely story! Congrats on the release!

Happy release day! Don't pick me in the drawing, though, 'cuz I already own this of course.

Happy Release Day! How did I miss this one? Must change that...

I love the fact you based it on your grandparent's love story!

Don't pick me...I already have a copy! ;) But I did love it, and wanted you to know that! Great read!

Wow, that sounds like such a wonderful story. I can not wait to read it. (And that is so sweet that is based on your Grandparents own love story.)

It's awesomely amazing that you've had two opportunities to tell this great story.

congratulations on separating yourself from the "pack". Does the hottie on the front cover come with the book? lol just kidding.

I didn't realize that I had this story missing from my library. I didn't even realize you had this story. It sounds wonderful. No worries if I don't win, I will just have to save my pennies.

Just think, if he hadn't said that about grandchildren, you wouldn't have been here writing for us.

Your Welsh heritage certainly comes through in your writing. If you ever make it back to Wales on holiday, you'll have to stop in for a cup of tea and a Welshcake :)

Congratulations on the re-release and and the print book. Yummy cover! Love a man in uniform!

This sounds fantastic! I just love stories of love within the military! Keep up the great work!