Have you started collecting answers for the contest, yet? Well, on that off chance that you haven't heard about the 12 Days of Romance contest, let me sum up: 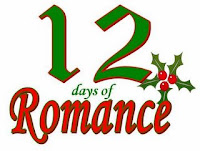 Do you want to win some fantastic holiday reading? If so come celebrate the Twelve days of Romance with 12 authors from Ellora's Cave, Wild Rose Press, Total-E-Bound and Cerridwen Press. Each day beginning December 8th and running through December 19th one of the twelve authors will tell what their "True love gave to them" on either their blog or website.Collect all twelve answers and e-mail them to mailto:anny@annycook.com with 12 days of Romance in the subject line to win some great books.
Deadlinefor answers is December 21st at midnight EST.There will be three lucky winners. The prizes –1st prize--6 books 2nd prize--4 books 3rd prize--2 books. All books and prize winners will be drawn randomly. 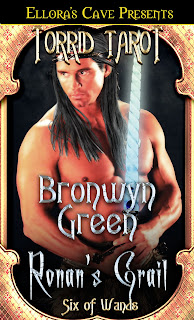 In an attempt to hopefully entice you enter, here's an excerpt from my latest Ellora's Cave release Ronan's Grail (one of the nifty prizes in the contest.)

Despite the fact that it looks like my hero was unicorn hunting, no unicorns were harmed in the writing of this story.

EXCERPT:
Without warning, Morgan was pinned flat against the institutional green wall next to the shower, Ronan's huge wet hand splayed across her upper back, holding her motionless. She struggled against the unfamiliar weight.
“What the hell is the matter with you? Let me go!”
“Cease your movement,” Ronan commanded. His warm, damp fingers lifted the back of her shirt and she fought harder. “I will not hurt you. Remain still.”
Pulling downward, he tugged at the waistband of her jeans, stroking the skin at the small of her back. “You bear the mark,” he breathed.
Mark? What mark? Realization quickly dawned.
“It's just a tattoo.” Morgan's mother had warned her but she hadn't listened. She could hear her mother's voice now. Tattoos make you look easy.
Ronan traced the outline with his fingertip, following the path of interconnected circles and sending shivers through Morgan's body.“You are the keeper of the grail.”
“What?” She struggled to turn her head. “No! That's just the vesica pisces—the symbol of the Chalice Well in Glastonbury, England.” Great…if she remembered her mythology correctly, the Chalice Well was one of the rumored resting places for the grail. After college she'd backpacked around Europe and had fallen in love with the town of Glastonbury. She'd felt a soul deep connection to the place and had the vesica pisces tattooed while she'd been there. Though her mother had complained, Morgan had never regretted it—until now.
Ronan continued to trace the mark, seemingly oblivious to the tremors of desire he sent through her. “I knew Merlin sent me to you for a reason,” he whispered.
Pulling harder on her pants, he bent to more closely inspect the design. His hot breath skated across her sensitized skin and a fresh rush of moisture dampened her core.
“Where is the grail, Morgan?”
“How the hell should I know?”
“You are its keeper,” he murmured as he brushed his calloused thumb back and forth over the design.
“No I'm not.”
He grunted his displeasure.
“Look,” she began. “I'm sorry that some crackpot guy told you that I had the answer to your problem, but he was wrong.”
“Remove your braes so I can better see the sigil.”
She glanced over her shoulder at him. “No.”
His jaw tightened and his eyes glittered with irritation. “I said, remove your braes.”
“And I said, no. It's not gonna happen.”
“Take them off or I will remove them myself.”
She craned her neck to get a better look at him. Fierce intent hardened his gaze and she shivered under his stare. Call her an idiot, but she wasn't frightened of him. She knew he wouldn't hurt her. She wasn't sure, however, about her jeans. He might just shred them to get what he wanted. And why did that perverse thought send bolts of tingling awareness to her cleft?
“I am waiting, Morgan.”
“Get used to it.”
He leaned to the side and reached for something. She followed his gaze. His sword? Panic beat like thunder in her chest and she struggled violently. Insinuating his knee between her thighs, he pressed his groin against her ass and held her more securely against the wall. His granite hard cock was trapped between them and she fought the ridiculous urge to turn around.
“Cease woman! I will not hurt you!”
“Said the man with the bloodstained sword.” She drove her elbow into his stomach, feeling almost satisfied when he grunted.
Hearing the sound of metal against leather, she froze. She'd taught stage sword fighting long enough to recognize the sound of a blade leaving its sheath. She glanced at Ronan and the dagger he held. She hadn't noticed it on his belt earlier, but clearly it had been there.
“This is your last chance, lady. Will you show me or shall I use this?”
Morgan swallowed thickly and her fingers dropped to the waistband of her jeans and released the button and zipper. With shaking hands she slid her pants down—not quite over her ass but far enough for him to see the entire image.
The dagger clattered to the floor as he sank to his knees behind her. He skimmed his hands up the outsides of her thighs until he reached her waist and pulled fabric further from her body.
“Sweet Mother of God,” he whispered, his breath warm against her lower back and ass.
Posted by Bronwyn Green at 7:49 PM

I loved this book... especially his "unicorn"...

“Said the man with the bloodstained sword.” She drove her elbow into his stomach, feeling almost satisfied when he grunted

That contest sounds hard. Real hard. Harder than a unicorn horn in the hands on a greased up cover model.

But it's a good hard, Jennifer. wink wink. And this story is fabulous, me. Absolutely freakin' fabulous. I liked when he grabbed her but and got down on his knees with a declaration of awe. Every woman should have a sex god do that for her at least once.

Thanks guys - I heart you all big and much!