And I thought the 4th graders were bad... 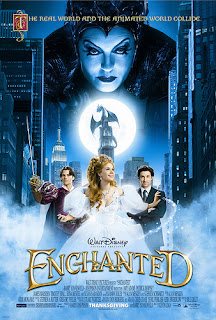 Yesterday was the 8th grade field trip. Instead of driving my son and three of his friends like I'd planned on, I got stuck with four girlies. I've been volunteering at my kids' school for several years, so I knew two of them well. The other two I didn't know at all, but they were both pretty nice. I'd apparently repressed how maniacally giggly 13 year old girls are. Yikes!
Now, I'm not going to pretend that I wasn't freakishly giddy at that age - hell, sometimes I'm still freakishly giddy. I had however forgotten the level of ear piercing shrieking that goes on with 13 year old girls. But that said, I had a great time with the chicklets. We went to see Enchanted with the other 65 or so kids, teachers and chaperones. Being so early in the morning on a school day we also had the theatre to ourselves.
The movie was absolutely delightful. I loved it. I'll admit, I'm a sucker for fairy tales, but I usually like the grittier ones. This was just adorable and fun all the way around. I'd like to take my younger son to see it. He, of course, would rather see Alvin and the Chipmunks, but I'd rather chew glass. I LOATHE Alvin and the Chipmunks.
Anyway, back to the field trip...after the movie and the subsequent squeeeeeeing by the girls and the eye rolling by the boys, we went out to lunch at Taco Bell where I ended up with my son and his friends after all. Later that night was the holiday band concert. Thank God I brought my knitting. Hubby's convinced it's the only thing that kept me from reaching out and smacking the drummer who couldn't keep time to save his life as well as grabbing the out of tune trumpet and tuning it for the poor child.
Well, I should chain myself back to the sewing machine so I can make a few more Christmas presents and return you to our regularly scheduled contest.
Do you want to win some fantastic holiday reading? If so come celebrate the Twelve days of Romance with 12 authors from Ellora's Cave, Wild Rose Press, Total-E-Bound and Cerridwen Press. Each day beginning December 8th and running through December 19th one of the twelve authors will tell what their "True love gave to them" on either their blog or website.Collect all twelve answers and e-mail them to mailto:anny@annycook.com with 12 days of Romance in the subject line to win some great books.
Deadline for answers is December 21st at midnight EST.There will be three lucky winners. The prizes –1st prize--6 books 2nd prize--4 books 3rd prize--2 books. All books and prize winners will be drawn randomly.
Anny Cook Winter Hearts
Sandra Cox Boji Stones
Bronwyn Green Ronan’s Grail
Heather Hiestand Cards Never Lie
Barbara Huffert Deal of a Lifetime
Amarinda Jones Mad About Mirabelle
Kelly Kirch Time for Love
Cindy Spencer Pape Cowboy’s Christmas Bride
Brynn Paulin FallenJacquéline Roth Access Denied
KZ Snow Mrs. Claws
Lacey Thorn Earth Moves
Posted by Bronwyn Green at 7:42 AM

My eye is twitching and I have an ice-cream-like headache just reading this. You are either incredibly good or insane(that would be my choice)to be doing this.

I'm glad I'm not the only one who has trouble with the beginning bands...I wince every time I hear a wrong note, and there's nothing worse than a rhythm section out of synch:)

It's just our musical ears, dear!

I saw previews for this movie. It's one I would like to see. Now I must decide between Depp or Dempsey. Not a contest, really, as Depp tops all. Especially if he could top me.

AJ, I'm imagining you right now with the 8th graders...I'm picturing you locking them all in the trunk of the car and leaving them there. Yes, insane would be the correct answer.

It's a good thing you weren't there Molly - it was brutal! lol

Hmmm...topped by Depp...Katie, I can so get on board with that comment!

Hey Bron. Sorry I missed the blog yesterday but I see you haven't posted to day, so all is not lost!! Mine's a flute player. She wanted drums and I said, oooo pretty flute, shiiiiiiney! It works beautifully. Never have to hear her unless she does a song for me.

I sooo want to see that movie. The critics hated it. All my friends loved it. Guess who I'm gonna believe?

Ohhh, I could so get into Dr. McDreamy in "Enchanted." You can all fight over Depp. I'd rather see Dempsey (on top, underneath, whatever! I'm sure it would all be good.

Naughty but then I'm not expecting anything from Santa any way. I understand he heard about Texas.