Who wants to win a book?

Anna Mayle, one of the most talented new writers I've read in some time, has got a new release out. And she'll be giving away a copy on my blog. All you need to do to enter is leave a comment in the comment section and a random winner will be drawn, Wednesday, July 6th.

So what are you waiting for? 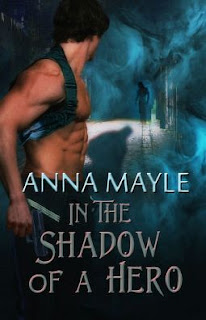 A cop dies in the city, life goes on. For one little boy, though, it changed everything. Haunted by his past, Maxwell Thomas has grown up homeless and friendless, trapped by his guilt. Prowling the city, the small man guards the Church District like a vigilante, trying to make up for his crime. When he rescues the wrong rent boy, he is pulled back into the madness that destroyed him as a child. And now, another cop's life is on the line...

Nick Kenna is a beat cop with dreams of being a detective. When he stumbles across a murder and the very unusual suspect, he finds himself caught, not only by the mystery of the vagrant he's apprehended, but something deeper that sparks between them.

Will Nick be able to save Maxwell, from his past and himself? Or will love be lost as the broken man fades into the shadow of his hero?

Midnight, in a city that no longer slept. The frosty chill that crept in with the autumn evening helped to dull the acrid smell of humanity, but not by much. A subtle hint of clean air didn’t seem like a decent trade-off for the noise that accompanied the world while the sun hid its face. After dark, the pall that settled over the city went beyond the usual sounds of cars and conversation.

A small, grime-encrusted figure crouched in the shadow cast by a crumbling building, watching as if in mourning. Long red hair, matted and dirty with the stink of the street, framed a face nearly as dark as the shadows, deep sienna skin blending with the night. He hated his hair, so bright in a place that shunned color and light. It set him apart from the pain around him, sacrilegious, like wearing red to a funeral. He might as well have been; the city was dying. Its death cries were carried on the concussive sound of a firing gun and the cries of a drug addict in the throes of a bad trip. The violent, dulled crunching of bones breaking under another man’s fist competed with the calls of the street walkers selling their wares, selling themselves.

The keening wail of a loud engine and booming stereo that screeched around the corner and past his resting place broke his musings. The thrumming base vibrated through the concrete beneath the worn out soles of his boots. A growling, hoarse voice bellowed, “I don’t give a fuck!” the unspoken anthem of the streets. No one cared that no one cared. It became a damning cycle of apathy. The man in the darkness shook his head, tried to stop himself from thinking. He had known someone who cared once. That person had died young. It was what happened eventually, when you cared too much.

The man long dead once told him, “if we can inspire one person to concern themselves with the well-being of others, then we have lived a rich life.” The watcher blinked then closed his eyes tightly. That caring person had been killed by the very rag-wrapped hands the redhead now fisted at his sides. Guess he failed.

Then again, he’d been plagued since that day, by moments when he forgot to act like an intelligent person. Times he stuck his neck out for others. Sometimes a voice deep inside of him told him he had no other choice but to react, to protect people. The same people who looked down on him sneered and spit; people who would never mourn or even notice his eventual passing or pain. That man was probably laughing his ass off in whatever afterlife he’d gone to.

He had no choice left to him. Not anymore. He’d come to terms with that long ago. He had inherited his duty from his victim. The city had become his to protect in the absence of its original savior. It remained his life, both joy and burden. He’d been born in the city. He would die there, accompanied by one of those grotesque night sounds.

A chill that had little to do with the weather filled the dirt-coated man, and he stood, moving on. A dark alley waited ahead of him, one he knew well. He slipped toward it, brushing past the hookers blocking his way. They didn’t bother to proposition him anymore. It might have been the smell. He slipped out of the mob of people, using a trash can to boost himself. A good jump propelled his little body upward enough to catch a decent hold and scramble onto the metal bars of a fire escape. It stood above the dirt and din, and the window near it wasn’t sealed properly, so a slight warmth misted out into the chill night. Any port in a sinking city.

Labels: Anna Mayle, In the Shadow of a Hero

My hubby is an officer :) I love to read about them as well- this sounds like its going to be a very good book. I am always on the look out for new authors as well :) - Thanks

This sounds amazing; I can't wait to read it.

I'm not entering because I've already read it and loved it. :)

Oh this does sound good. A new author to add to the list.

I would love to win this book ^.^ It sounds amazing.

^_^ Thank you all so much for your interest! Getting comments from so many wonderful readers just makes my day.

The story looks intriguing and with good reviews as well. Would like to try my luck here

As if my to be read pile needed another book. I can't help adding to it when they sound like as much fun as this one does.

Sounds like a good book :-) Would love to win it!

This sounds like it will be an amazing read!!

Sounds like a great book! And I LOVE the cover!

Oh, sounds amazing and painful and complex! Win or lose I'm grabbing myself a copy of this!