The annoying and the cool

Corwin, my youngest, has been assigned the leaf project of doom. Apparently, there are thirty-three trees that are indigenous to Michigan, and he has to find leaves from twenty-two of them. He and I spent last Sunday wandering around a local college campus, and we found most of them. We still have at least three leaves to track down, though.

This is the tree he insisted was watching me... 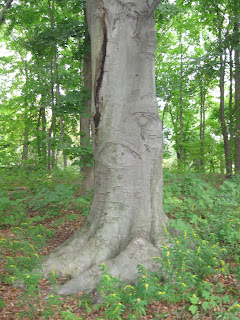 Last night, we sat at the kitchen table for hours, me helping him identify and him mounting the leaves and doing the write up on each one. Unfortunately, as a result of our leaf togetherness time, we both ended up with runny eyes and noses, sneezing and asthma attacks. After the doses of benedryl, singular and nebulizer treatments for both of us and hydrocortizone for my stupid hives, we've got fourteen leaves done and eight to go.

Nothing says togetherness like group allergy attacks. But we had fun. Particularly when the kittens tried to help... I'm not gonna lie. I'll be glad when it's done. The Charles Darwin project seems much less allergy inducing.

Today, my cousin and I were going through the drive-through at Starbucks, because I needed caffeine to face my day. It's a quad shot kinda day. Anyway, we reached the window, and I tried to hand the cashier my card and she told me it was already paid for. I was slow on the uptake, so she had to explain it again. Apparently, the lady in front of me decided she was going to perform a random act of kindness and paid for our order!

I've heard of people doing things like that, but I've never had it happen. It was freaking cool! So thank you random lady in the big, black SUV. My coffee was super awesome, and next time, I'll be buying coffee for the person behind me!

What a nice start to the day!
Posted by Bronwyn Green at 7:55 AM

Aw, that was really cool of the lady in line ahead of you!! Talk about a random happy.

Sorry to hear about the group allergy attacks.

How cool..nice way to start the day.
Sory about the allergy attacks. Hope the project is over soon.

You should tell the teacher about all the shit you had to go through to get the leaves. Maybe she'd be less likely to assign homework that had, you know, medical consequences for people if she thought about it for two seconds.

What a great leaf story. I'm sorry about your allergies and yes, he's right, the tree was watching you but not necessarily in a bad way.
Yes, buy coffee for someone. Two highway patrol officers out in Maryland helped my daughter when her car plowed into a snowbank during a blizzard, so when I was in line at Starbucks and four CHP officers were behind me, I bought them coffee. Even though they weren't the same guys, obviously, it made me feel good to thank them.

I agree with Jennifer. The teacher must know of the allergy attacks. Also, I just love these assignments that the child can't possibly do without a parent. Grrrr.