I can't believe I've been home from the Authors After Dark conference for a week and this is the first time I've been able to blog. The day job sort of exploded upon my return, so now I'm trying to get time sensitive projects put to bed so I can get back to writing.

But, I'll do a brief recap. As always, the best part of conference is spending time with my awesometastic friends. Brynn Paulin and I flew out on the 15th, met up with Mia Watts and Carol Lynne at the airport. We made our way back to the hotel, got our stuff dragged up to the rooms and then waited for Kris Norris. And waited. Hit the bar. And waited. Sent Mia's terribad drink back. And waited. Our favorite Canadian girl had some transportation issues.

But she finally arrived and I was soooooooooooooooooo happy. I've been waiting to meet her in person for well over a year which is a long freaking time in internet time. If you're talking online to someone almost every day and on phone a lot, a year is a longass time to wait to meet. You know how sometimes you meet people in person that you've only corresponded with and it's weird and awkward? Meeting Kris in person was the polar opposite of that. We all loved her - how can you not? And it was like she'd been in our circle of friends forever. It was the same way when I met Mia and Carol. Instant awesomeness.

But I digress, after Kris got there, we all went out for supper and then collapsed in our hotel room because the next day was our awesome trip to New York. Brynn, her husband and I went a few years ago and had an amazing time, so I was thrilled to go back. We hit the usual spots, Times Square, Battery Park, Central Park, the Staten Island Ferry to see the Statue of Liberty, accidentally rode the subway to the Bronx - which ended up being perfect timing because a huge thunderstorm blew in, but we were able to wait it out on the train. There was lots of people watching to be had - the bitch who felt it was her public duty to publicly mock overweight people, the adorable nerdy guy running his lines for a show (I hope you got the part, dude!) and the homeless man hiding under a hoodie who broke our hearts. Mia, very sweetly, left her granola bars with him.

I think my favorite parts of the day were the carriage ride around Central Park and the ferry ride back to New York where we met a sweet and very funny guy named Jose - nickname, Joey - pronounced Hoe-y. Joey was hilarious and we had a fantastic time laughing our asses off all the way back to the dock.

It was after ten by the time we finally got back to New Jersey. We went out to supper and apparently, I fell asleep at the table. I don't remember this, but Brynn insists that I did, and I believe her. I was soooooooo tired - we all were. Mia, Kris and I went back up to our room to find Jennifer Armintrout collapsed on of the beds and delirious with exhaustion. Poor baby had her plane diverted to Allentown, PA where she sat on the runway for three hours.

Friday was the official beginning of the conference. I only went to a couple panels - mostly because I was too busy talking to people. But I met some fantastic writers and readers. At the supper where Mia had her close encounter with the sex therapist, we briefly met Soyna Bateman. We got to know her better the next day and discovered that she's amazing. She's smart, funny and just an all around great person. She writes urban fantasy and mm. My husband keeps threatening to take the UF book away from me. I keep telling him that I get to read it first, so hands off. However, if I continue to be swamped, I might have to give in.

The book signing on Saturday was great. Got to sit between Brynn and Jen and Sonya was kitty corner to us, so lots of fun was had. After the book signing, Brynn, Kris, Mia and I had our suite party. We gave away a sony e-reader, 20 ebooks, 10 signed print books and plenty of swag. All things considered, I think it went quite well. A lovely couple from Canada won the grand prize and everyone else went home with a print book.

With a few exceptions, it was a fantastic conference. I can't wait to go next year!

These are just a few of my favorite pictures from the trip. This is a gorgeous mosaic in one of the subways. 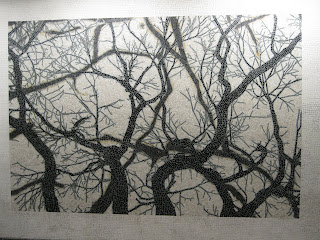 This is the John Lennon memorial in Central Park. 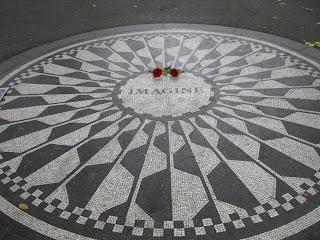 I don't know what this building is, but it overlooks Ground Zero. I got chills when I noticed what was in the windows. Using religious symbols, it says: Coexist. (C
lick on the photo to embiggen.) 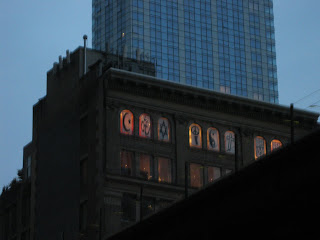 A view of the city from the Staten Island Ferry. 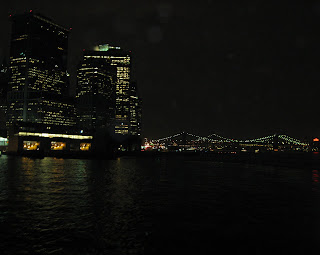 The adorable Stella Price all dressed up for the 'come as your favorite literary character' party. 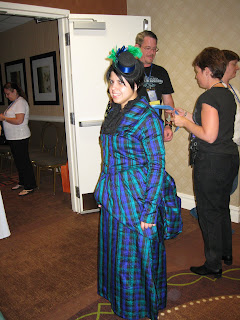 The lovely Jennifer Armintrout dressed as the Scarlet Pimpernel's wife...whose name escapes me. 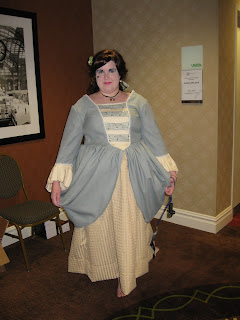 The fantastic Leanna Renee Hieber dressed as her character, Percy Parker. This costume was amazing! 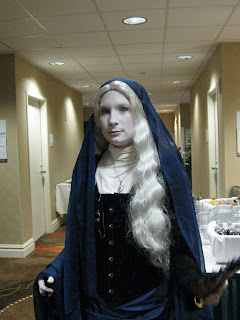 Our contest winners, Dave and Peggy celebrating at the party. 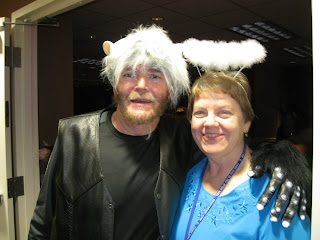 Posted by Bronwyn Green at 8:56 AM

Amaaaaazing! I'm so glad you all had a good time! And I love your photos! You know you could have a second or third career in photography if you wanted! Yum!

I was wondering what C-lick was. I didn't think you actually wanted me to swipe my tongue across the screen, but with you...that's always a possibility. :)

Yeah we had such a great time. I loved just about everyone we met there and am so glad to come away with yet another friend, Sonya.

PS. I don't remember you falling asleep at the table. I DO remember convincing you to hold up those GIANT fried balls and licking them for a pic. Heh. Those were some awesome tasting balls.

Awwww, I'm jealous. Wish I could have been with you guys. Sounds like a fabulous trip!

Glad you had an awesome time!!!

It was so fantastic meeting you guys! I truly can't wait for next year. Now that I know you, we can hang out for more than the last day. *G*

How did I miss this post? I'll tell you how... my freaking day job is sucking not only my soul, but those of the people around me. It's like a giant vortex.

anyway, yeah, it was a great time. You guys are awesome and just gave me more reasons to love ya. Sonya, you rock. I can't wait to see you at the next one. I love those pics...funny how I have the same ones, lol. Yeah, I was the only person who went to New York and forgot their camera was in their other bag.

Can't wait to hang out again... guess it's back to cyber-stalking.

I too am jealous and wish I'd been there, but I'm glad you had a blast. And the photos are great!

@ Julia - awwww, thanks! I do enjoy taking pictures. Much better than being in them!

@ Chris - actually, you were one of the people I thought of when I saw those windows. :)

@ Mia - I don't remember posing with fried balls, and if there is such a picture, I trust you'll destroy it!

@ Regina - I wish you could have come with us, too! It was a blast! You should come next year!

@ Sonya - you'd better hang around for longer than that, little missy!

@ Kris - if it's any consolation, I'm swirling in that same vortex, babe!

@ Simone - thanks! I definitely recommend this conference!