Immortal Curse is out today! 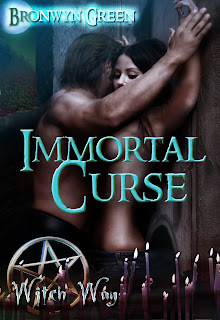 I'm happy to announce that my fifth release with Resplendence Publishing is out today! Immortal Curse is the first book in the Witch Way series with more to follow later this year. And it's my fourteenth release overall, which all things considered, is pretty damn good!

And I'm being interviewed over at the Salt Lake City Examiner - please stop by and leave a comment so I'm not all lonely and stuff. :)

Cursed by a witch, Ian O’Meara has been trapped between the world of the living and the spirit realm for the last hundred and fifty years. Annoyed by having his eternity interrupted by amateur ghost hunters, he reaches through the veil to Emma Boulton knowing she can see and hear him even if the others can’t. When he discovers she can also feel him, he decides Emma is the most exciting thing to happen to him in the last century. Suddenly, escaping his miserable curse isn't quite so appealing.

Much to her dismay, Emma has been able to see ghosts ever since she was a child. Most of the time she ignores them, but Ian makes that all but impossible. With his dark, good looks and his brooding personality, he’s a gothic novel hero come to life...so to speak. She knows she should help him toward the light, but the only place he seems to be interested in is her bed. Falling in love with the charming spirit is all too easy, but is a future together possible between the living and the dead?

Emma Boulton let herself sink beneath the surface of the steaming water, hoping the heat of the bath would ease the tension from her neck and shoulders. On a good day, teaching high school level English was difficult. On a day like today, it was hell on earth.

Amber, one of her students, was back in school after having missed several days to attend her grandmother’s funeral. Unfortunately, the spirit of said grandmother decided to come to class with Amber. Once the old woman had figured out Emma could see her, she’d spent the entire day in her room, throwing markers, fiddling with the window blinds and dropping books.

Only one student had caught sight of the spirit, but she’d wisely put her head down and closed her eyes. Normally, not paying attention in class was an instant detention, but Emma wasn’t about to send her to the principal’s office. Hell, if she could have gotten away with putting her head down on the desk and ignoring it, she would have done the same thing. It wasn’t that she was afraid of ghosts, per se. But they were dead and the dead belonged on the other side—instead of staying here and throwing spit wads at the living.
Emma had stayed until even the cleaning crew had left the building and tried to convince Amber’s grandmother to move on. It had taken several long hours, but eventually the old woman crossed over.

Gripping the rim of the claw-foot tub, Emma pulled herself up to the surface and wiped the water from her eyes. She opened them, and a scream caught in her chest. A tall and decidedly transparent man leaned against her sink.

Dressed as he was in a black suit, complete with a long frock coat, he looked like an antique photograph come to life. Shaggy, dark brown hair drooped across his forehead, and he pushed it aside. Deep blue eyes watched her intently.

“For fuck’s sake,” she was finally able to mutter.

She grabbed a towel and quickly stood to wrap it around herself. Pointing at the door, she said, “Out. Out of my bathroom. Out of my house. Out of this plane of existence, already.”

A dark eyebrow rose. “I’d love to. Really, I would.” An Irish accent colored his words, and his deep voice wrapped her in tingling warmth. “However, I’m not leaving until you convince your harridan of a sister and her equally obnoxious companion to leave.”

“Your sister.” He spoke slowly as though he thought she were an idiot. “Is in my schoolhouse. With her friend—the girl with red hair. They’re not listening.”

Realization sank like a stone in her stomach. “The abandoned schoolhouse on eighty-fourth street.”

She was going to kill Meaghan. And her friend, Rowan. She’d told them time and time again to stay away from there, but they didn’t listen. Now, she had to deal with a pissed off ghost.

“Look, I’m sorry they disturbed you, but they really don’t mean any harm.”

She sighed. Meaghan wanted nothing more than to see the same spirits Emma did, but it wasn’t where her gift lay. She was a seer—not a medium. Of course, Emma heartily wished she wasn’t a medium at the moment.

Tightening the towel around herself, she walked past the apparition. Just as she was about to pass through the bathroom door, he moved in front of her, simply appearing there in that annoying way ghosts had. Her next step carried her directly through his body, but instead of the icy cold that normally accompanied spirit contact, her body flushed with heat. She whirled to look at him, her surprise mirrored perfectly on his face.

“I can feel you,” he whispered, sounding as shaken as she felt.
Posted by Bronwyn Green at 12:34 AM

Woohoo!! Congrats on the release, Bron! It sounds like a great read and the cover is awesome! I love it! :D

Thanks everybody - you all rock!!!

Hugs all around :D

Sorry I'm late dropping by. Congrats on the new release. And can I say... OMFG this book is Awesomeness!!!

I've already devoured, yes devoured it and it totally rocked. You are now my ghosty queen. Can't wait for the next one.

woo-hoo! so am gonna get this one!