A Crafty Christmas at the Green House 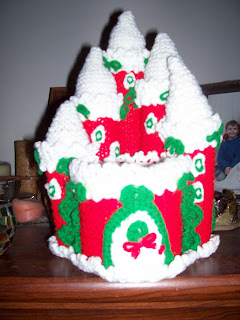 We had a party at my Mom's on Saturday and it was a blast. All three of my brothers, my sister, my sister-in-laws and my nieces and nephew were there. My boys had a riot having a Nerf war with their cousin and uncle. There was hiding behind cabinets and furniture, diving rolls across the floor. Walking between them was like being trapped in an action movie.

On Sunday, we went to my Dad and Stepmom's place for another party. It was fun, but the roads were awful. A one hour drive turned into two because of all of the ice, wind, drifting snow and whiteouts. But everyone made it there and back - safe and sound.

Unfortunately, I now have the plague - a holiday gift from one of my daycare kids. So in lieu of thinking coherently, I thought I'd share some pictures of holiday craftiness from the Green home.

The picture up above is a Christmas castle that my Gram knitted for me the year I got married. She'd made one for each of my aunts and uncles the previous year and she'd planned on making one for each of the grandkids as they got married. Unfortunately, I was the only one to ever get one because she died before the following Christmas. It's one of my most treasured possessions.

These are our stockings hanging on the living room archway...along with various masks and mobiles. There are closeups below. 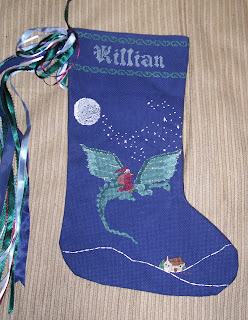 Here's Killian's stocking. In case, it's difficult to make out, it's Santa riding a dragon. I'm pretty proud of these since I made up the patterns as I was going along. 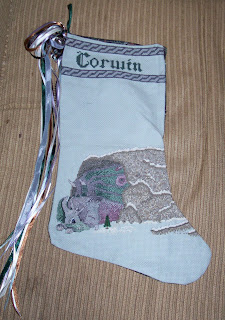 his is Corwin's - a dragon peering out of his cave at his little Christmas tree. 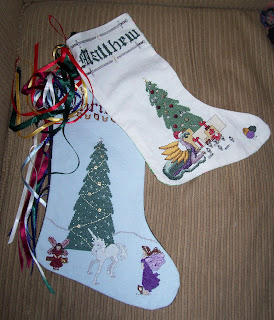 These are mine and Matt's. I made them the first year we were married. I'd just learned to cross stitch the year before and was a rabid addict. Matt's is a dragon sitting by his gifts (there are little knights in the foreground) and mine has faeries and a unicorn...cause, yeah...I'm a nerd like that. 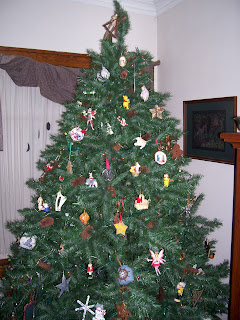 And last but not least - this is our tree. It's a hodgepodge tree of ornaments the boys made when they were younger, faeries, dragons, castles, moons, stars and lots of Winnie the Pooh - both Classic and Disney. I love me some Pooh Bear.

Well, that's it for the crafty Christmas tour. I'm off to make some tea and cwtch up under a blanket and maybe take a nap. I hope everyone who celebrates has a wonderful holiday and that those that don't have a lovely time as well.

Posted by Bronwyn Green at 7:26 AM

Have a wonderful Christmas... Rita and I already had the plague. So I can tell you it lasts about four days!

Merry Christmas, Bron:) Hubby's taking the boys and disappearing for several hours so I can get the rest wrapped!

The castle is a beautiful memory of your Gram - I'm not at all surprised you treasure it.

Have a great Christmas and get well soon.

The castle is beautiful. The stockings are fantastic. Great work. I hope you feel better soon. Love the mouse hanging out in the star on your tree. Happy Holidays. Get better soon.

You are so talented. I love looking at your photos. Happy Holidays, girlfriend. Wish I could hug you and tell you that in person.

Merry Christmas to the family, including the adorable nerdy ones. :)

Those stockings are awesome. Great pics!

I found your blog through Barbara Huffert's blog. I like what I see here. Please visit my blog when you get a chance: jjhebertblog.com

I LOVE the stockings. You are so talented. The package is in the mail:)
Happy Holidays, Bron.

The stockings are always so fun to look at. I think it's wonderful that you've made them for everyone -- much more crafty than me :-)

oh my god.. it is all so lovely.. the tree, the stockings, the knitted castle.. u have such a blessed family and blissful life.. i think its not too late for me to wish u this.. merry christmas.. and of course.. happy new year!!!