There must be something in the water. A lot of women I know are either pregnant or just had babies. (Happily, I remain immune.) Most recently, the fabulous Jennifer Armintrout gave birth, and in her and her baby's honor, I'm blogging about childrens books. Girly books, in particular.
When I was a kid, books with strong female protagonists weren't as plentiful as they are today. I loved fairy tales, but I was always disappointed because the princesses never seemed to do much to change their unfortunate situations, they mostly waited around for someone to do it for them. Of course, these were the watered down versions they gave kids in the 70s - as I got older, I discovered that the orginal versions were much more to my liking, but I digress.
One year, my Great-Grandma Green sent me a collection of fairy tales from Wales. At the time, I remember thinking that I was getting a bit old for a picture book, but I sat down and read it anyway and I was thrilled. In the collection was a tale I'd never heard and it was my first introduction to a heroine who was strong and willing to fight and sacrifice for what she wanted. The character's name was Gerda and the story is The Snow Queen by Hans Christian Anderson.
My scanner is misbehaving, so I can't show you the actual book, but I can show you a newer version illustrated by one of my favorite artists. 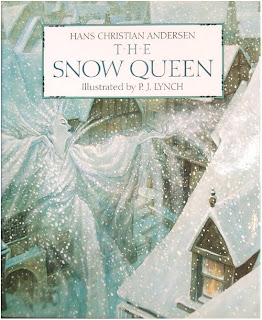 Another great book featuring a butt kicking female character is Wild Robin by Susan Jeffers. this fairy tale is loose combination of my three all time favorite tales, Tam Lin, The Snow Queen and The Wild Swans. Robin was a wild boy and much to the annoyance of his older sister, Janet, he refused to do his share of the chores at their family farm. He runs away and falls in with the Queen of the Fairies and it's up to Janet to save him. 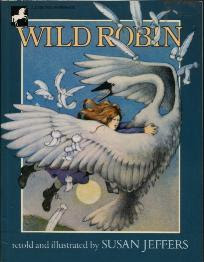 The Paper Bag Princess is on my top ten list of favorite books of all time. Elizabeth is a typical princess in love with a prince named Ronald - unfortunately a dragon smashes her castle and carries off Prince Ronald leaving Elizabeth with nothing more than a paper bag. She puts on the paper bag and goes after the dragon to get Ronald back...only Ronald isn't quite who she thought he was.
When my sister Cait was in preschool, I was her "special person" and got to hang out with her in class. At the end of the day, I read some books to the class. Cait insisted that I absolutely had to read Gypsy Girl's Best Shoes and The Paper Bag Princess, so of course, I did. I remember at the end of the story, the majority of the kids sat there looking at me with puzzled expressions on their sweet little faces while Cait was crowing, "Doya get it? Doya get it? They didn't get married after all!" while Cait's teacher just stood there quietly shaking her head. 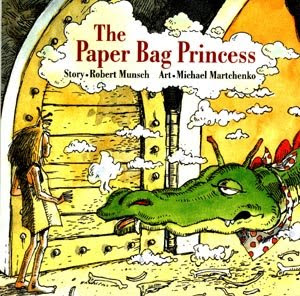 The Wild Swans is another hans Christian Andersen tale that I adore. It's the story of a young princess and her eleven brothers who are cursed by their evil (of course) step mother. The boys are trapped in the bodies of swans by day returning to their human form at night. Their sister discovers the only way she can free them is to silently knit them all swears from stinging nettles. If she speaks, the spell will be fixed and they'll be forever trapped as swans. Unfortunately, she gets tried as a witch and will not speak in her defense in order to protect her brothers. 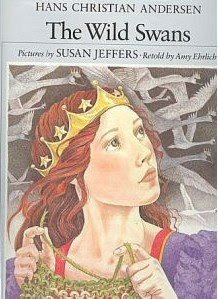 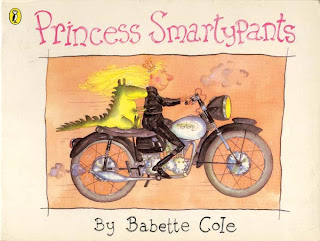 Noble-Hearted Kate is another book in my top ten. It's based on the fairy tale, Tam Lin. Kate and her beloved stepsister, Meghan, (gotta love a book where the step families aren't trying to curse one another) wake up one morning to find that Meghan has been enchanted by a wicked fairy and now has the head of a ram. Meghan is understandably distraught and Kate comes to her rescue, bravely battling and outwitting the fairy queen to free Meghan and also a prince that comes to be Kate's true love. 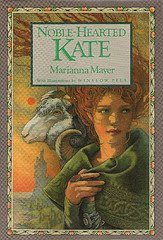 Some of these books may be out of print, but well worth the search, if you're so inclined. So, what were your favorite books when you were a kid? Are there any books you'd add to this list of stories with strong heroines? I'm always in the market for a new book. :)
Posted by Bronwyn Green at 6:32 PM

I have to read a book for my one-act that I'm in. It's Faulkner's The Sound and The Fury.
I hate Faulkner.
My director told me to get excited about a different book, then.
I gleefully replayed Gypsy Girl's Best Shoes in my mind (yes, I've memorized it)and couldn't help but think of you, and your wonderful reading voice.
It made me miss my big sister a lot.
I'm thinking I might make you cwtch up on the couch and read to me while I'm home for Thanksgiving - it's been that kind of semester.

About the Wild Swans thing. She knits them all "swears" from stinging nettles? You have to knit them? My swears just fall right out of my mouth. Maybe I'd be more eloquent if I stitched them up a little.

But seriously, great collection. I second the vote for The Paper Bag Princess. Best. Story. Ever.

Jim C. Hines is rewriting all the classic fairy tales with kick-butt heroines. They are sort of the Charlie's Angels of princesses. They are YA. The first one, The Stepsister Scheme, comes out in January. I can't wait.

I loved the Wild Swans too! I was thinking of that story a couple of weeks ago, but couldn't remember the title. Thank you!

I also loved The Snow Queen:)

Congrats to Jen and family!

I loved Sister Madge’s Book of Nuns, by Doug MacLeod especially the story about the nun with a pet vulture - totally hysterical.
Helen

Great blog. Looks like you picked the keepers.
Have a wondrous evening, Ms. Bron.

SAdly I missed all of those, but now I know what to get Bug. They sound great and now I must know how they all end and begin.

The Paperbag Princess is our all time favorite too!!! Love that book. :) Most times if I mention it, no one knows what I'm talking about. I should have known you would.

Hey Bron...I nominated you for the 'I Love Your Blog' award.