I’ve been a bad, bad blogger. I don’t have a good excuse. Mostly, I’ve been depressed. So much so that I couldn't even blog about it on Brynn's blog on Monday. Yes, I know...pathetic. I’m never really a happy camper this time of year, but this year is worse than ever. I think it’s because it seems like winter will never end. The snow is endless and the temperatures are bitterly cold. For instance…right now it’s 5 degrees outside. On the plus side, the sun was out for a little while yesterday and it’s out right now which makes me feel slightly less morose. For the record, T.S. Elliot was high. April isn’t the cruelest month, it’s clearly February. Although I do still like that poem.

Usually at this time of year, I get to do one of my favorite things which is to play with clay. I love creating something from nothing, which I guess is one of the reasons I like writing so much. Unfortunately, I haven’t been doing either one lately. There’s no pottery in my future since I don’t have access to a kiln right now, but there will (hopefully) be new stories soon.

In the meanwhile, I thought I’d take some pictures of some things I’ve made during previous winters as inspiration for me to get off my butt and do something besides being a morose lump. 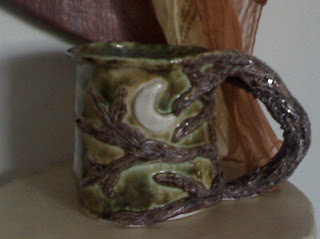 This is my favorite tea mug. Well...I suppose it's really more of a vat, but it keeps my tea hot, and it's comfortable to hold and drink from. 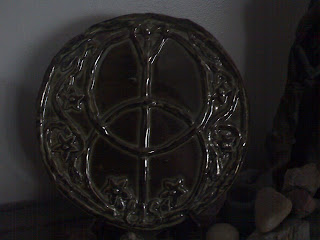 This one turned out a little dark, but it's my version of the cover of the Chalice Well at Glastonbury. 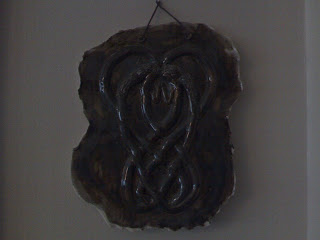 This is a little dark too, but it's a Celtic knot piece I made in honor of my relationship with my sister Caitlin. 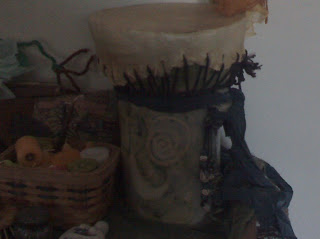 This is one of my drums...and the only one I made. But it's got a decent sound and it's the first instrument I ever made that didn't involve rubberbands. 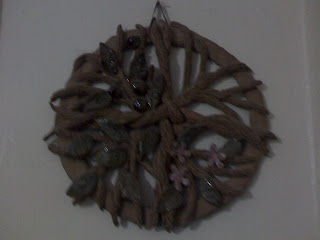 Despite my recent, incessant bitching about winter, I really do enjoy all four seasons. This piece hangs in my living room and it's one of my all time favorites. 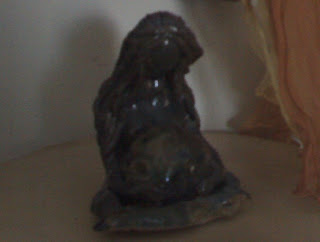 This one is much better in person. It's an "Earth Mama" and it's glazed in really cool blues and greens.
Posted by Bronwyn Green at 7:43 AM

This has been the never ending winter, hasn't it?

The absolute worst times are when it is literally too cold for the children to play outside. The school keeps them indoors for recess so their little noses won't get frostbite, and then sends them home all crazy with energy. Nobody likes that at all.

Pottery is something I so want to try sometime. My cousin (FOUR days younger than me) is taking an advanced pottery course in college. Waaaaa!

You're stuff is lovely. Girl get a sun lamp--please! I got mine at Sam's Club for $20 and it's been a life saver!

Oh, yeah! Anyone suffering the winter blues should have their Vitamin D level checked. Very important!

OMG - ANNY!!!! You're a bloody genius!!!! I've been off my vitamins (including my extra vitamin D) for about a month now because my "pill schedule" got all wonky with the kidney meds and I totally forgot about trying to work them back in...DUH! Thank you, Anny. I'll also go to Sams's tomorrow and see about a sun lamp.

BTW - community education classes are the best way to play with clay for cheap!

I am so jealous. I was terrible, ghastly, horrible at pottery. I particuarly like the celtic stuff. Do you ever think of selling it?

I love your pieces. That mug is especially wonderful. I have no artistic abilities so I really admire anyone who can create.

I still have the fairy you made me. And the candle holder.
Get thee to the sun, girl.

I teased Barb about shooting that groundhog...could they not have brought him out in the SHADE?

Sorry to hear you've been depressed. I suffer with it, too, but as long as I have my Wellbutrin, I'm pretty good.

Cool pottery. I used to do ceramics, but my favorite part was playing with the clay, making cut outs and adding clay onto the shapes. I never did actual pottery, but if I ever got back into it (if I ever get time - maybe after I retire from the day job in 20 or so years), I'll get my chance.