So...I was checking out my website stats the other day and I found that someone has searched for me with the phrase, "author Bronwyn Green will remove her jeans." Really? Well...I supose...if I have to pee. Bizarre...yet pretty freaking funny.

Yesterday, I spent the day at my mom's. We had a big turkey dinner with all of the fam - except one of my brothers who was sick. After supper, my sister brought out a game she'd bought for the occasion. It's called Apples to Apples, and it's bloody hilarious! It's a simple premise, each player is given seven cards with random nouns, both common and proper. After everyone has their cards, a judge is picked and an adjective card is revealed. You have to put down the noun you think the adjective best describes. Everyone gets a chance to judge and if your noun is picked, you get a point. The one with the most points wins. 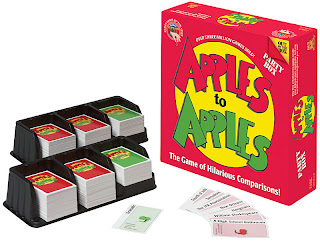 Now, I realize that sounds like it could be dull, but if you're going for irony or straight-up silly, it's the best game in the world. We must have played for three hours straight, laughing hysterically the whole time. My brothers, sister and sister-in-laws are so freaking funny. I ended up with a headache from laughing so hard - but it was worth it. My sister's partner won. I think her mutant ability is either mindreading or she just knows us so well that she knows what we're going to find hysterical. If you haven't tried this game, I highly recommend it.
Posted by Bronwyn Green at 8:51 AM

Oh, we'll have to try this one. We're always looking for new games that ARE NOT MONOPOLY.

I wonder what else you are listed under as removing?

"author Bronwyn Green will remove her jeans" LMAO! Holy crap I actually snorted when I read that.

Every time you guys talk about the crazy searches people find you under I want to google you and type in weird ass stuff, find your sites, and click through. Just so you can wonder things like "Who the hell wondered what is Bronwyn Green's obsession with Swiss Cheese? I don't even HAVE an obsession with swiss cheese."

Someone found my site with "swimming pool bondage"... though my favorite so far was "how to dress like a gunslinger".

I gotta get that game.
Oh and, keep those jeans on, girlfriend:) grin.
Sandra

I love this game!!

You'd have to WEAR jeans in order to remove them...

Don't you wear jeans, Ms. Me? I thought we were more alike than that and I'm rarely without denim.

And how unfair of you to keep some of those hilarious comments to yourself. Do share!