Merlin Club: The Eye of the Phoenix or The One Where Two Beloved 80s Movies Collide

Okay my loves, this post is going to be considerably shorter than usual, because I’m the Plague Maiden. And mostly all I can do is cough and sleep.

Okay, so Arthur goes on what’s basically a vision quest so he can figure out what quest he has to fulfill in order to be worthy of succeeding Uther. After spending the night on his knees he knows that he has to travel through the Perilous Lands to the kingdom of the Fisher King and retrieve his trident all by his lonesome as proof that he’s awesome and king-worthy. 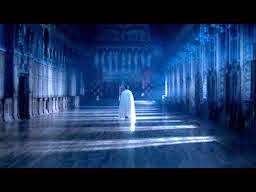 So Gaius tells Merlin that it’s super dangerous for Arthur to do this. That no one has emerged from the Perilous Lands alive. Merlin decides that even though Arthur is supposed to perform the quest alone, he’s going to follow him.

Meanwhile, Morgana meets up with Morgause who’s disguised as an old woman in the town market.  They’ve devised a new plot to kill Arthur.  Morgause gives Morgana a bracelet and tells her to enchant it with the spell she taught her. Gwen, who was at the market with Morgana, is way suspicious. 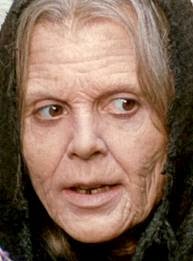 That night, Morgana casts her spell on the bracelet and gives it to Arthur in the morning. He blithely rides to the border of Perilous Lands. In order to enter them, he has to cross a bridge and the bridge keeper is WILLOW!!! Anyway, Willow, who’s called something else in this episode, tells him that he’s courage, but he’ll need strength and magic in order to fulfill his quest. Arthur, rather disdainfully, tells him that he doesn’t condone the use of magic. And Willow tells him to suck it up, the rules are different here. 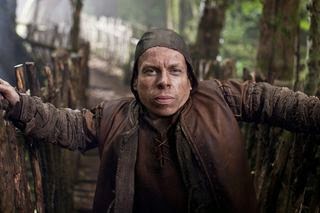 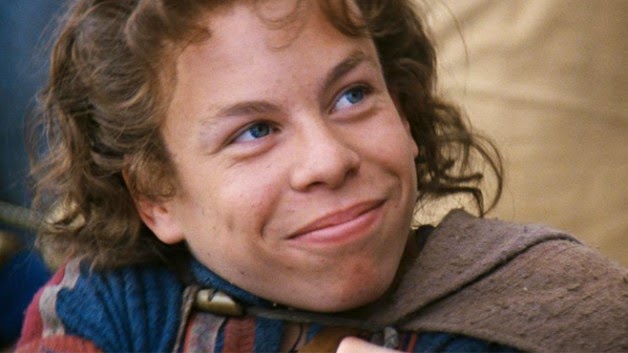 So Arthur crosses the rickety bridge and enters a barren wasteland. The magically enchanted bracelet of doom is sapping his strength and he nearly drowns in quicksand just like Artax in The Sad Horse Movie aka The Neverending Story. But Arthur makes it out and continues his struggles. 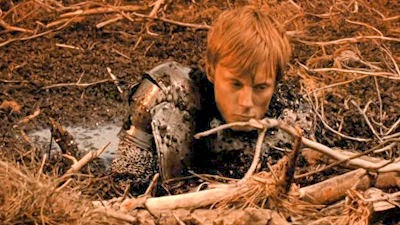 Here...Have some sad horse pictures from the movie that ruined your childhood. I'll wait...while you weep.

Merlin hits up every tavern until he finds what he’s looking for. Which is Gwaine. They escape a beating to some jaunty background music. It seems Gwaine cheated some dudes and they wanted their money. Gwaine agrees to help, but he makes it clear that he’s helping Merlin rather than Arthur.

Back at Camelot, Morgana’s behavior toward Gwen has been questionable. So Gwen hides in her room and observes her practicing magic. When Gwen’s able, she goes to Gaius and tells him what she’s seen. 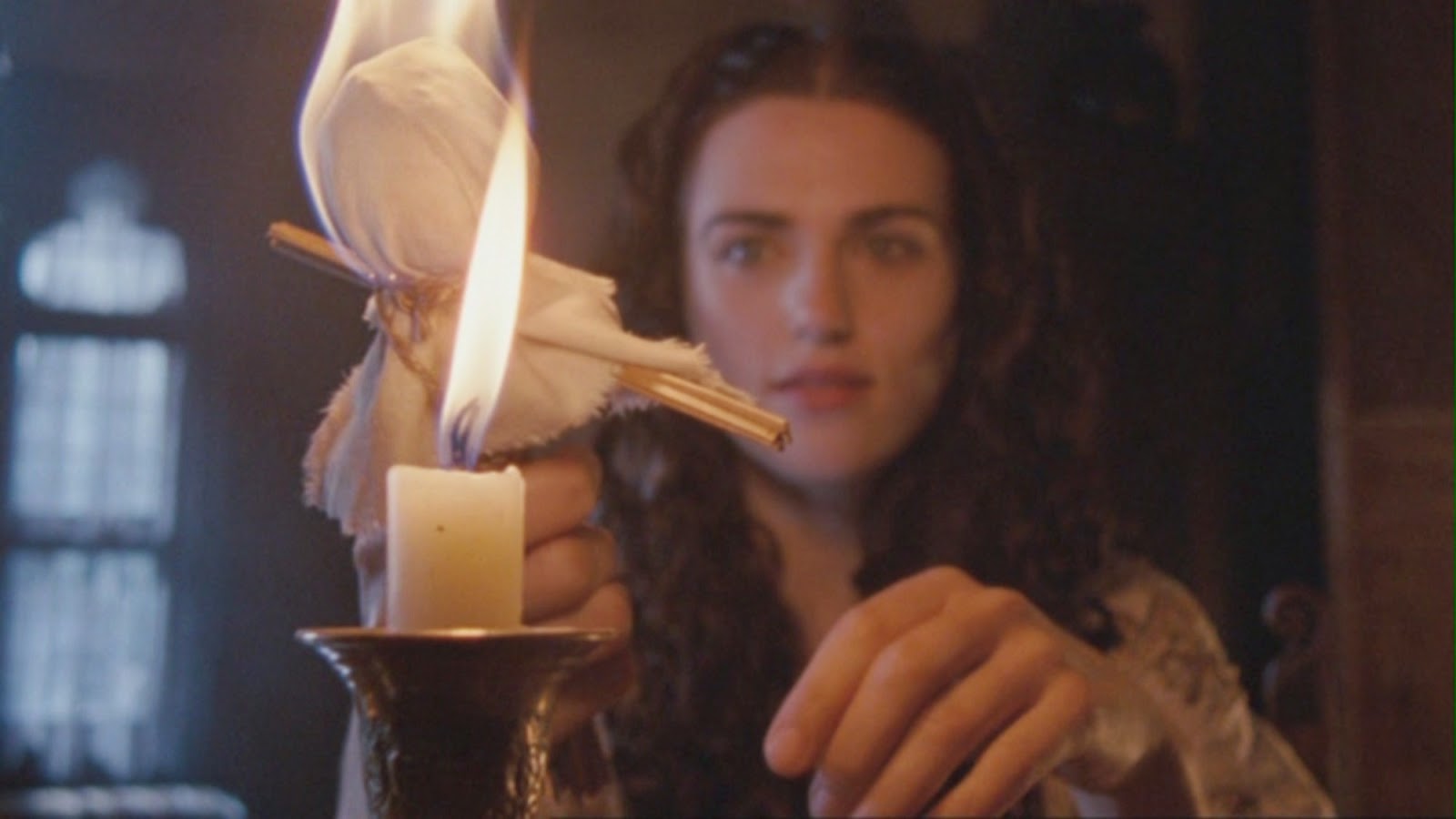 Merlin and Gwaine reach to the bridge and meet Willow. He says that magic and strength have arrived. Merlin tries to deny it, but Willow is all, this is your quest not Arthur’s (which is frankly kind of not cool) and lets them pass after turning Gwaine’s sword into to some cheap looking Easter lilies. (It changes back after he crosses the bridge.) 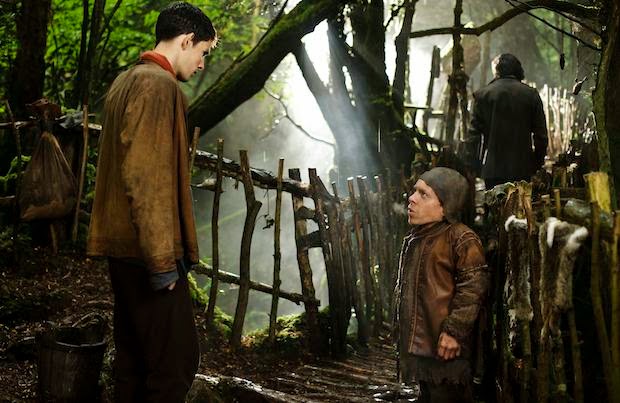 They cross the wasteland and see a castle tower in the distance with wyverns circling it and Arthur making his way to the gate while the wyverns are clearly hunting him. He makes it inside and drops the portcullis. But the wyverns are crafty and get in anyway. 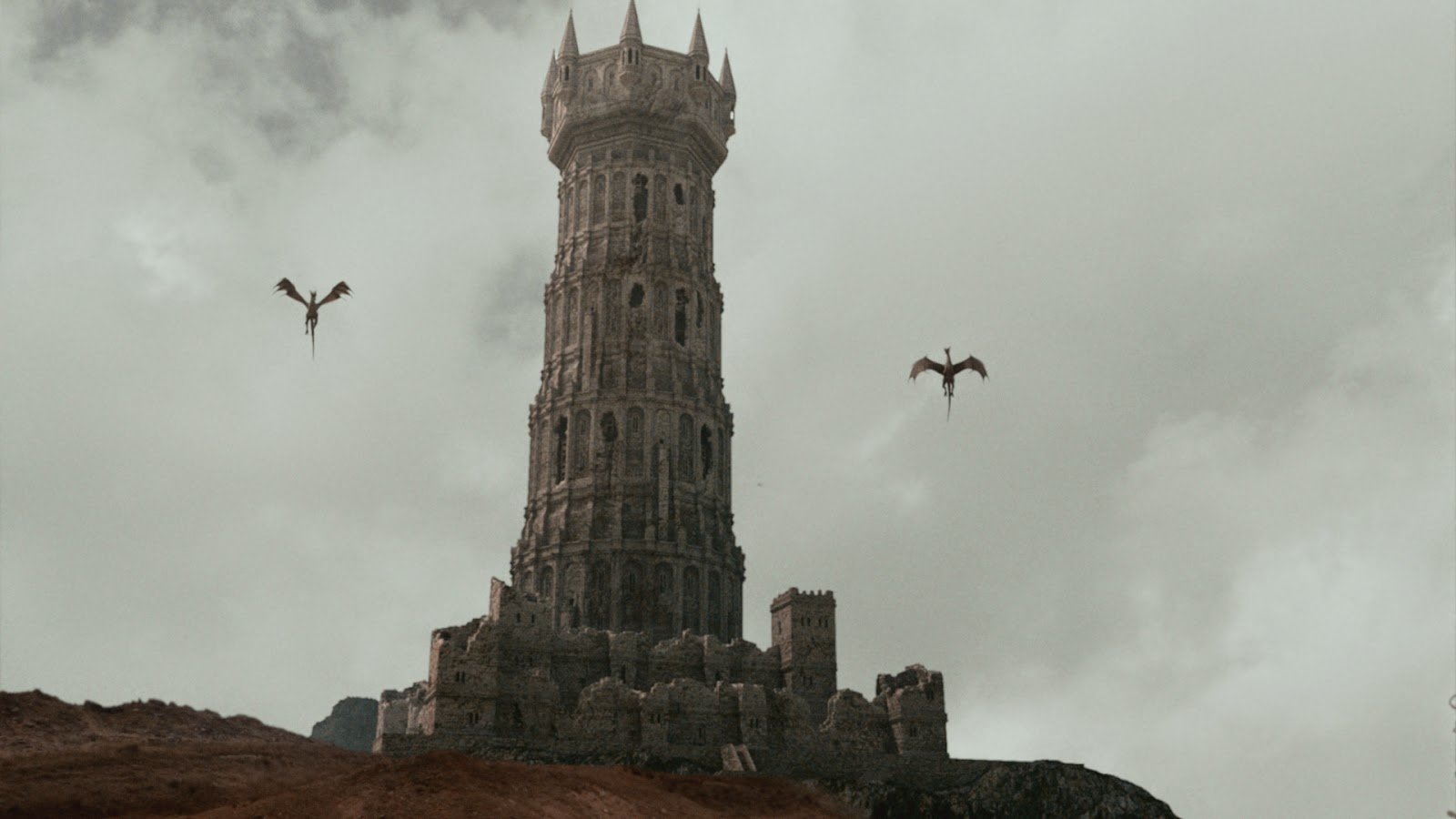 Arthur is growing weaker and is unable to fight off the beasts. He passes out,  but Merlin makes it in there just in time and sends a couple wyverns away with his Dragon Lord voice (and Jess’ panties fell off) then takes the enchanted bracelet off Arthur and he wakes up.

Arthur is all pissed because he’s supposed to be doing this alone. Then Gwaine busts in and stabs the one wyvern that was approaching and Arthur is prissier because Gwaine is there too. They all set off to find the trident of the Fisher King and Merlin (thanks to stepping on a trap) gets separated from them and locked in the throne room.

As it turns out, the Fisher King was a live and had been for centuries. It seems he was waiting for Merlin so he could give Merlin some water from the Lake of Avalon. But doesn’t tell him how to use it, just says something cryptic about it. Then tells Merlin he owes him a gift. And of course, that gift is death. He puts the cursed bracelet on the king, and the man blows away into magical dust and Arthur and Gwaine are finally able to enter the room. 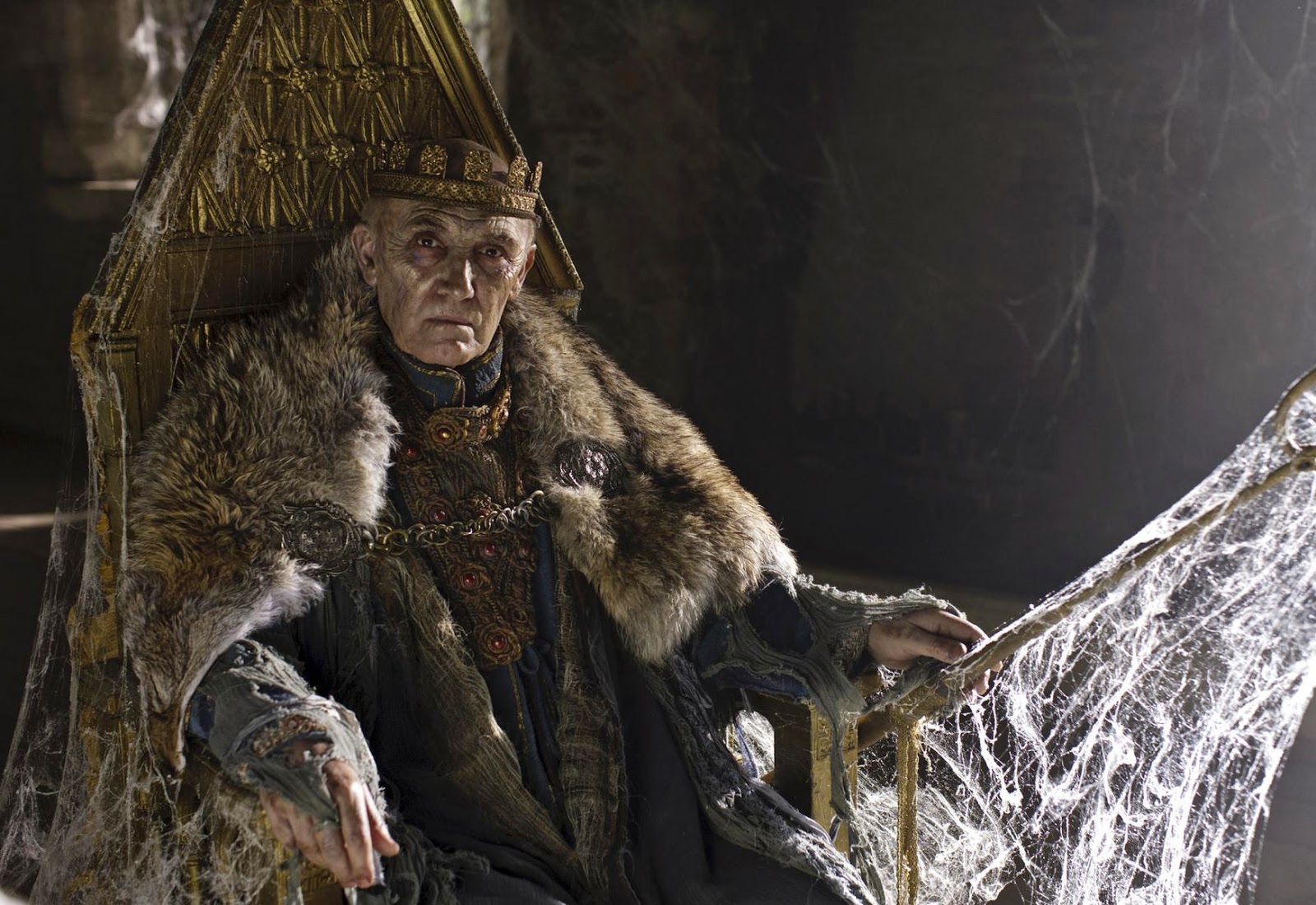 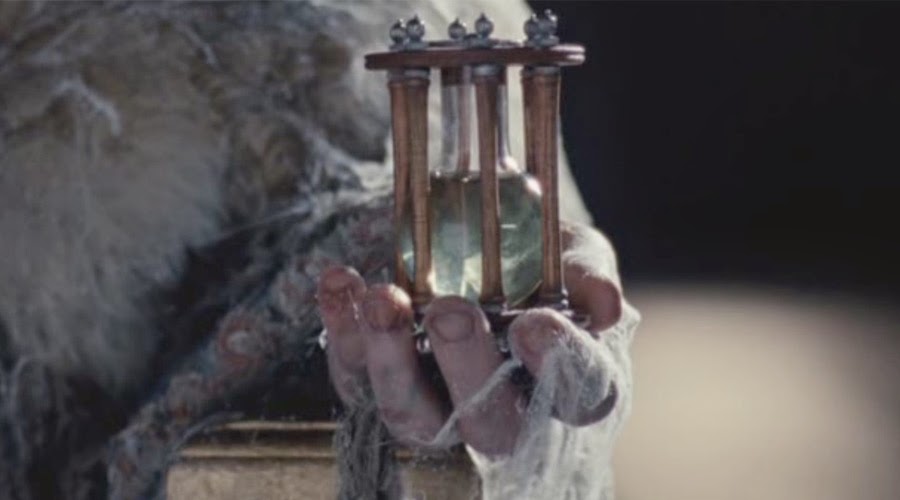 Arthur finds the trident and they all ride for Camelot. Gwaine leaves them at the border and Arthur swears Merlin to secrecy about his having been with him. Morgana sees Arthur return and drops her goblet in shock that he’s still alive. Morgana’s shock is witnessed by Gwen. And Merlin tells Gaius about the Avalon water. 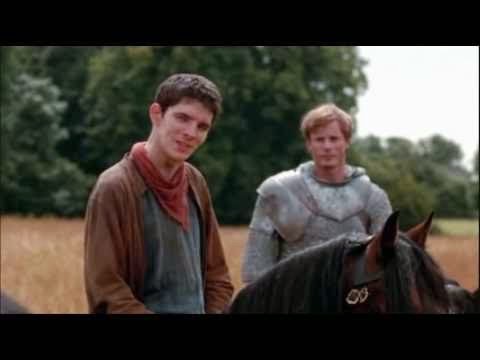 Okay...now for the questions.
1. If I’d written this episode...I would have maybe, oh, I don't know, had Arthur notice the glowing bracelet of doom. 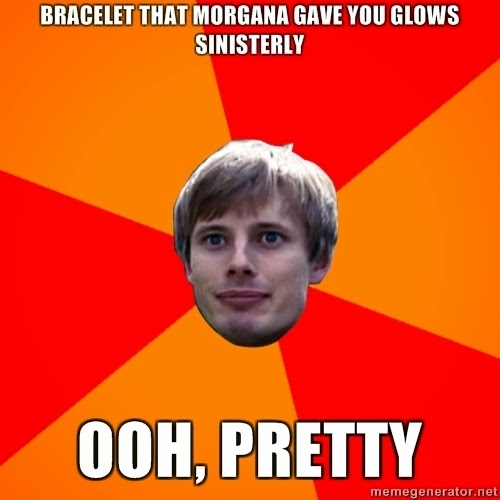 2. The thing I loved/hated most about this episode. Loved seeing Willow. Or you know, whatever his name was in here. Hated the really obvious diversion from Arthur's normal character. Okay, Arthur can be a total dick. No question. But in the end, he always pulls through and does the right thing. Even if it's uncomfortable for him and causes other problems. He does this stuff because it's the right thing to do. But at the end of this, he's totally down with lying about having completed his quest alone and unaided. And from the dialogue between him and Merlin, it's not because he's trying to protect Merlin or Gwaine. He's not owning up so he can be done with his quest and move on. This is very unlike that Arthur we've come to know over the last two and a half seasons.
3. Something you’ve never noticed about this episode before. How it seems like Merlin should have known what wyverns were since they're all dragon related and he's a Dragon Lord. Now, Jess did point out that the previous Dragon Lord died before imparting a whole lot of info to Merlin, but so much of his DL skills were instinctive, it seems that this should have been, too.
4. Favorite Costume. Okay, I know Gwaine's not really a costume, per say... 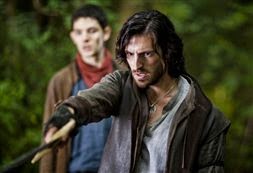 Here is Proof of some random head canon I’ve created. I didn't create it, but it's clear to me that Merlin and Gwaine could be getting it on.
What Merthur moment did Jess have the naughtiest thoughts about? I think it was when Merlin was waking Arthur up after stealing the bracelet of doom. 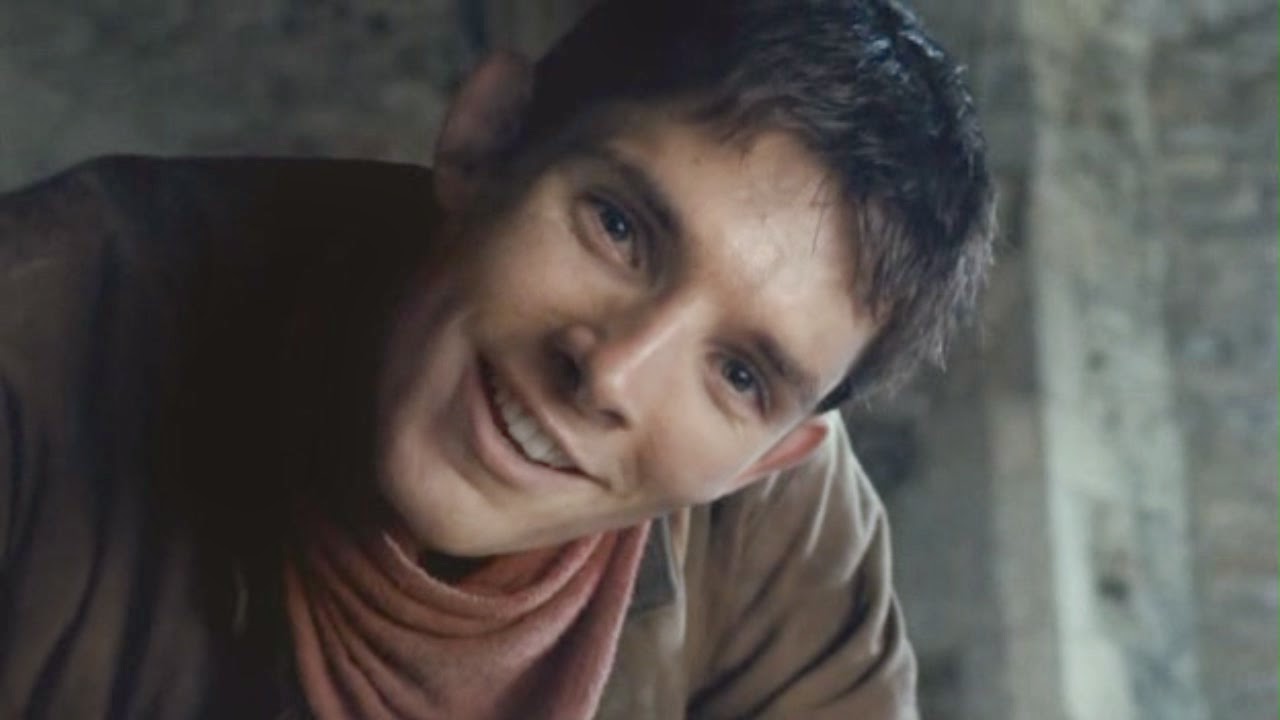 What made Jen lose her shit (in a good or bad way) in a bad way? I'm gonna go with Merlin not knowing what wyverns were. 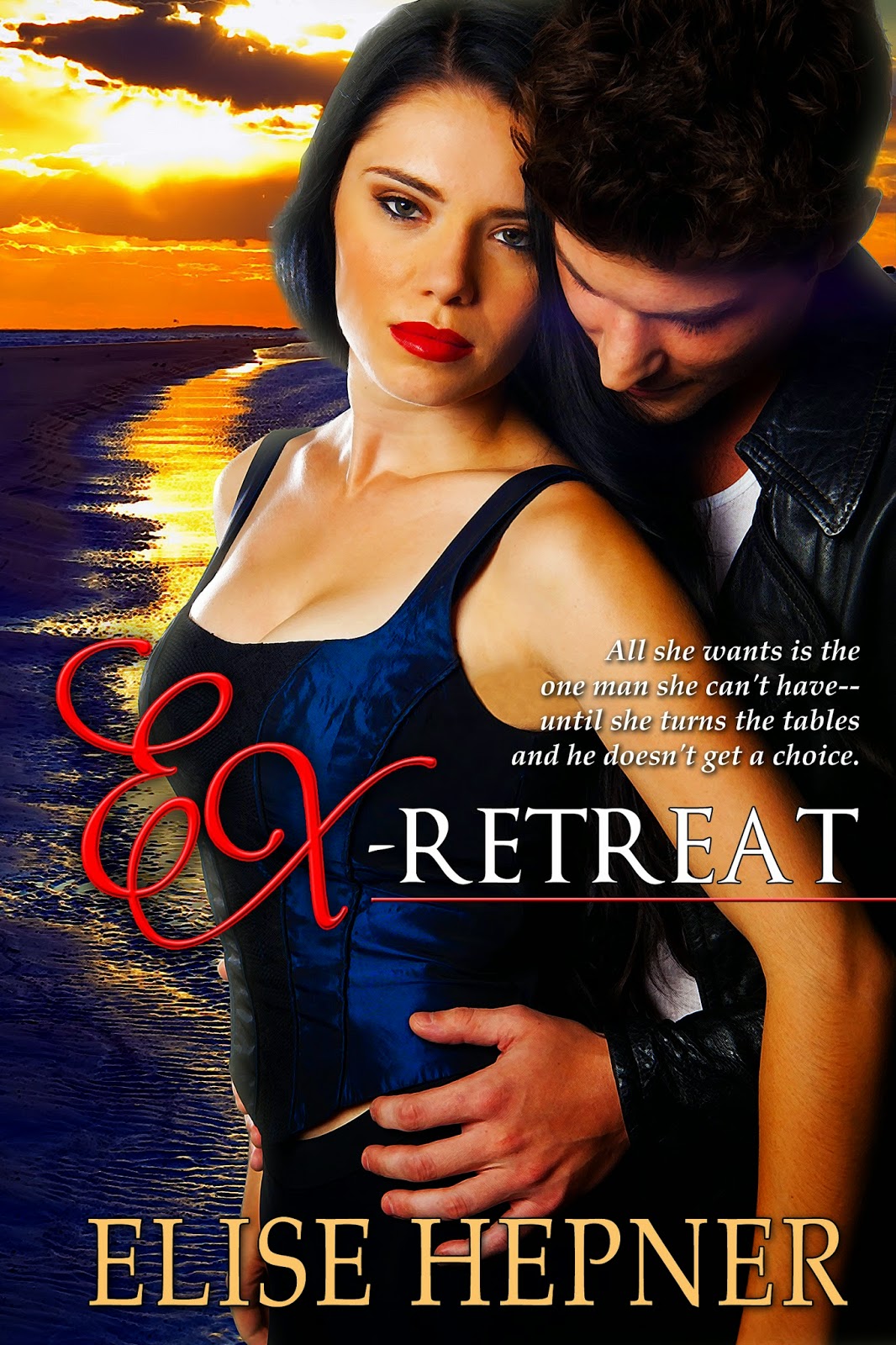 After Chloe Barrons’ fiancé cheats on her via webcam, she begrudgingly accepts her Type-A mother’s offer of a spur of the moment luxury spa weekend. But things don’t play out quite from point A to point B when she arrives drunk and disoriented on the front porch of a deserted North Carolina beach house. From the very start she’s caught off guard by Noah Knightly, a sinfully sexy, self-proclaimed committment-phobe who’s a handyman for his sister’s relationship rehabilitation center—a rehab where Chloe is the sole guest during off-season.

But faced with temptation, to stay guarded she’ll have to call the shots.

Noah Knightly shouldn’t have taken Chloe’s reservation. But in need of a second pair of hands to fix up the beach house, he throws all his sister’s rules out the window. Soon he worries that maybe he’s bitten off more than he can chew: each day Chloe cracks more of his cocky façade bringing down his guards to reveal a stuttering geek who has a hidden will to please her in any way possible.

With no way to ignore her pain, Noah sets himself up as a guinea pig to prove to Chloe that not all men are created equal—in or out of the bedroom. As Chloe comes into her own through every sexual session, Noah needs to decide if he’s man enough to accept the one thing he never thought he wanted—love.

Bio: Elise Hepner lives with two spastic cats and a very supportive, slightly crazy husband. There is never a dull moment in the house, unless the caffeine runs out, which it never does. She's a multi-published erotica author with Cleis Press, Ellora's Cave, Xcite, and Secret Cravings Publishing.

She's driven by her tea addiction and a tiny stuffed turtle her husband picked up from Disney World that sits on her desk and "supervises" her work.
When not writing (which is rare), she's watching countless hours of reality television, playing the Sims or shopping online. Plus there's that odd obsession with the color purple. Everything is purple. Visit Elise at her website www.elisehepner.com to keep up with her naughty ramblings, random tidbits and future work.
I have a newsletter where you can sign up for sneak peeks, contests, giveaways, new release news and other fun things: http://eepurl.com/pW8Sj