Okay, I've been a super bad blogger this week, but I have good reasons. Four hellish deadlines breathing down my neck, standing water in my damn basement due to the unending rain we've had this week, scads of appointments and today is my SIL's wedding. But still, I have it so much better than some people, so definitely not complaining...too much.

But I thought I'd try to redeem myself for my bad blogging ways by sharing the series of texts from my sister that I woke up to this morning. I hope they make you smile, too. :) 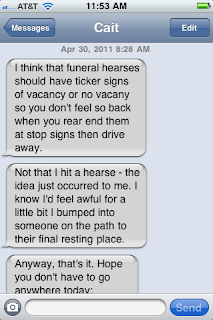 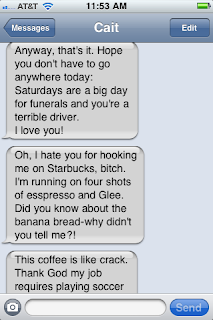 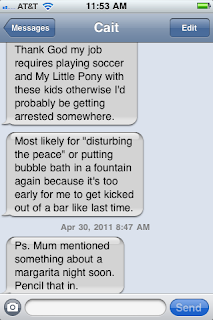 Someone Else Damn Special

April is a big month for birthdays. Some of my favorite people were born this month and today is the birthday of another dear friend. She makes me laugh, she's one of the sweetest hard-asses I know, she's an amazing mom, friend and writer, and she quotes Buffy with me. In short, I love this woman.

Please join me in wishing the wonderful Dakota Rebel a Happy Birthday!!! I hope this year is even better than the last!!! I love you Babycakes!!
Posted by Bronwyn Green at 12:34 AM 7 comments:

In case you're curious...

Stop by and let me know which genres baffle you! :)
Posted by Bronwyn Green at 8:48 AM No comments:

A couple years ago, I had the great good luck of coming across a story in my inbox at my old day job. It was fantastic, however, it wasn't what we published, so I made some suggestions about where she might want to send it, and I offered to take a look at whatever else she wanted to sub.

The short story here is she did and I couldn't be happier. Over the years we've become great friends. She's hilariously funny, amazingly giving and one of the kindest people I've ever met. She's also an awesome, writer, web designer and book trailer creator, tireless mom to three active kids and on top of that, she runs a minimum of eight miles a day and trains for marathons.

Also, it's her birthday, today! So Happy Birthday to my dear friend, Kris Norris a.k.a. Wonder Woman!!! I love you, babe!!!
Posted by Bronwyn Green at 6:27 AM 6 comments:

Of Anime, Water Aerobics and Roofing

So...yeah. It's been a long freaking couple of weeks. Last week was spring break which involved a 27 hour marathon of Full Metal Alchemist - an anime series my kids love. Killian and his friend Justin watched three seasons and a movie while Justin spent the weekend with us.

Corwin had his obnoxious friends over and I nearly lost my mind. Gray and Duncan are nice kids, but zOMG soooooooooooooooooooooooooooooooo annoying. High pitched screeching, an inability to choose to stay inside or go out and constant talking. They make Corwin look quiet. (no small feat)

I also started a water aerobics class at the Y with Brynn that I just LOVE. It's actually fun. I hate exercising mostly because I hate to sweat. Also, to be honest, I'm pretty lazy. But this is fun. It's like playtime...well, not those ridiculous ab crunches, but the rest of it is a blast. I love it. Of course, it totally kicked my ass the first two or three days, but I'm getting the hang of it. The downsize is that with travel time, it cuts several hours out of my day, so I'm just trying to work faster when I am working.

And we're getting a new roof. A completely new roof. Once the roofers got up there to reshingle, they discovered that the decking and a lot of the trusses were rotted. Sigh. I know it comes with owning a house built in the 20s, but damn! That was an extra 4K I wasn't planning on.

The noise has been deafening. Music and headphones help a little, but mostly it sounds like rhythmless Irish Step Dancing. Yesterday, they worked from 8am to 8pm. For about the last half an hour, the neighbor's three pit bulls howled the entire time and then their car alarm went off...and off...and off...while they were home. I think that maybe they're trying to get me back for the roofing noises.

On the plus side, I finished a book last week. Now, I have to do a ton of editing and finish a short that I need to sub by the end of the month. You know, if I don't lose my mind from all the noise, first.
Posted by Bronwyn Green at 8:29 AM 10 comments:

The Lesser of Two Evils

Over at Writer's Evolution, we've been talking about the best reactions that we've ever gotten when people find out exactly what we write. Mine is the story of how my job became the lesser of two evils. I hope you'll stop by. :)
Posted by Bronwyn Green at 12:34 AM No comments:

The Post Where Bron is Annoyed by a Paranormal TV Show.

I've seen Ghost Hunters once or twice and honestly, it doesn't really do anything for me. It's not that I don't believe in ghosts, because I do. I've had too many freaky things happen that couldn't be explained any other way.

So anyway, I watched the latest episode of Ghost Hunters the other night because they were investigating the Mission Point Resort on Mackinac Island. Having just been there last spring on the Field Trip of Doom with Corwin's class, I decided to tune in.

Okay, first off, I think if you're a professional ghost hunter trying to make contact with the other side, you should probably stay away from lying to ghosts. Telling a spirit that committed suicide over his girlfriend that his girlfriend is there and wants to talk to him is a super shitty thing to do.

Telling a little girl ghost that you have candy for her if she'll come out and talk to you is also super shitty. Who does that?

However, I'm even more appalled by a back lack of history and simple research. In fact, I had what's known in our family as "The Caitlin History Rage." This happens on a fairly regular basis when tv, movies or books eschew historical accuracy for the sake of a storyline. I won't even tell you what it was like around here when the DaVinci Code was at the height of its popularity. Suffice to say, it was ugly.

So, back to the Ghost Hunters, show. Apparently guests at the resort reported seeing a figure in long black robes. People had supposed that maybe he was a judge. At the end of the show when they were doing their post game wrap up with the guy that runs the resort, they said that they think it's unlikely that the ghost was a judge. They supposed that since the Mission Point Resort was also a college at one time, that the perhaps the black robed figure they saw was a professor.

Seriously? A professor? According to their "research" the college was open in the late 1960s. Guess what friend, college professors in the United States didn't wear robes in the late 60s. Tweed jackets with suede elbow patches? You bet. Long black robes? Not a chance.

But you know who did wear long black robes? Jesuit priests. You know...the ones who founded missionaries all over Michigan--especially in the U.P. In fact, the Iraquois dubbed them "Black Robes."

I bet if the Ghost Hunter actually had done research, they would have discovered that. Seriously...I'm not taking major research - this is Wikipedia level stuff, people. And the name Mission Point Resort? Gee, I bet that area was founded by missionaries and the name stuck. In fact, very near to Mission Point Resort is a statue of Father Marquette. Now, I'm not implying that the ghost of Father Marquette is wandering around the resort, but he wasn't the only black robed missionary on the island. The Jesuit priests continued to live among the native populace for years after Marquette's death in the 1670s.

I'm not even saying this should be common knowledge, but for fuck's sake, people. If you say you've done research - actually do it.
Posted by Bronwyn Green at 7:15 PM 7 comments: